Rampage on the Wii or the Gamecube? Who can tell? 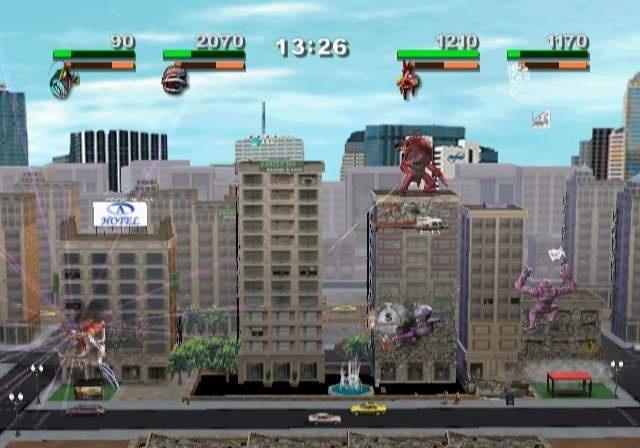 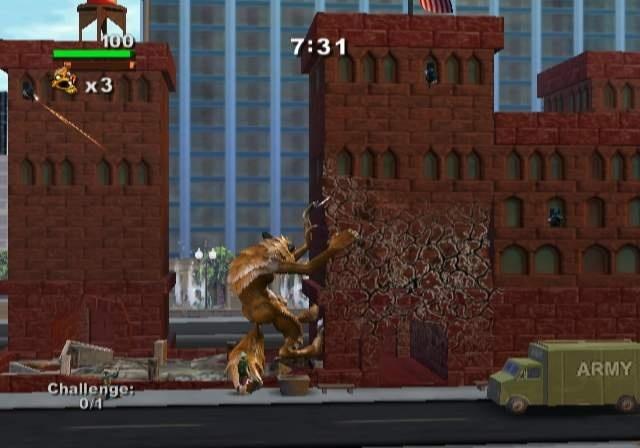 Rampage! Nothing like storming through a city stomping on innocent people and demolishing complete blocks. Rampage: Total Destruction is a spruced up port of the regular Gamecube game that incorporates the interaction of the Wii controller.

Anyone that has played rampage fully understands the story that accompanies the game. The soda company continues with its experiments and continues causing havoc. There is no need for elaboration because that isn't what is important. Rampage stays true to its roots with the same classic monsters and destruction style. However, it has updated graphics, controls, monsters, power ups, etc. In this installment the graphics are fairly smooth but not much better than that of the Gamecube version. You do get a few extensions that you don't receive in the Gamecube version but they are very limited.

One of the best features available in Rampage: Total Destruction is the vast list of unlockables. You are able to get thirty-seven monsters as well as moves for each. As you destroy and meet the level goals you receive power-ups and moves that you can use with your monster. These abilities and goals help break up the repetitive gameplay that Rampage is so well known for. The real emphasis with this title is the use of the Wii remote and it is incorporated pretty well. It looks quite odd when you have four buddies playing Rampage using the remotes. Waving the remote in a downward motion allows you to pound the ground, swiping it from side to side allows you to pick up items and throw them, etc. The Wii remote adds a little originality to the gameplay but at times it can be forgotten because the buttons are highly important.

The game is slightly in-depth with a pretty good assortment of cities that can be demolished. Of course you are allowed to roam the entire world in this game like its predecessor World Tour. You Rampage fans might also enjoy the fact that the previous titles are playable on this game without having to be unlocked. The Wii remote is NOT incorporated in their control scheme and you are forced to use the remote sideways.

The sound in the game is a little clearer than in previous titles as well as the Gamecube version. The music is nothing grand and you wouldn't expect it to be so in this game but the sound effects are pretty good. I was a little disappointed that certain things that warranted sound effects (like guns shooting) were silently occurring. This kind of irked me because things were occurring on the screen I didn't hear sounds for them. I don't know about you but the time of silent pictures has passed.

As far as the gameplay is concerned it is classic....bang it, smash it, eat it, and view random cut scenes. Would you really expect more from Rampage? The level goals given can be a little tedious at times and COMPLETELY trivial at others. The difficulty isn't necessarily scaled (as in rising as levels progress). The level designs are pretty detailed for the most part but encompass A LOT of repetition. Items are destroyed and leveled in the same basic way no matter what happens. As you play more and more you grow really tired of this title (especially without friends) and that is because the story is basically a repeat. If they used this game as a test of ADD every child in America would most definitely have it. I often found myself beating things without even thinking....as if I was conditioned to it. But, all in all I have picked it up a few times since my initial run through. It is a game that you play when you have nothing else to do and don't want to start anything that requires a lot of time. I also noticed that my friends enjoy playing each other quite often. Its usually the first game we compete in when Friday's game night rolls around.

The price is one of the main attractions of this port. At a cool thirty bucks (even cheaper when on sale) it is a fairly good buy. I wouldn't buy it if I already owned the Gamecube version because the controls and minor updates just aren't worth it. Don't forget that you are getting the other Rampage games (in their original form) in case you are a die hard rampage fan. Always pick the lobster....he looks the coolest.