All 4 One & One 4 All in Ratchet's Buggiest Adventure Yet 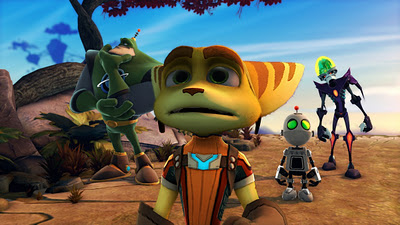 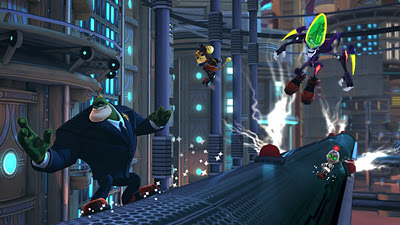 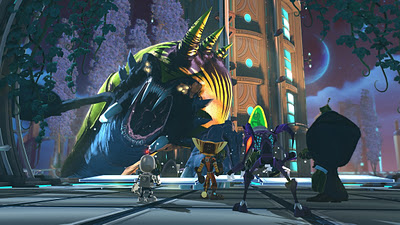 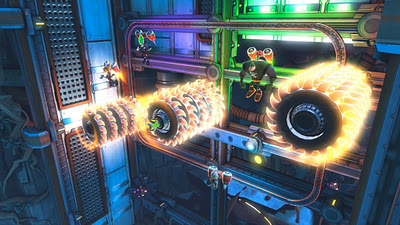 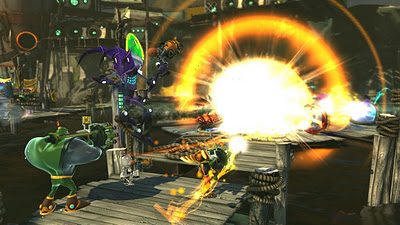 Insomniac certainly loves churning out sequel after sequel of the Ratchet & Clank series. Other series would have franchise fatigue by now, yet Insomniac chugs away and creates interesting and intriguing adventures each and every time (for the most part). This go around they're adding in a cooperative aspect to the gameplay for up to four players. The end result is Ratchet & Clank: All 4 One. Is this unlikely alliance of brains, brawn, and bros worthy of your precious time and bolts... er... money?

Captain Qwark has now become a president, and he accepts an anonymous invitation to receive a special award from a faithful admirer. Ratchet and Clank are beside him. When it turns out that this "award" was merely a plot concocted by the sinister Dr. Nefarious, Qwark still doesn't quite understand. Before Nefarious can exact his revenge on the trio, a mothership floats in, abducting the four. Saved by a little girl, the four decide to temporarily form an alliance to work together to get off the mysterious planet they are on. Can this team coexist? All 4 One's story is told through gorgeous cinematic videos. The only problem here is that these CGs cannot ever be skipped. Not even if one has already viewed the video. This is unacceptable for a game in 2011. No question. It's a hassle when one is slogging through a part of the game they've already played only to be greeted by an endless barrage of CGs. Poor showing, Insomniac, even if the videos are entertaining and oftentimes comical the first time through.

At the start of All 4 One, players choose from one of four characters: Ratchet, Clank, Qwark, and Nefarious. The only differences between the cast is what lines of dialogue are heard while playing and what character-exclusive weapon can be purchased for said characters. Weapons cost bolts to buy. Weapons bought can then have their ammo, power, and extra ability upgraded. For instance, the Combuster, a pistol, can be upgraded to shoot three bullets that spread out instead of just one shot. Bolts are earned by smashing boxes and by completing levels with the most creatures collected, most bolts gathered, and most enemies defeated.

While there's no list of trophies for doing so, each of the four characters has to collect their own color of Hero Bolts. There are forty-something Hero Bolts in the game to collect. They're hidden just out of normal reach in areas where the camera doesn't normally focus on. Costumes are unlocked for gathering these. Ratchet can turn into a ninja, snowman, or even a robotic pirate. Shiver me timbers, Ratchet! Aside from Hero Bolts, skill points return. These unlock when a player accomplishes certain in-game tasks from leveling up weapons to beating a portion of a level without taking any damage.

All 4 One is divided up between areas which are then divided up between fairly linear levels. There's seldom any chance to go off the beaten path. Players are competing against one another to collect the most bolts as well as helping each other clear the levels. One level has players running from a giant monster stalking them in Luminopolis while another has players grinding on rails, leaping over electrical charges, and avoiding gaps. Levels are about ten-to-twenty minutes long, and it takes anywhere from seven-to-ten hours to beat the game.

All 4 One can be played solo with a computer-controlled partner or with friends, strangers, or a combination of the two. When playing alone the computer helps out as one would expect it to. Cooperative puzzles are the norm in All 4 one, and they range from sucking up a partner with the Vac-U device and shooting them across an otherwise uncrossable chasm, using a mortar slam on an enemy (using the Vac-U gadget to suck up a friend and then launching them on top of a foe), and smashing down a series of buttons that cannot be hit by someone by their lonesome as they're spread out too far. When the computer dies (which happens annoyingly a lot), they will respawn after about five seconds. If both players die at the same window of time, they must start at the last reached checkpoint. Thankfully, there's a decent amount of these checkpoints, so there's not much in the way of redoing large portions of a given level. When two or more players use the same weapon on the same foe, a circle enlarges over the enemy, causing a huge energy reaction called Overload. This attack does more damage than an attack by someone by themselves. Overloads are key in taking out giant enemies more quickly.

Speaking of giant enemies, there's a myriad of mighty bosses to beat and take out. My personal favorite encounter has everyone riding on jetskis, avoiding the chomps of an underwater behemoth as well as leaping over mines. This goal here is to charge up several electrical rods in order to electrocute the aquatic annoyance. Other encounters are more traditional in their design, but they allow for some serious teamwork, hectic action, and cooperative combat.

Additionally, players can hop online (pending they have a PSN Pass. Thanks, Sony). When playing online, one can opt to host or find a game. When finding a game, players can select if they want to find games by which character they want to use, by level, by difficulty, and by games already in progress or not. When someone joins a game, the host can decide whether to let them join immediately, thus transporting everyone back to the last reached checkpoint, or whether to have them wait. Hosts can kick unruly guests out of their games during gameplay. As everyone shares the same screen, teams must work together to move at the same time. Transporters, cannons, and launchers that blast players to new areas of levels will only function when all teammates have pressed the triangle button on the aforementioned mechanisms.

Unfortunately, not all is well when playing with more than one person. I've experienced cheap deaths from imperfect camera angles, been pushed off cliffs by the camera, and even saw someone die in the shop screen. This made it impossible to continue, and I had to quit the game and go to the PlayStation 3's XMB. How does that even work? Sometimes one's hookshot wouldn't grab onto the correct character, meaning certain death for the player, and other times players got caught on enemies. To say All 4 One is buggy is doing the game a disservice. It's way worse than that.

Each players gets four hits before they die. Collecting Nanotech restores lost health, and those who lose all their vitality perish. When a player dies, they lose a portion of their bolt total. Those who are down can be revived by another player's Vac-U, but there's a strict ten second time limit. If the player is not revived by then, all players must start at the last checkpoint they arrived at.

All 4 One is one graphically impressive game. The lighting is phenomenal, the art design is astonishing, and the animations of every creature, critter, character, and monster is marvelous. That's not to say that the title is technically sound. Far from it. When the action gets heated and there's tons of explosions happening all around, the game slows to a crappy crawl. Online play can occasionally be plagued with lag, and in a game where precision jumping is required, this makes for some serious frustration. On the sound side of the spectrum, the orchestral score is appropriate for every level and sounds superb. The voice acting is well done as one has come to expect of the Ratchet & Clank franchise. All-around, a mixed bag when it comes to the presentation of All 4 One.

Ratchet & Clank: All 4 One is bittersweet for me. On one hand, playing with four people against insurmountable odds is appealing. That said, the execution isn't as great as it should be with cheap deaths, a confounding camera, and glitches galore. This might just be the worst Ratchet & Clank game in a long line of excellent titles which is unfortunate. I had high hopes for a cooperative Ratchet & Clank, but these technical issues keep it from being anything other than just slightly above average.
Review Page Hits: 0 today (101 total)
mediahook