The last adventure featuring Playstation's favorite duo. Do they go out in style or fizzle into the sunset? 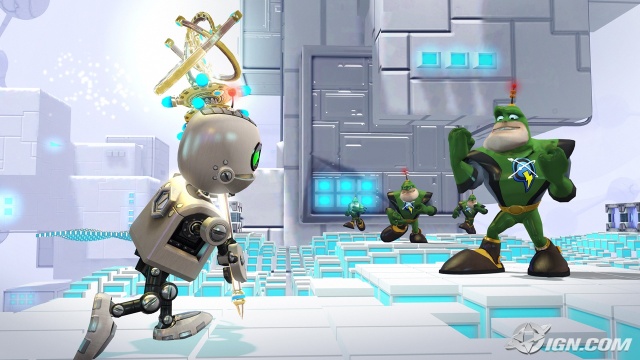 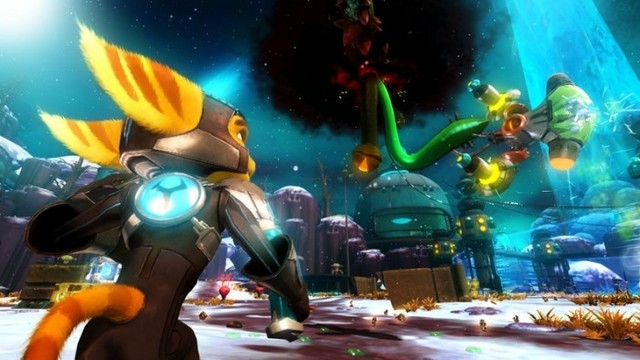 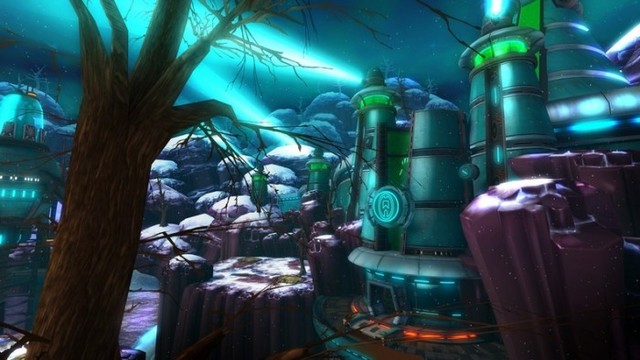 Originally starting way back in the days when your Playstation had a 2 in it, Ratchet and Clank have consistently been one of the exclusive Playstation's titles that never disappoint. Having already made one trip to the current generation in Future: Tools of Destruction, they are back once again for what is to be their "last" title together. Oh, and don't forget, Captain Quark is along for the ride as well.

If you've owned either of Sony's systems since the PS2, you really should know what this game is all about. Ratchet has always been about the prefect blend between 3rd person shooter and platformer. This game doesn't change any of that, but does add stuff to the formula that is very welcome to the series. The story of this game takes place right after the last game with the good guys chasing after Dr. Nefarious who (of course) is trying to destroy the world. The manner in which Nefarious is trying to end all things is via the Great Clock, a centerpiece of the game. By turning back time he can "wrong every right" and let all of history's villains run wild.

One of the more unique aspects of this game, when compared to others in the series, is the fact that you play the vast majority of the game without Ratchet and Clank being attached to each other. Games in the series have experimented here and there with separating the heroes for short bursts of time, but not as much as this game does. Ratchet's story focuses on his pursuit and assistance of General Azimuth (turns out Ratchet really wasn't the last Lombax) while Clank's story is based inside the Great Clock and his task of protecting it from Nefarious.

Ratchet's part of the game mirrors everything that we know and love about the series. Lots of enemies, lots of guns and lots of platforming. The mix is perfect as always and it's just as fun as you would expect. Along with the game-play we have come to expect, the game has the goofy weapons we expect as well. There are some old favorites like rocket launchers, the Constructo Pistol and the Groovitron. Then there is new stuff like the Sonic Eruptor (a belching alien frog-like thing), the Spiral of Death (a spiral that shoots a large saw blade that you can control with the Sixaxis controls) and the ultimate weapon, the RYNO (which shoots a combination of bullets and rockets while playing classic music). The series has always been known for its creative, fun weapons and that doesn't change here.

Along with the stuff we have come to expect from the series, Ratchet takes a heavy dose of inspiration from Super Mario Galaxy. There is more of a space exploration element in this game than any other in the series. You get to fly your ship across the universe and explore planets, help stranded citizens or even engage in combat. The best element is the planet exploration which is a direct copy of what Mario did so well in his Wii masterpiece. All of the planets are round and play just like what you would expect from the plumber's last 2 games. The planets can be avoided for the most part, but they are a lot of fun to explore. You get collectible rewards and upgrades to your ship by completing each planet. All of the planets have a different set up with some requiring that you beat a certain amount of enemies or jumping your way across some of the most challenging terrain in the game.

The other side of the game focuses on Clank and here is where the game really shines with welcome additions. Clank is tasked with protecting the Great Clock and he is lead from room to room by Sigmund, a goofy robot who is a "Junior Caretaker" of the clock. Clank's levels do not focus heavily on combat and instead bring puzzles and platforming to the forefront of the game. The puzzles that Clank must solve are all related to time and recording "multiple selves". What this means is you will enter a room with several colored pads on the floor. Step on each pad to record your actions and have all of the recorded selves work in perfect harmony to solve a puzzle of platforming and button pressing. Insomniac did a fantastic job introducing the player to the puzzles and then stepping up the difficulty on every subsequent section so that by the time you get to the final few puzzles, you get some mind benders. Clank also gets the ability to manipulate time with Time Bombs that are little bubbles which help to slow platforms down for easier travel.

Eventually Ratchet and Clank do connect and finish of the game together. Once they connect it's back to the Ratchet and Clank you have played on every game prior, and that's not a bad thing at all. This game is a pretty rewarding experience. You feel accomplished by the end of it. On top of the excellent game-play you get to stare in awe at one of the best looking titles out there. The style of the game is typical Ratchet fashion. Bright colors with very well animated characters and tons of stuff going on in the background. With so much happening on the screen at all times it helps to give the game a sense of life that might not otherwise be there. The sound production works as well as ever with great voice acting and awesome weapon effects.

This is a must own title for any fan of the series. If you haven't player the series it's an awesome starting point. The main game is a ton of fun and has a lot of humor. On top of that, Insomniac did a wonderful job of adding additional items (planet & space exploration) to give you more to do and extend your play time. If this really is the last Ratchet and Clank game (which I have my doubts) they went out in a blaze of glory. Hopefully they keep blazing.
Review Page Hits: 0 today (226 total)
mediahook