More of the same Ratchet and Clank fun with some nice improvements added on. 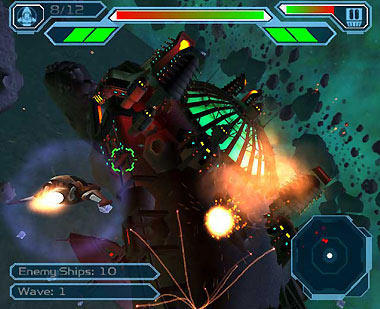 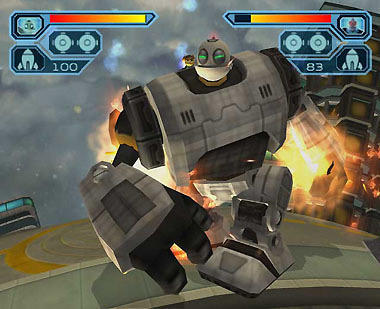 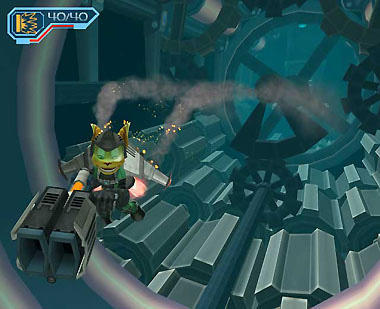 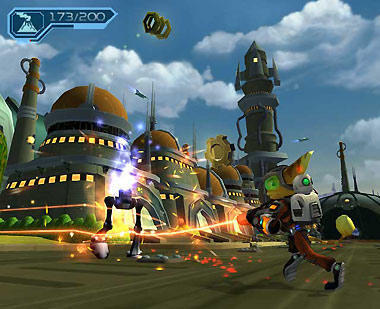 Going Commando is the second game in the Ratchet & Clank series. The story and gameplay are very similar to the first game. You play mainly as Ratchet, a cartoon-like character, with various abilities and tons of weapons. You travel around in your spaceship, landing in various locations in the galaxy. At each location (typically a planet), you have a few paths to take that lead to goals you must complete to make progress in the game. Either you gain access to a new location or are provided with a new weapon or gadget.

Gameplay and control has all the great smoothness of the original Ratchet & Clank. Saving occurs automatically for the most part, and dying just means you start over at a continue point. As in the first game, you collect bolts as you play from crates which you smash open and from enemies you defeat. With the bolts, you can buy new weapons and ammo.

Each gadget you obtain generally gives you some new ability, like walking on the walls and ceiling with magnetic boots, swinging through the air with a chain-hook, or gliding through a canyon on a glider. Many of the same gadgets are there from the original game, though their use tends to be toned down a bit. Plus a few new gadgets have been added for some fresh challenges.

In a couple points in the game, you are faced with a specific challenge like a race, robot battle, space battle, or an arena battle. This is similar to the first game, but with Going Commando, new layers have been added. Once you complete the first challenge, you can go on to complete a series of other challenges to gain large quantities of bolts.

There is also a fresh bank of new weapons to try out on your foes. Some included are gun-turrets you can throw down that will fire at your enemies, a spherical shield, and a mini-nuke. Many of the weapons are similar to the original weapons from the first game. Early in Going Commando, you get a chance to buy some of the old weapons. If you still have your save game from the original, you can get them for free.

One nice new feature for the new weapons is that they will get automatically upgraded if you use them enough. A bar shows you your progress on each weapon. Once you complete the bar, your weapon gains significant new powers. Also, like the first game, there are various secret bolts to find on each level. But, in Going Commando, the bolts are platinum instead of gold and instead of being used to buy gold weapon upgrades, they are used to add special mods to your weapons, like lock-on, acid, and shock. To be honest, I didn't think much of these upgrades.

Going Commando offers a couple new materials you can collect. Raritanium can be collected on some planets and in space battles. You can trade it in for upgrades to your ship (which help in space battles). Also, there are a couple planet locations where you must collect crystals from a large open area. In the area, monsters pop out of the ground to stop you, Generally, you trade-in some initial small amount to get a gadget for story progress, but if you collect more, you can earn vast quantities of bolts.

Compared to the first Ratchet & Clank, I felt the story in Going Commando was weaker and the cut-scenes lacked some of the humor. I found that my drive in the game was much more focused on upgrading my weapons, and I barely cared about the story.

After you complete the game, you can choose to play through again in challenge mode. You get all of your weapons and upgrades and many of your gadgets. You can buy new mega upgrades for your weapons to further upgrade them to amazing levels of destructive power. Also, you get an increasing bolt multiplier if you avoid being hurt as you play. This gives the game good replay value, but shows how strong the goal of upgrading your weapons has become.

As in the first, there are also many skill points you can get as you perform certain secret tasks. The skill points unlock some fun cheats like giving ratchet a big head or a tuxedo.

All-in-all, like it's predecessor, Going Commando offers a very smooth and enjoyable platformer experience. Gameplay is fluid with lots of new gadget and weapons to try out. Play itself is widely varied and fun.