Sandbox-style gaming takes a trip out West and delivers a great single player experience and an overall impressive game, albiet with a few bugs. 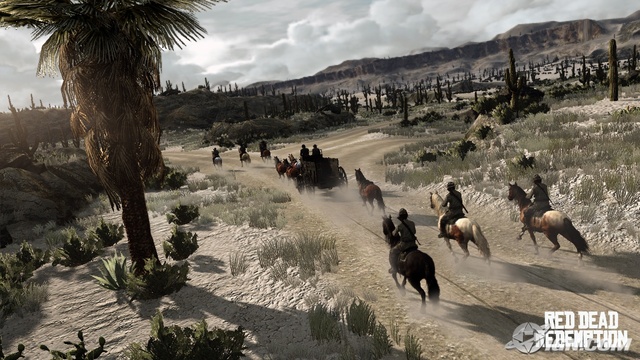 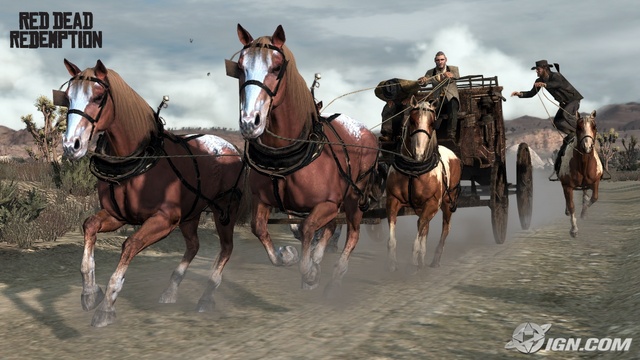 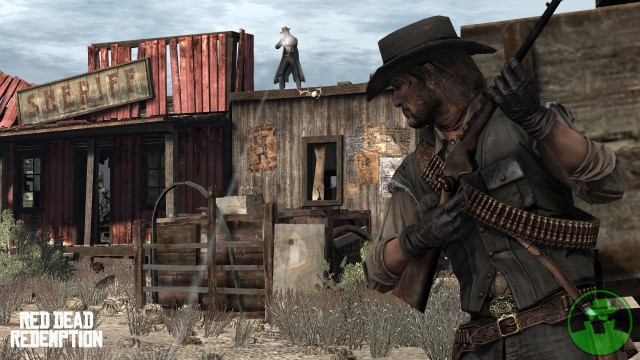 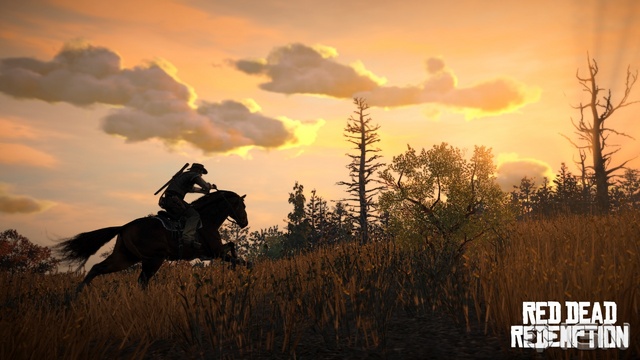 Red Dead Redemption, this game gained more hype in the two months before its release than any other game I can think of. It went from relative obscurity to headlines, and why not? Rockstar has a reputation for making sandbox games that are nothing short of phenomenal... but a cowboy game? I was a bit skeptical at first but after watching a few videos and reading up on the game I decided that I had to give it a try, boy am I glad that I did...

Red Dead Redemption takes place in the early 20th century with the traditional ways of the West giving way to a new modernized lifestyle. Not exactly the setting I am used to for westerns. But it works well for the game; our antagonist turned protagonist Marston is an old school guy trying to survive in this new environment.

Graphically the game is fantastic. While the textures aren't the sharpest ever they lend well to the gritty feeling of the west. And the sheer scope of the landscapes is amazing. Rockstar had it rough trying to make a mostly empty environment seem interesting, and they did well.

That is really what I like most about this game I think, the feeling of it. The atmosphere, characters, weapons, and audio all come together to make this feel like you're in the west; it's an amazing experience. From horseback gunfights to train heists Rockstar absolutely nailed it on this one.

The audio is also top notch, with environmental effects fitting the look and weapons having a realistic "bang." Voice acting has been praised by many people, I don't think it's anything particularly amazing but it's certainly not bad.

A lot of people make comparisons of this game with Grand Theft Auto... well... it's true. They are very similar but they do play quite a bit differently. In GTA your actions in the world don't really affect how you progress through it. Mow down 50 people in the street? That's fine, go to your next mission, no one remembers. In Red Dead Redemption though, with the honor and fame systems, what you do in the world lives on with you. If you are a hero and help the people of the land you will be lauded and side missions will be in abundance. If you're a stone cold criminal people will fear you, how you play is up to you, something I truly enjoy in the game.

The pace of the game is very flexible... you can sprint through everything trying to reach the end objective or you can do what I do, take it at a lazy (dare I say it... cowboyish?) pace, completing side quests and challenges such as killing and skinning certain animals or finding treasure.

The game is very stable in Single Player with no frame rate hiccups, torn textures, etc. There are a few times when it needs to load a mission but they are few and far between. Load times for an average mission are maybe 20 seconds (note: I have the game installed to my hard drive, without being installed they may be longer).

Multiplayer is different. The first time I tried playing free roam the whole thing was awful, I think it was a server problem though. Textures disappeared (I never saw my weapons or my horse... riding an invisible horse is a bit odd), the connections were really bad, and my game crashed. The second time I couldn't find anyone to free roam with but all the above issues were gone and it ran smooth. Thankfully patches have corrected the vast majority of the connectivity issues; when the game was brand new it was a major pain.

Now for the bad:
Dead Eye, while a cool idea, needs to be nerfed. In Single Player it's alright I guess, it makes things a little easier, but in MP if you have Dead Eye and your enemy does not, he is pretty much dead. When using Dead Eye you have perfect accuracy and your weapon shoots like a machine gun, so you pick it up, highlight an enemy (doesn't matter how far away he is) and let it rip... yay...

Multiplayer is pretty boring... sadly it's true. Definitely the highlight of MP is co-op free roam, you can go and clear gang hideouts with a group of friends which is fun... the first time. Even though Rockstar is adding in more free hideouts, after a time or two on each hideout you'll probably have had your fill. The majority of the time you're in a public free roam lobby you're being shot by random people for no reason... it gets old pretty quickly.

The competitive MP is an absolute snore session. It's essentially a mad dash to the Dead Eye pickups with maybe a fire bottle kill here or there. I've only played competitive a few times... it kind of reminds me of Doom 3's deathmatch.

The controls could be better and more intuitive. Sprinting, ducking, diving for cover, it's not very crisp. I've still not gotten used to switching weapons with the wheel (doesn't help that I finished Bioshock 2 last week and the "weapon wheel" was on the other bumper). The horse controls are decent but take this advice: In the Options menu under config change "Horse Control" from "Horse Relative" to "Camera Relative." This will save you a ton of headache when trying to look around while riding your horse. I had a friend almost give up on the game early because he was so frustrated with the horse camera...

Sometimes there are environmental glitches that pretty much leave you dead in the water. For example, one guy wanted me to talk to his wife so I went and lassoed her. When I went to pick her up after hogtying her the animation of putting her on my shoulders was there but she was still lying on the ground. It would not let me drop her or do anything else, I just walked around town unable to do anything. My only option was to load a save game.

Also, there will be times when running and jumping through the world that you get stuck on various objects. On a bounty hunter mission I hogtied the bad guy and put him on the back of my horse... then I fell through the earth in a crazy glitch. Thankfully I didn't die, it was just odd. Sometimes the shops do not always want to open. If you go to a town waiting for a shop to open it won't always happen. I tried sleeping (6 hours pass when you sleep) 5 times in a row, the shops never opened (that's 1 1/4 days...).

My one final gripe, there is a TON to do in this game but it doesn't always give you enough time to learn what to do in each situation. For instance, my first duel... I was trying to shoot the other guy while reading the instructions on how Dead Eye works... I'm still not sure what I did.

Despite that list of issues though the single player really is a lot of fun, although it is pretty easy. Overall if you enjoy sandbox games or you had dreams of being a cowboy when you were young you need to give this one a try for sure.
Review Page Hits: 0 today (154 total)
mediahook