Journey through 15 levels of mayhem as you play as each of the heist members shortley after the job and make your way back to the safe house. Travel on foot and by vehicle while trying to avoid the cops and civilians, all of whom stand in your way. 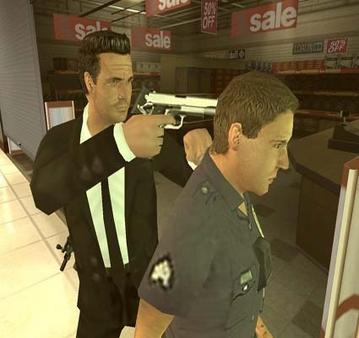 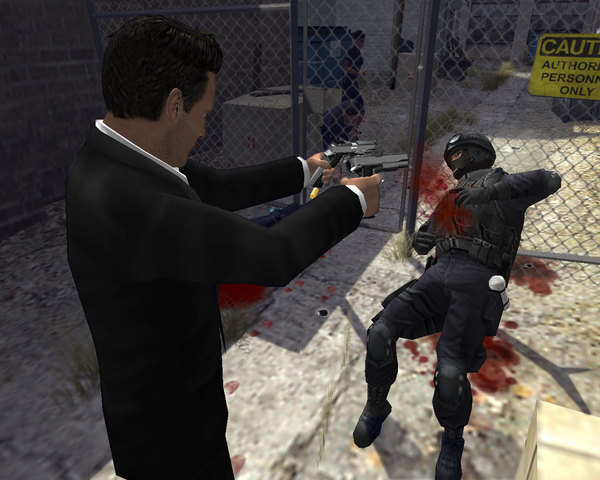 Reservoir Dogs is a game that is based on the movie of the same name, except this isn't a video game that was made to follow the movie's path. The main difference is that in the game you play as the heist members and Nice Guy Eddie as you try to make your back to safe house after the heist went terribly wrong. Unlike the movie where most of it takes place in the safe house the game puts you in the characters' shoes as you try and make your way back to the safehouse, with each character taking on a different path. The levels are designed to be played in the eyes of the reservoir dogs as they escape the jewelry store so if you've seen the movie before you will get a rush of excitement in seeing how their journey played out since the movie doesn't follow that part in detail.

The game features 15 chapters of gameplay, with nine of those being on foot. Each character takes you on a different journey, which include back alleys, malls, stores, garages, car lots and many other places. As you progress through the levels you have to make your way to safety by avoiding cops and civilians. Reach each destination safely and you will view what happens next through the animated sequence and move on to the next level with a different playable character. Each character in the heist is playable, including Nice Guy Eddie. Some characters will be playable through multiple levels but others are only playable once.

Other chapters are driving sequences, you must drive to the safehouse in one piece while avoiding heavy traffic and many cops. This is one place where the driving could have been tweaked a little more. The handling on the cars is pretty crappy and has no cornering whatsoever, throw in the fact that the cops are super skilled drivers and it becomes frustrating to do the driving levels. Maybe one or two chapters are fun to do but because the traffic is so heavy, the destinations can sometimes be very long and the cops seem to be invincible in vehicles most of the vehicle missions won't be played on another playthrough.

Another good thing about the game is that you have the choice to be a certain type of criminal. Each mission gives you a rating at the end, for example you can be a stone cold killer or a professional. Depending on what choices you make you will gain a career rating of either Psycho, Consummate pro or a professional. The ratings depend on how many people you kill or restrain. If you go into the level with guns blazing you will become a psycho but if you restrain everybody and don't kill anybody you get the professional rating. That is a great ability to have in a game, instead of killing everybody you can take hostages and then have the cops drop their weapons and retreat to the walls, that definitely makes the game a lot easier than going and shooting at everybody.

The exciting thing about having choices is that at the end of the game you will get one of three endings depending on your career path, however you can replay any levels and try to do a different path to unlock the other endings. With the exception of the handling of the vehicles the game is relatively easy and very short. And with the game coming out in 2006 it doesn't have very good graphics for its time.

The good thing about the sound, however, is that Michael Madsen lends his voice to his character and he does a pretty decent job. All the other characters' voices are done by random voice actors but their performances are okay at best. Another great aspect of the game is that the Super Sounds of the 70's songs are included in the game, which can be heard while driving the vehicles.

The game also offers a small incentive to collecting the files hidden throughout each non vehicle level. Collect each one will get you the artwork from the game. The artwork, however, isn't very good so you may not want to take the time to search for them, if you decide to locate them they are very easy to find and there aren't that many of them so finding all of them will be a breeze.

So even though the game is short, has bad graphics and mediocre gameplay it is still a decent game at best. This game isn't for everybody and I would only recommend it to the folks who are fans of the movie. Everybody else might not like the pace of the game but the game and rightfully so but if you're a fan of this or any other gangster movie or game this might be a solid game for you to try.