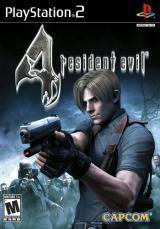 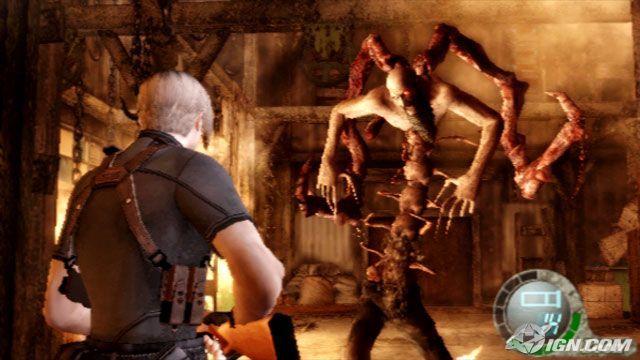 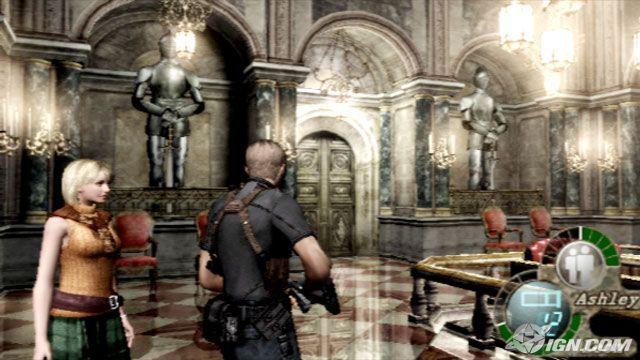 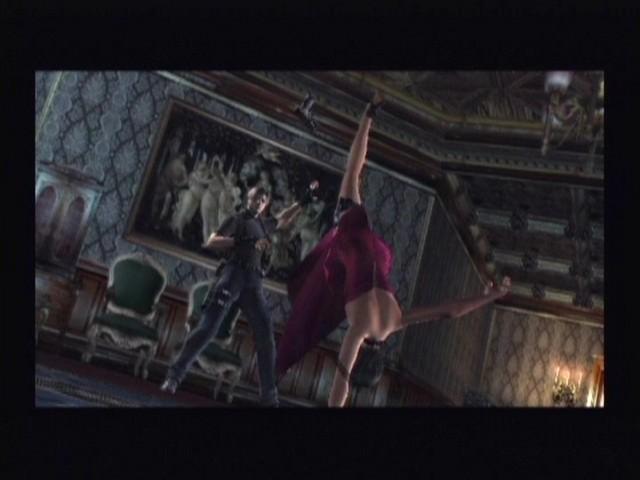 Explosives, guns, the undead, so you think this is just the same old song and dance right?Think again.

Resident Evil 4 takes place six years after Resident Evil 2, and the Umbrella Corporation has been destroyed. Leon is a big boy now, and not some wet behind the ears rookie. As a matter of fact, Leon is no longer a cop.......he's a Federal Agent. The President's daughter (who is actually not bad looking, for once) has been kidnapped by some crazy organization in a remote part of Europe and Leon is sent to find her. He has some European police with him , but like everyone you don't get to control in a Resident Evil game, they prove to be useless and die about two minutes into the game. Since I don't want to give away the actually pretty good story of RE 4, I'll just start breaking it down.

Graphics - I don't think I have ever seen graphics this good on a PS2 EVER! Everything is so smooth, crisp, and clean. The lighting is a little dark, but that can be fixed in the options. The fire looks quite real, as does the water when you're in the boat, or on the jet ski (which I won't spoil for you.) I was very impressed with the graphics of this game, because in every RE game, including the ones for PS2 and GC, the characters all had a "blocky" look to them. Now they actually look like real people. The character design is almost flawless. The only thing they did wrong was make the President's daughter somewhat attractive without the need of surgery (*cough* Chelsea Clinton *cough*). On that note, that will probably get me sniped by the C.I.A. or something, so let's move on.

Learning Curve - I admit I am a hardcore fan of the RE series, and I had grown quite fond of the "Up is forward no matter what way I'm facing" type of controls. But the new camera angle and new motion made this game even better than I ever expected. It did take me a few levels to get used to it, but after that, I don't think I could go back to the other type of controls ever again. So I guess I won't be playing the old RE games, huh? Every gun you get has a laser sight on it, which makes for easy headshots. But don't get discouraged. Remember that the whole "Headshots = Kill" thing doesn't apply here, which is something I also had to get used to. All in all, I think it took about 15 minutes to really get comfortable with the new controls and the fact that there is no "Auto-Aim"....so cheeser's BEWARE!

Sound - Okay, here is what completely SOLD the game to me. I was terrified the whole game, not because the game is scary, but because the sounds these crazy Europeans make are just downright eerie. They are a little monotonous, and I can't understand a damn thing they are saying, but later in the game I could have sworn I made out the weird hooded people yelling something like "Morbid STD's" which is just creepy in its own right. The voice acting is great, but in some spots, it feels like I am watching one of those old Chinese movies where you hear them talk, but they move their mouths like five minutes later, lol. The added sound effects are good too, like bats flying around in caves squeaking or whatever (for once crows and bat's are not going to kill you). But all in all, the sound effects were superb.

Gameplay - The gameplay in this game is totally awesome. You BUY weapons in RE4, which was really new to me, lol. But it does make for some interesting conversation with the one crazy European who isn't trying to kill you. He is trying to help you kill them (personally, I think he is confused as to what side he is on, but it works for me). Another thing about the weapons I really enjoyed is the variety. There are like 3-4 different handguns, 2 different sniper rifles, 3-4 shotguns, and 2 Magnums. All have their own strengths and weaknesses, but the coolest part is you can "Tune-Up" your weapons to make them stronger, reload faster, fire faster, and hold more ammo. I have a Striker shotgun that with it's "Exclusive" Tune-Up hold 100 rounds.....now that's a f***ing Shotty! The inclusion of grenades is an awesome thing as well.

The enemy AI is really good also for once. One time, I was holed up in a shack and on the 2nd floor. Next thing I know, I got crazed psychos crawling in the windows upstairs. So naturally I blast them down (they don't die), and then knock over the ladder they were climbing up. Okay, problem solved. Yeah, right. The next thing I know, they have put the ladder back up, and are on their merry way again with knives, axes, pitchforks, and the like to come slaughter me. Enter my "Broken Butterfly" .45 Magnum. Now the problem is solved, lol.

The only thing that I thought would really turn me off was the whole "President's daughter must follow you and be protected through the whole game" thing. Normally, I HATE PROTECTING PEOPLE! But in this game, it was very well done. There are no complex commands, just one button telling her to stay put or follow you. And unlike most stupid people who need protecting, she will duck if you aim in her direction during a firefight (yes, they use guns and crossbows too) and she won't let herself get shot by you, which is a life saver.

They did one thing that I am sure everyone likes. Remember when you were playing RE2 or RE3 and you hadn't saved in a while because you were kicking ass? And then you died and had to do EVERYTHING over again? Not in RE4. They limit that a lot, because if you die, you go back to the room you died in. Saving in this game is mainly for when you have to shut the game off.

Oh, there are also live real-time commands, where you have to quickly press certain buttons that they tell you to in order to avoid things. For example, you're walking along, and a tree is falling. They will tell you to press "L+R" and you can dodge the tree, and if you don't, well, "Tree, meet Leon...Leon, this is Tree". So yes, the gameplay is 100, no, 1000 times better then any RE game...hell, any game I have played in a very long time.

Replayability - Okay, if you have read my reviews before, you have noticed I am very critical on this part and it does ruin a lot of games I review (reference my God of War review), but not RE4. After you beat it, you unlock a new difficulty called "Professional" and three new game modes, plus new costumes, not only for Leon, but also for Ashley, the President's daughter as well (so far, no mini-skirt and thong outfit has been found, but the search continues).

The three game modes are as follows: "Mercenaries", which features old RE favs Hunk and Tofu; "Separate Ways", which features Ada Wong's path of an area where Leon and Ada split up (ho hum, nothing to be to excited about); and the big one that I am going to be starting now that's called "Assignment Ada". It gives you the full story as to why Ada is there. I won't ruin it, since she does fill you in a little during the game, plus a lot more if you pay attention real closely to the chopper she leaves on. Also in the game, you run into one of Leon's old comrades who is also a Federal Agent, but more on him when you play the game.

Overall, this happens to be one of the best games to date. Awesome weapons, AI, and creepy sound make it an excellent game, but the fact that it makes you want to play it again and again, and then play the bonus games, makes this game #1 on my list for Best Games of 2005, and probably #3 on my Best Games of All Time list. Oh yeah, the Premium Edition is nice too. For $50 bucks, you get a metal tin, an RE4 artbook, and a lithograph of Ada. Why are you waiting..........GO BUY IT!