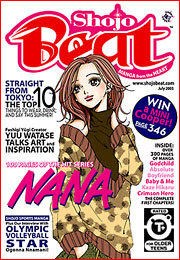 The English translated manga market is continuing to grow within the U.S. Mangas are consistently among the top selling books monthly. To further expand its business, the powerhouse manga publisher Viz Media launched a new monthly manga anthology devoted to women. "Shojo Beat: Manga from the Heart" is exactly as advertised, with 300 pages of manga stories that appeal to women, along with articles and advertisements related to fashion geared toward the 18-35 years old female readership.

The magazine cover looks like a typical fashion magazine like In Style or Cosmopolitan. It is centered on a woman. Above her hand is the name of the magazine, and surrounding her are highlights of what's inside the magazine.

Shojo Beat contains a very promising lineup of mangas. The anchor for this magazine is "Nana" by Ai Yazawa, a best selling and popular manga author in Japan. Nana is a series of short stories about girls, sex, and love. Each chapter of Nana is about a different girl named Nana. This chapter is about a high school girl named Nana Komatsu, who had an affair with a married man, and after graduating is seeking love once again. The characters are beautifully drawn, and wear stylish clothes and hairstyle. The story moves at a very nice pace, with nary a dull moment, and ultimately ends on a nice note. Nana will draw fans from the 18-35 years old female readership.

Next in the lineup is "Absolute Boyfriend" by Yuu Watase of Fushigi Yugi fame. Absolute Boyfriend is about a clumsy high school girl named Riiko Izawa, who is desperate to hook up. Unfortunately for her, she keeps getting rejected by the boys at her school. She lives by herself, but is watched over by a male childhood friend and next-door neighbor. As typical for Ms. Watase, the story alternates between serious moments and light-hearted comedic moments. Absolute Boyfriend will certainly please fans of Yuu Watase.

Following Absolute Boyfriend is an intriguing manga titled, "Godchild," by Kaori Yuki. Obviously and openly drawing inspiration from the story "Alice in Wonderland", Godchild is a macabre story where young girls end up getting their heads chopped off. Prefacing this story is an excellent cultural article, "Mad About Tea Time" by Alvin Lu. This article examines Alice in Wonderland in the context of 19th century England, which Godchild also uses as the time frame.

"Kaze Hikaru" by Taeko Watanabe is a samurai story. The protagonist is a girl looking to avenge the wrongful deaths of her father and brother, by disguising herself as a man and joining a group called the Shinsengumi. This series contain a lot of historical references, and is somewhat out of place in a female oriented magazine.

"Baby & Me" by Marimo Ragawa is a surprisingly heart warming story about a brother who has to take care of his baby brother in place of their recently departed mother. Drawn in a simple style with minimal background details, the story focuses on Takuya's good faith attempts to act responsibly and look after Minoru. Initially resenting the burdens on his shoulder, Takuya comes to a realization and makes peace with his new life. Baby & Me will appeal to family oriented readers.

The last manga in Shoujo Beat is a sports manga titled "Crimson Hero," by Mitsuba Takanashi. A volleyball-loving girl enrolls in a private high school with a renowned volleyball team, only to find that the girls team has been dropped for lack of interest and members. Desperate to form a new team, tomboyish Nobara Sumiyoshi will do anything. The characters are very nicely drawn, with exquisite details in the background. Accompanying this manga is a two-page interview of Ogonna Nnamani, a rising star on Stanford University's volleyball team and a member of the 2004 USA volleyball team in the Olympics.

Shojo Beat v. 1 contains a lot of advertisements. In addition to the usual ads from anime retailers and ads for mangas and anime DVDs, there are ads for Full Metal Alchemist video game and figures, plus an online game ad (Mystic Journey). In addition, opposite the Contents page at the front of the magazine is an ad for a website (memeandmyworld.com), which I have yet to figure out what they're trying to sell (anime lifestyle for the American teenager?). There is a full page Sephora ad on the back cover, and a fashion feature article that reads more like ads than a real article.

The choice of ads accepted by the publisher at Viz Media for Shojo Beat is somewhat interesting. It was mentioned by Central Park Media at an anime convention that their ads for Yaoi manga (homosexual stories) were rejected. Undoubtedly the publisher fears that association with this genre could negatively impact them in some way (advertisers pulling out, and retailers not stocking the magazine). The inclusion of Full Metal Alchemist ads is out of place because this series is an action anime that appeals to boys. Finally, the lack of fashion retailer ads (think clothes and makeup) for a magazine targeting young adult female readership is shocking.

Ultimately, you buy Shojo Beat for the manga stories. The articles and ads are gravy that you can set aside and ignore if you prefer. The stories will keep you hooked and checking the mailbox and retailer shelf for the next issue.
Review Page Hits: 0 today (199 total)
mediahook