Sometimes you just can't judge a game by it's license. There are some gems despite them being from something you wouldn't expect a good game from. So, Shrek Smash 'n' Crash Racing can't be that bad - can it? Oh yes. Yes it can. 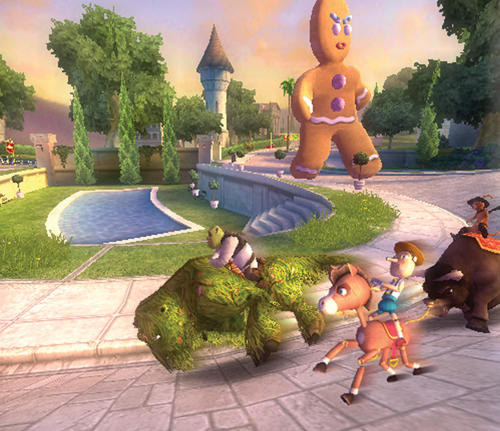 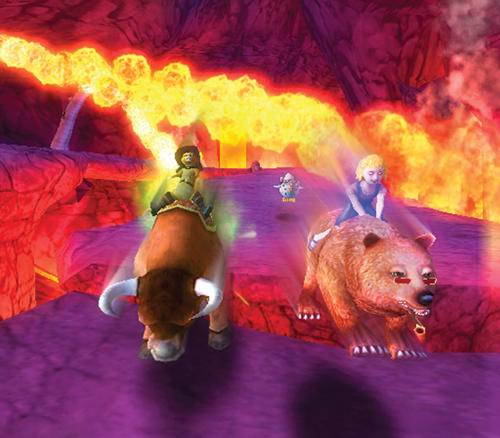 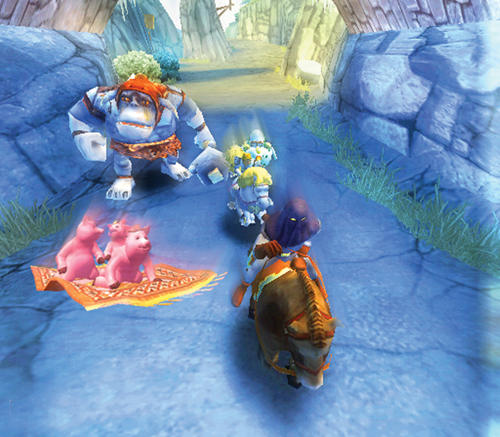 There's not really much going for this game - at all. If it were the same game with different, unique characters, I'm absolutely certain that it wouldn't sell. But because it has the Shrek name stamped on it, I'm sure plenty of copies flew off the shelf. I just wish that some developers would spend more time on games built around movies or television shows. It seems to me that they're always rushing through things and churning out a really poor end product in time to coincide with a cinematic or DVD release. That is sadly the case with Shrek Smash 'n' Crash Racing, a poor Mario Kart clone that doesn't add anything worth noticing to the table - and what it does add, just flat out isn't any good.

Turning on the game, you're greeted with a bunch of clips from the Shrek 2 movie and going further into the game brings you to a nice looking view of the various racing areas. Nothing groundbreaking, but it looks good. There are five modes to choose from - Tournament, Cup Challenge, Quick Race are available for both single and multiplayer, while Time Trial is single player only and Battle is multiplayer only. As I explored these options, the menu music was starting to really get on my nerves, so I headed swiftly into the Tournament mode.

The first thing you can do is select your character. You have Shrek on his Swamp Beast, Donkey on his wife, Dragon, Princess Fiona in her Onion Carriage and Gingy, the Gingerbread man, on his cupcake horse. There are also eight more locked characters, which means there's some incentive to get stuck in - that is if you can stand playing it for long enough to unlock them all!

You are treated, if you want to call it that, to an opening cinematic with Shrek and his friends. A couple minutes, decent graphics and plenty of awful voiceovers later, you hit a load screen. While the game loads up, there are a few things worth mentioning so far. The actors from the movie do not perform the voice work in the game, so the voiceovers are barely tolerable. If you've ever heard some company advertising their product using a pseudo-Mike Myers/Eddie Murphy voice then you'll know what I'm talking about. Another is the graphics, which while not on par with the movie quality, are not too shabby for the PS2. Lastly, these loading times are painfully long - for a quick, three-minute race, they're ridiculous. They're not even fun to look at; you have your basic image of a scroll, with Shrek Smash n' Crash Racing on it, and a twitchy ladybug on the bottom. Finally, we're in the game! You're going to have to figure out the controls by yourself though, because the game doesn't help you with that and I won't either.

Just kidding! I hate having to figure out controls by myself. I'm sure most of you never bother looking at the manual, unless it's absolutely necessary, and neither do I - so it helps when a game explains the basic controls. At least during that long loading screen, or something. Pressing X accelerates while you use the d-pad or left analog stick to steer, Square deals with brake and reverse, while triangle and circle switch to a rear view. Lastly, R1 lets you use your picked-up items from the barrels you crash into. Did I say lastly? Hopefully I'm not alone here when I expect those to be the only controls - but there are three more! Two more, really, as R2 is yet another rear view camera button. L1 allows you to jump and L2 allows you to perform a melee attack, for when you can pick up weapons and launch them at your enemies. This doesn't make sense at first, and quite honestly, the designers could have completely left this feature out. When you're in a close enough proximity of another racer, you can hit them, temporarily incapacitating them, such as at the beginning of the race. Also, there are some characters on the track that will try to stop you from passing and you can knock them out with the melee attack too.

Ladies and gentlemen, start your engines! And your horses. And your carriages. And your mythological creatures. Excited? Well... you shouldn't be.

Do you hear that? Yes, that incredibly annoying 'I would rather listen to nails scratching a blackboard' background music. The music in this game is god-awful; incredibly repetitious, unmemorable tracks definitely don't help score points for a game's sound. I was also unaware that they had electric guitars in Shrek - I guess they must be a new thing in Shrek's time, considering how poor the playing is. To make matters worse, like I have stated previously, there are no voice actors from the movie. Add this to the characters making some inane remark every five seconds and it's just not pleasant. Not only that, but they seem to play absolutely randomly - your character will say something, then something else, then say the first thing again - over and over again. It's almost enough to drive you insane. If you're playing as Shrek, here's an example of what you'll be aggravated by during the game:

Not only are the lines incredibly cheesy, but they're enough to drive you to that mute button on your TV quicker than Donkey can make it off the starting grid.

The graphics aren't too shabby. They're not amazing quality, but come on, what are you expecting from what I'm describing so far? The graphics are about average PS2 quality. The level designs are mediocre at best; there are some more memorable ones and some incredibly bland ones, but none of them really stand out. One thing that really bothered me about some of the level designs is that a lot of objects are in the worst possible spot for you when you're speeding. For example, when you're going full speed there will often be something blocking your way that just pops up out of nowhere, causing you to crash and lose your pace. There's just way too much going on at once and it's hard to focus on where you're going when you need to concentrate on looking somewhere else to make sure you're going in the right direction. How can you not be sure of which direction you should be going? Well that brings me up to my next complaint.

The HUD is incredibly unintuitive. It's hard to screw it up in a racing game, but these developers managed to. Sure, there's your position number in the top left, your time in the top right, the character placings on the left, and the lap number on the bottom right. But there's one thing missing - the mini-map. There's no reason for this game not to have one. There are no buttons to push to bring one up. The other problems I have raised are minor, but this is just ridiculous. Maybe I'm taking it a little too far, but come on - this game needs a mini-map because it's way to easy to get confused on where you're going. The game is too fast paced and when you're crashing into a bunch of stuff, it really kills the experience to not easily regain your stride after flying into a wall.

Now, you might think it strange when I say, despite all these setbacks, the game isn't horrible. It actually gets decent after you play it for a little while and get used to playing with no sound. The game is basically Mario Kart, only really inferior. You have your pick up items, which you pick up from boxes that are on the ground, much like Mario Kart, and you have a bunch of items that are... well... basically much like Mario Kart items. The controls are a little loose and due to the other problems I have written about, this doesn't really help, but once you get used to them it's easy sailing from there.

The first time I played Shrek Smash 'n' Crash Racing I could barely stomach it. After just a little bit of playing time I could feel excruciating pain in the back of my head, like it was going to explode. Everything about the game seemed rehashed and boring. I had to force myself to finish the tournament mode and directly afterwards I fell asleep. But, after I played it again, and again, it grew on me - a little. However, all of the problems that I have mentioned really make this game one that's not worthwhile, especially when there are plenty of other better kart racing games out there. I just hope some of the parents buying the game for their children realize that they're not getting their money's worth, even if it has the Shrek brand slapped on it.
Review Page Hits: 1 today (646 total)
mediahook