While it's lengthy, has plenty of sidequests, good gameplay, and a good plot, Skies of Arcadia: Legends has a few flaws as well. 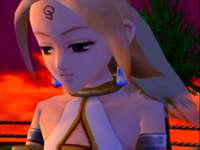 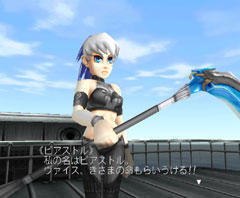 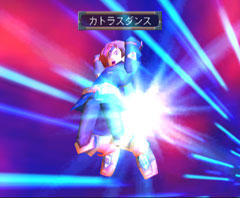 Story: In ancient times, the people of Arcadia were prosperous, living their lives to the fullest. There were four crystals that could control these unbelievably powerful beasts known as "The Four Gigas". One day, the four Gigas went out of control and meteorites rained down from the heavens. The land was left in utter ruins and the people lost hope. Humanity struggled on, eventually forgetting the Legend of Arcadia. Now an almighty empire has taken over the lands that are accessible to them. Ships are all powered by a substance known as a "Moon Crystal".

The story starts off with an airship chase. Eventually, they use a tractor beam to suck in this mysterious girl into their ship -- our adventurous protagonist, Vyse of the Blue Rogues. What would a protagonist be without a trusty sidekick? The perky, optimistic Aika of the Blue Rogues. They find a strangely dressed Fina after annihilating a few guards that stand in their way. Why is she dressed so differently? Where is Fina from? Why does the Imperial Fleet want her so badly? Can Vyse overcome the Imperial fleet? You will have to find that out on your own.

Graphics: A little below average by today's standards, although it's all three dimensional and not bad by any means. This game was made on for Dreamcast originally and when it was ported, the graphics were not improved. The type of design is an anime style of design. The character designs are fun, though it has its share of bad ones. Every ship in this game looks marvelous. However, this game is quite colorful. In fact, it is so colorful, it can cause seizures (beware of this game if you have been known to have them). The special moves look great. Characters make neat facial expressions often, depending on the situation. The graphics could have used an update, but it still doesn't ruin the game....they are just mediocre.

Sound: One of the best parts about "Skies of Arcadia: Legends" is the music. From depressing to strong to upbeat, this game can set the mood. The music is really catchy. The ancient city where Moegi resides has a theme that I'll never forget. It's quite a pleasure when you reach that point in the game. Even the startup music is good. I get goose bumps every time I listen to it.

Gameplay: Ah, the most important part of the game. I will start off with the ground combat. It's not hard to understand. First thing you will notice is the green bar at the top with numbers beside it. The numbers regenerate a little each turn, and each character's special attack requires a certain amount of points to pull off. If the bar reaches full capacity, you can pull off a four person attack that does a lot of damage. You have options to attack, defend, special attack, use item, run, and Focus (this raises your green bar's number). After you choose an option for all your comrades, they act. The character with the highest SPD stat will go first; the same applies to the enemy. Enemies can call allies, run, and do some other bad things to your heroes. You can collect moonberries, which are found all over the islands in the sky. You can also find bounties on characters and get a nice reward for it.

Now, we go on to the focus of the game, the ship battles. The ship battles are broken up into turns --they go, you go, they go, you go, and so on. There are squares that indicate your turn. Above each square is an icon that lets you know how bad your foe's attack will be, and whether or not you need to heal on the next turn. You can fire off a few things, such as turrets, torpedoes, mini-turrets, and the strongest weapon in the game (I won't spoil what it is). Each enemy has special attacks. Some have submachine guns, others use magic on their cannons, while others will try and just fire the classic cannon at you! Each ship you face has a unique look and a unique weapon. They will use that to their advantage. Though you can avoid these special attacks sometimes. You can cast a speed-enabling spell on your ship so you will have a higher chance of not getting hit.

Other than those two types of battles, Legends has a lot to offer. Many sidequests are available. You can also collect all the Moonfish to make Fina's friend and weapon stronger and morph, collect all the bounties, and make discoveries (up to 50, if not more). There is just so much to do in this game that it will easily consume at least forty hours to beat Legends. Unfortunately, the puzzles are simple, and can be figured out within seconds. Eventually, you get your own base, and you can customize it as much as you desire.

Replay Value: Occasionally, it will give you an option to say something and you can only choose one option. Depending on what you say, characters will react differently. This alone adds some replay to this game. There isn't much to the dungeons after you beat them, because once you figured them out, they are even easier. Unless you missed some discoveries, I don't foresee anybody playing this game again unless boredom takes the best of them.

Overall: Twenty-four dollars for a forty-hour game? That sounds like a deal to me. Fun battles, good story, great music. This title will make a great addition to your library of games. Get it now!
Review Page Hits: 0 today (944 total)
mediahook