This has to be the most underrated portable system out there. The only problem is, they only made games for 1 year! But it's good. 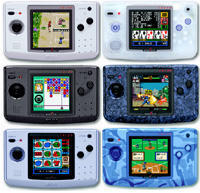 Like I said, this is one of the most underrated portable systems. There's a few reasons for that:

But luckily, there are plenty of places online to find the system and it's games. The best part about the system is a split between it's games and it's features. For games, you get great titles like Metal Slug, King of Fighters, Sonic the Hedgehog, Faselei! and many more, plus sequels. It has been hailed for it's fighting games in particular though. The control is excellent and the games are executed greatly. The response is precise.

Now, you can fairly compare the NGPC to the GBA, but when it came out, the NGPC blew the GBC out of the water. The screen is bigger and clearer, and it's much easier to play in a dimly lit room than with a GBC or GBA. Some complain that it hinders the system because it isn't backlit. But then you wouldn't be able to get 20-30 hours of battery life out of 2 AA batteries. Not to mention, the feel isn't so bad in your hands either. The buttons might seem small, but they work well.

There are other features than those to be used in games. The NGPC also comes with a built in calender and clock, which gives times for all time zones in the world. There is also this cool little horoscope. Totally random, but cool. It has a headphone jack, unlike the GBA SP. Plus, there are some nice accessories. There's a 4-in-1 pack with an AC Adapter, hand cushions (perfect for big hands), rumble feature, and stereo speakers. Plus, the 3-in-1 Worm Light with AC Adapter and Battery Pack.

Now for the games. I'll just point out a few of the better ones.

Sonic the Hedgehog Pocket Adventure: It's like the old Genesis games, but with new flare and animation. There are some mini games for multiplayer and a gallery.

Faselei: import game, but there are still carts of the never released US version to be found on the internet. Very deep RTS RPG. It even has REAL VOICE ACTING and MUSIC.

Cotton: side scrolling shooter, great action. Oh, and it's really hard to find.

Among these, there is a slew of sport games, casino games, and puzzle games like Bust-A-Move and Puyo Pop, and some great console ports like Pacman and Evolution: Eternal Dungeons. Not to mention great import games like Ogre Battle and Rockman: Battle And Fighters. And not to worry, because the NGPC is universal. You can play US, Japanese, Euro, and Asia zoned games on the system. I highly recommend all those interested and all those looking for a great alternative to the GBA, to seriously check the Neo Geo Pocket Color out.
Review Page Hits: 0 today (209 total)
mediahook