The Best Portable Fighter to date! (or at least NGPC date) 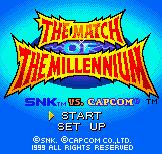 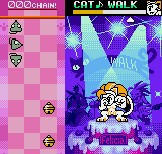 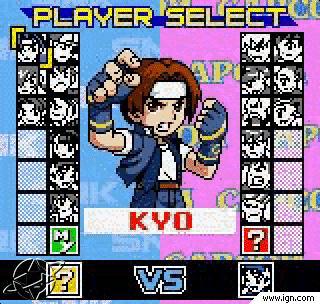 This is the premiere fighting game for portables. This title packs in 26 characters from both Capcom's and SNK's best known series. There are many different modes including Survival, Time Attack, 6 mini-games, and the Tourney. The Tourney is the story mode, which is different for each character. You must thwart the plans of M. Bison and Geese from taking over the world with genetically enhanced versions of Ryu and Lori.

Gameplay - Exceptional. Like I said, there's Survival, Time Attack, the Tourney, and 6 Mini-games which include Catwalk, a sort of Dance Dance Revolution game. Each mini-game has an appearance by other SNK and Capcom characters like Arthur and the Metal Slug team. Combos follow more of a Street Fighter Alpha execution, with 2 and 3 button combos. The combos are pretty simplistic, but that makes them more accessible with the limited buttons. Aside from the basic modes, you can also link to another Neo Geo Pocket Color for head-to-head competition. Also, you can link the game to its Dreamcast cousin for transfer of character profiles and Skill points. To put even more into the game, there's a little Create-A-Fighter mode to boot. You can customize colors and specific moves to execute easier.

Graphics - some of the best on the NGPC. Each character is shrunken down like in Super Puzzle Fighter, and each have a different 3 color tones. Animations are very smooth, especially during special moves. Cut scenes are well drawn as well with attention to detail.

Sound - there is no voice acting, but the music is fun and catchy. Most are tunes from the big brother console versions. Each mini-game's music is specific to the characters' own game.

Control - To a tee. The analog stick works remarkably well. As I said, the combos are also pulled off well with only having 2 buttons to work with. Everything is precise.

The meat of this game is definitely in the game play department. With 26 different characters, 5 game modes including mini-games, and a Create-A-Fighter, this is a definite must buy!
Review Page Hits: 0 today (667 total)
mediahook