Girl Power attacks gamers where it counts: on the Playstation game console. Beware! 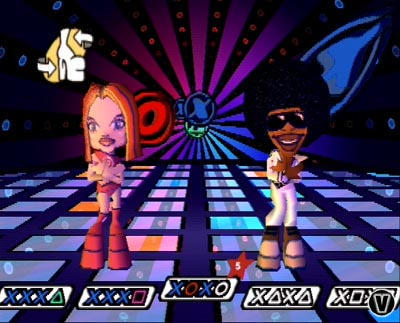 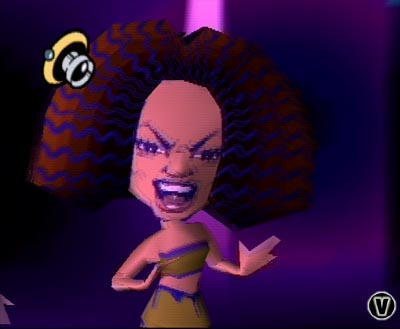 Quickly now, say them with me: Scary, Baby, Posh, Sporty and Ginger. You know who they are, and you've no doubt heard their -ahem- masterful, crafty songs on the radio, and seen their faces plastered over every little sisters wall in America. Yes, the Spice Girls are in full force and now you can manipulate them on your very own Playstation. You can't run, you can't hide. They were bound to get you. Now, most of you are saying to yourselves "hey, why do I need a game with the Spice Girls in it? Haven't I been tortured enough?" Psygnosis apparently feels that gamers have not suffered enough in life, and this is the perfect way of attacking them. Enter the Spice Interactive Music Experience. Remember that fiasco that was the "Marky Mark create-a-video"? Well, welcome to the next level of horror.

Upon turning on this abomination of disc space, you are greeted with a small intro screen with the "girls", all super deformed and supposedly cute, with the title behind them. Once you click past that hard introduction to reality, you face the girls again; this time to pick which one you will control. So let's say you pick Baby. So now you have a little characterized Baby standing in front of you, ideally for skeet shooting, but instead, talking and giving you instructions courtesy of real voice-sampling. From here you have the chance to turn the system off, which is what you should be doing, but if you decide to grit your teeth and continue, you are stuck in the area select level. The level contains the following: Mixing Room, Dance Practice, Dance Record, Television Studio and the Spice Network.

So let's take these in order. First we go into the Mixing Room. This is the area where you can mix selections of various Spice songs. There's an annoying DJ head that floats around the top of the screen who "records" your mixes. He also tells you how to do the mixing. (He should be telling you to turn this off and go outside and enjoy life.) It's all point and click from there. Choose the song, play around with the tune, and then record the mix. The biggest problem with this is that the songs are not presented in their entirety. Only about a total of 30 seconds of each song is present, broken up into 4/4 beats. So you're not really mixing the entire song, just a section of one. Dull.

Next on this tour of horror is the Dance Practice. This section has you learn the dance moves which you will need for the Dance Record area. Each girl has 11 different moves, and there is an instructor to teach you the moves. This level is slightly like Parappa the Rappa, but lacks in the fun, challenge and overall originality. Where Parappa had you battling against someone, this one is just to follow the instructor so you can unlock the moves. Ugh.

Now we get thrown into the Dance Record section. This is where you use the moves that you learned in the practice session. Dance moves are done by punching in sequences in four to make a move. Keep doing this for all the girls if you want to make them do different dances. If you want them to all move in synch, just hit a button, and they will all be dancing with the same moves. You can play back your progress after each rotation, to see what moves they will be doing.
Well, now that the dancing has been chosen, and the music has been mixed, now it's time to go to the Television Studio. With the hit of a button, everything you did up to this point is put together, and the "girls" put on an at-home-concert just for you!! (Oh yea!). Different R and L buttons control the camera angles, so you can feel like a real cameraman filming the Spice Girls. That's it. You're done. Hope you have enjoyed your Interactive Experience.

The last section, the Spice Network is nothing but video footage of some poor interviewer being forced to ask questions like: "What does Nelson Mandela think of you?" Who the hell cares? Like that makes them even better because Mandela thinks they are good? He's never heard of them, most likely. At least the interviewer decides to keep his face off the camera and screen. This guy would never live down being on a game like this. He probably already has a price on his head for doing this.

So what does this mean? Well, first of all, don't get this game. It's bad. I mean not just bad, but really bad. If you have a sister and she wants you to get this game, punish her severely. If somebody gets this game for you as a joke, don't be their friend anymore. Do not, under any circumstance, get this game. It lacks any morsel of being "Interactive", has only a scant few minutes of "Music" and should really not be called an "Experience". Maybe "Torture" would be more correct. This game has no replay value, as it took all of 15 minutes to go completely through this game, and it just makes you feel sick inside. Don't buy, don't rent, don't even look in its direction. The Spice Girls are taking over America, and they just hit us where it counts....And it's not a pretty sight.