The DS version of Revenge of the Sith is nearly identical to the GBA version. Some new features would be the space fights with Clone starships or just going through a trench on your way to the Jedi Temple. 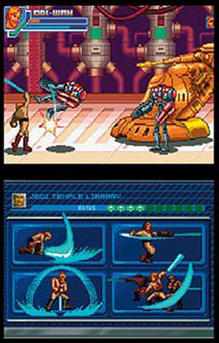 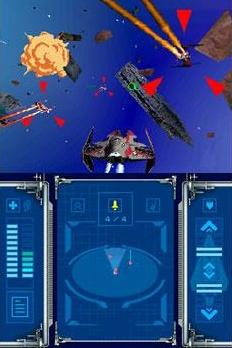 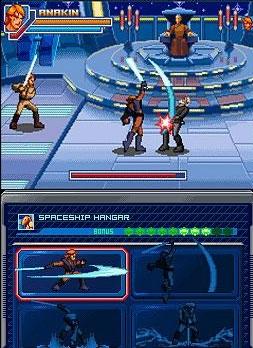 While each character does offer enough variety from each other to feel like a different experience, each of their levels are pretty much the same. Obi-Wan Kenobi is in Utapau making his way towards General Grievous and killing droids. Meanwhile, Anakin is involved in a similar mission, as he has been given the order to spy on the Chancellor. While the backdrops and stories are obviously different, the enemies are structured virtually the same way, even with similar boss battles after each area. Aside from a few different characters, there are no differences, and the same fights occur.

The obvious issue with Revenge of the Sith on the DS is that Ubisoft merely ported their GBA version of the game under the same name. The only differences are a few minor inclusions, such as a few touch screen menus and better sound quality, which is mostly pulled from the movie. You do get the feel of being inside a movie despite its graphical issues, its GBA-style graphics.

The 3D star fighting missions are bland and most of the time are the same two maps used over and over with a slight difference in the amount of enemies. This decreases the appeal of the game. The rest of the gameplay is pulled off well, for the most part. A lot of buttons are used to better initiate the attacks in the game.The exclusive additions for the DS version make the experience somewhat fulfilling, despite its low-end appearance.

For the most part, Episode III's action takes place on 2D sidescrolling maps, which makes the game a decent side-scrolling title. Thanks to a good console-style selection of buttons, the DS allows people to pull off a lot of stylish lightsaber and Force moves, even if they feel somewhat repetitive throughout the game.
Review Page Hits: 0 today (130 total)
mediahook