THE STORY IN "STAR WARS: KNIGHTS OF THE OLD REPUBLIC" IS BETTER THAN EPISODES ONE AND TWO. 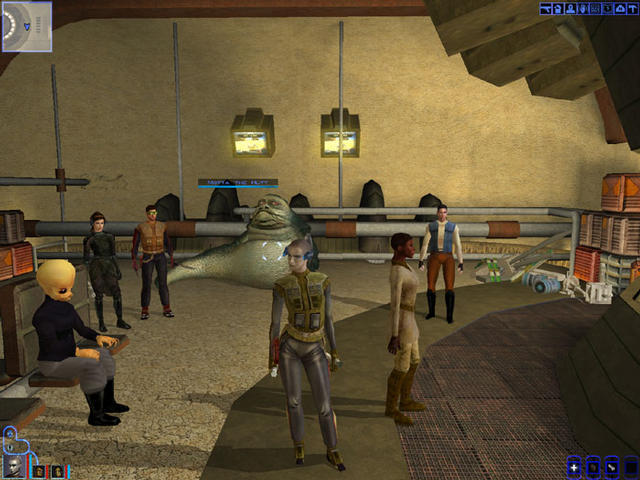 After the X-Wing/Tie Fighter series and the very first Jedi Knight first-person shooter, there were some slow years for Star Wars fans in the video game industry. For a short period, most of the Star Wars games after those two games were subpar attempts, but finally, Star Wars fans are getting their due. With the GameCube came the Rogue Leader series, then the Jedi Knight sequel was published, and now, Star Wars fans have their very own role-playing game. Developed by Bioware, the famous company behind Baldur's Gate and other RPG classics, Knights of the Old Republic (or KOTOR as it's written in internet circles) is without a doubt the essential Star Wars experience and one of the best PC RPGs in the last few years.

If you've ever played a Dungeons & Dragons computer game which stays true to the original rules, you'll have no problem understanding KOTOR's system. KOTOR uses the famous D&D ruleset and while it can be a little awkward with some concepts, in general, it runs smoothly with the Star Wars universe. The game does come with a moderate-sized instruction book that explains all the gameplay concepts, but gamers familiar with the D&D universe will probably suffer less frustration. Maybe the most universally frustrating gameplay aspect is the interface and mouse/keyboard controls. KOTOR was simultaneously designed for the Xbox and PC and it looks like most of the game's interface was designed with the Xbox in mind. This reviewer played both versions of KOTOR and found the Xbox version to have a more natural feel. The PC version isn't entirely awkward and it's a much better port than other console to PC interfaces, but it will take some time to get used to.

It's easy to forget some of these annoyances, though, because the story in KOTOR is first class. It's easily one of the best stories I've ever played through in an RPG. While the game take place thousands of years before the events in the famous Star Wars films, many of the famous Star Wars fixtures are included. Your hero is allowed to explore Tatooine (Luke Skywalker's planet), Kashyyyk (Chewbacca's planet), and even fly his own smuggler's version of the Millenium Falcon. The fact that your hero's sidekicks who join the adventure have their own stories and sub-quests makes the game feel even more alive. Also, during conversations with henchmen and NPCs, some dialogue choices or actions will sway your Jedi hero to the dark or light side of the force. If, by the end of the game, your hero has gone forever to the dark side, you will play a different ending than if you were a good Jedi. All of these factors make for a thoroughly enjoyable RPG, enough so that I replayed the game a few weeks after completing it he first time and decided to pursue the dark side of the force because my first hero had been a good Jedi in the mold of Obi-Wan or Luke Skywalker.

Gameplay in KOTOR is similar to Final Fantasy's famous turn-based combat system. When combat begins, the game freezes and you are prompted to decide your actions which will be played out in turns. So if you have a limited attention span and only enjoy the action combat in a game like Morrowind or Gothic or the hack and slash gameplay in Diablo and Dungeon Siege, KOTOR may not be the game for you. Bioware did an excellent job in giving animation to these turn-based actions. Combat is strategically planned, but it plays out like a movie sequence.

Maybe one of the few complaints I have about KOTOR is that, by the end of the game, sometimes it becomes too easy if you decide to choose a player class with warrior attributes. In the beginning of the game, you are allowed to choose 3 classes: scoundrel, soldier or scout. When your character is admitted into the Jedi Academy, you will also be given more class choices. Make sure you're informed on how these classes affect future actions because some allow more or less skills, force powers and feats. If you decide to go with the buff classes or certain force powers that are more suitable for fighting, you may find yourself bored sometimes near the end of the game as you easily mow down enemy forces.

One perk with most RPGs (and PC games in general) is that there is usually a large mod community of custom content which can make the original game twice as enjoyable. I have sad news to report, though. LucasArts has decided not to support any mod community and the game does not ship with a toolset. However, there are a few gifted programmers in the Star Wars community who have come up with minor mods and the links are provided in this review. The best mod is probably the Padawan Mod which allows a gamer to immediately start the game as a Jedi and skip the non-force classes. There is a small design team trying to design new worlds, but the prospects of a large mod community developing are bleak.

If you're a die-hard Star Wars fan who finds yourself rewatching the movies every once in a while, KOTOR is your dream game. But even if you're not a Star Wars fan, KOTOR is a top notch RPG that will pull any gamer into the story. "The Phantom Menace" and "Attack of the Clones" may have been disappointments, but never fear because "Knights of the Old Republic" is here to save the day and provide you with the riveting Star Wars story you remember from the first three films.