This IS science-fiction. Truly a classic, even if edited. 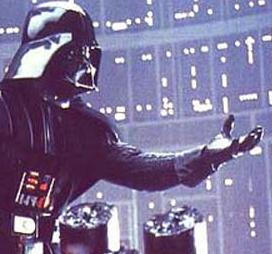 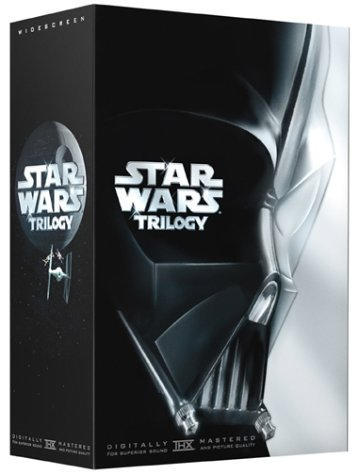 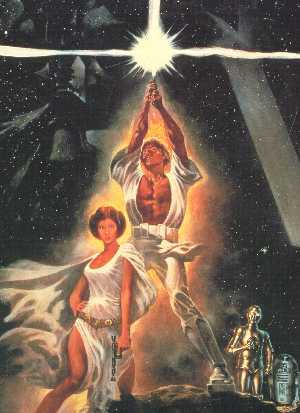 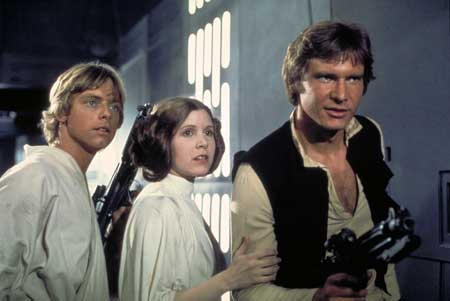 Star Wars was a instant hit with the fans and continues to be a favorite of each generation to come along. It had awesome special effects at the time (creator George Lucas has updated this however, which ticked off some fans), it had story, characters, villains. You name it, it's got it, so let me break down each movie and rate them.

Star Wars: Episode IV - A New Hope (A+) -- The story begins with a Rebellion (good guys) ship being chased by an Imperial (bad guys) Star Destroyer. After Princess Leia (Carrie Fisher), the princess of the rebellion and a strong-willed woman, puts some important blueprints into a feisty little droid (robot) named R2-D2, R2 and fellow droid C-3PO (a concerned droid that worries too much) are sent to the barren planet of Tattooine. After separating, they eventually wind up being caught by the Jawas, a tribe of hooded scavengers. Following a brief reunion, the two droids are bought by Owen Larrs and his nephew Luke Skywalker (Mark Hamill, the protagonist that is the focus of the story; a head-strong young man with the piloting skills of an ace) to help around their farm. After their family is attacked, Luke makes an important decision, thanks to the prodding of Obi-Wan Kenobi (Alec Guinness), an old Jedi Knight.

The story also features Han Solo (Harrison Ford), a smuggler-for-hire that has no regard for anything but money, and his loyal sidekick, Chewbacca (Peter Mayhew). The main villain, Darth Vader (voiced by James Earl Jones) is a Dark Jedi with a heart of black that's bent on doing his emperor's will bidding. He comes into play early in the trilogy and has a major role throughout the films. The special effects in "A New Hope" are especially great. This was groundbreaking at the time. Lucas has added some bonus footage however and edited the old effects with CGI, which angered some of the fans. Nevertheless, the story in this one is really good, and any science fiction fan should check it out. Perfect score.

Star Wars: Episode V - The Empire Strikes Back (A+) -- This movie continues the story of Luke, on an ice planet named Hoth. It is a story of revelation, and has a few twists that will boggle the mind. The Empire is still looking for the Rebels and sends spy droids to dozens of planets. After one succeeds in locating the Rebels, Darth Vader senses "this is the one" and plans his attack. The special effects are great. Not as much was added to this movie as "A New Hope", but it still has a few bonus scenes, which are a plus in my book. Being my favorite of the Trilogy, I think this one should be watched directly after Episode IV. The ending leads up to Episode VI.

Star Wars: Episode VI - The Return of the Jedi (A) -- This episode picks up the story where the "The Empire Strikes Back" left off. Lando Calrissian (Billy Dee Williams, the man who turned on Han Solo, but eventually rescued Leia and Chewie from Imperial hands) and Chewbacca are searching for their friend, Han Solo, who was frozen and given to the crime lord, "Jabba the Hutt", thanks to the skills of Boba Fett, a fearless bounty hunter. The Death Star is being reconstructed and Darth Vader has come to speed things up. Will Leia, Chewbacca, and Lando rescue their friend? This is actually not as good as the other two movies, which are hard to live up to. I especially like the space battle at the end. It's a very exciting film just like the other two were. A few minor additions were made to this, notably to the end (geeks, you know what I'm talking about). Good movie with a decent ending to the trilogy.

Bonus Material -- includes documentaries, "the making of", the works. Sounds good to me.

Overall, I enjoyed the Trilogy more than any other film(s) I've ever seen before. This MADE science-fiction.