The start of a grand legacy... 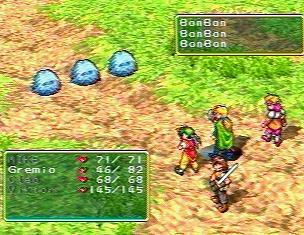 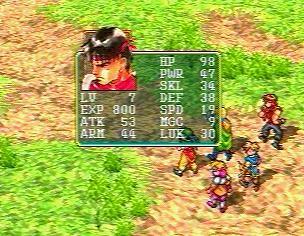 Suikoden: the name rings with a sense of quality for many role-playing game fans out there. The first Suikoden was the start of a grand line of RPGs for the Playstation and Playstation 2, as well as a small run on the Saturn. There is so much to love about this great RPG.

We'll start off with Suikoden's graphics. On the graphical front, it has a quasi-2D system. For its time on the Playstation, its graphics were top of the line and were far superior to that of SNES games. The graphics aren't bland like Super Nintendo 2D, but rather they pop out and show more depth, which is useful to show off the game's great environments and spacious levels that you get thrown into along your journey, with the over 108 characters and villians. The Playstation shows off its power with the vibrant backdrops you'll be thrown into, everything from snow-covered mountains, to grand palaces, to dark damp sewers. You'll find yourself just wanting to push on the story just to see exactly where your adventure will take you. Not many RPGs, even the newer generation of games, can say that they kept the players enthralled the way Suikoden does.

Which brings us to the story. The story, without giving too much away, centers around a young nobleman's son who witnesses a great injustice in his native empire and must rise up, with the help of friends and allies, to create a force of thousands to counter the evil empire. The story is full of anger, betrayal, sorrow, love, and many other elements that serve to push the story forward to make it a memorable RPG experience. If you enjoy a grand story that has twists and turns, you'll love Suikoden. Each of the main characters and many of the "lesser" character's motivations are fleshed out and you can see that the war that brews between Emperor Barbarossa and the Liberation army is not as clear cut as many good versus evil stories that many RPG players have seen nearly a thousand times over. The villians are not outright evil, there is a large grey area and you may even find yourself sympathysing with these so called "enemies".

The soundtrack is memorable, the music touching, and I couldn't tell you how many times I found myself humming tunes from the game in my head. Suikoden's soundtrack is so good that it warranted musical scores and CDs to be released with just its music. Tracks such as "Theme of a Moonlit Night" touch you and make you want to sit and listen for hours. The soundtrack makes the worst battles seem epic and make them become a truly pulse pounding and riveting scene. You'll find yourself almost brought to tears by a simple song, or finding yourself wanting to thrash that no good boss for trouncing your party last round, the soundtrack is JUST THAT GOOD.

Replay value is one area that may be a given in ANY Suikoden game, this one above all others. With the ability to recruit 108 fighters, shop owners, etc. to your cause, you spend hours upon hours adding to your army and searching for the perfect recruit. It's easy to miss characters, and this serves both to help the game and hurt it. Sometimes characters are VERY easy to skip over and you may spend hours going back to find a character or two you may have missed. Overall, I think the 108 character group recruitment adds to the game rather than taking away from it.


Well, other than the story and the graphics, Suikoden's gameplay sinks all other RPGs. Not only does it offer powerful battles against a variety of creatures, but it's done without getting bogged down and tired of doing the same old thing battle after battle. The game manages to expand on the traditional turn-based combat engine and makes everything flow more smoothly than the whole "your turn-then-my turn" problem. Overall the gameplay shines like none other, not many RPGs even bother to break up the monotony with other gameplay types, and those who do may or may not pull it off nearly as well as Suikoden.

The game mixes in a variety of non-traditional RPG elements such as army versus army battles, one-on-one dual battles and the new six-person battle party. There are no magic points in this game however, but you are given counters on your magic runes that allow you to use a specific amount of spells in any given battle. The gameplay is diverse and unique, not something you see in every RPG nowadays.

Suikoden is worth a look, moreso today than ever due to the rush of subpar and mediocre RPGs in todays market. It's a game series that still ,even today with all the newer graphics and polish, can keep me playing for hours on end. The music, the characters, the gameplay, everything.

This game is amazing and I recommend it to anyone who is searching for an old-school RPG to wet your appetite.
Review Page Hits: 0 today (521 total)
mediahook