Tell All Your Friends (Taking Back Sunday)

TBS mixes genres better than any other emo-core band has ever done. 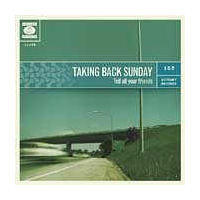 Upon first listen, most will write Taking Back Sunday off as another lame hardcore/pop-punk rip off act. Critics have lamented about them with comments such as lacking any originality and nowhere near being creative. To some extent, those criticisms are true. Many bands have attempted to mix up genres by adding emotional hardcore screams to an overall pop-punk sound, but no one has been able to capture it quite like TBS has. Their end result is nothing shy of a perfect blend of punk, rock, emo, and hardcore, overflowing with passion and emotion. Now, before you write Taking Back Sunday off as another Victory (Thursday) rip off band, read the remainder of this review.

What makes TBS so special is the dual vocal attacks; by attack I suggest that as a listener, you will be frequently surprised with the alternating vocal harmonies that lay here, or the sound of a shrill scream midway through a chorus. While dueling vocalists is nothing new, as Jimmy Eat World tried it over five years ago, but they failed to capture the listener much like TBS manages to do. Imagine Saves the Day-style vocals crossed with Thursday-inspired screams. Vocalist Adam Lazzara proves he can belt out hardcore anthems with the best of them on tracks like "Cute Without the 'E' (Cut From the Team)" and "You're So Last Summer", two of the top tracks on this record. The vocals on "Ghost Man on Third" are absolutely phenomenal.

On par with the incredibly impressive vocals is of course the rest of the band. Compared to The Movielife (which guitarist Ed Reyes was an original member of), musically the band is on a much higher level. As influential to the emo-core genre as The Movielife may be, TBS seems to have cultivated the whole punk/emo/core/rock mixture much better. The songs are upbeat and danceable, and the music is much more rocking, making the album far more enjoyable to listen to. The drumming is also non-standard and the riffs will have you rocking out on air guitar in no time at all. TBS also have a great sense of musicality, adding strings "Great Romances of the 20th Century" as well the excellent piano solo on "The Blue Channel".

Lyrically, Taking Back Sunday ranks up there with some of the best emo and hardcore bands in recent memory. "You Know How I Do" deals with friends and drug abuse ("We won't stand for hazy eyes anymore. He's smoked out in the back of the van, says he's held up with holding on...."), or dealing with ex-girlfriends like "Bike Scene" ("There are certain things I promised (cross my heart and hope to...) never to let you know. Like: Your silly way of keeping me on the edge of my seat"). "There's No 'I' in Team" also deals with the pains of heartbreak ("I won't lie, it keeps me up till ungodly hours at night. But I can't regret, so just forget it. I started something I couldn't finish, and if we go down then we go down together. Best friends means I pulled the trigger, best friends means you get what you deserve.") However, one of the greatest lines in recent history lies in "You're So Last Summer", ("You could slit my throat and with my one last gasping breath I'd apologize for bleeding on your shirt.").

"Tell All Your Friends" succeeds as a whole. Each track is different, yet consistent enough to find a place on this record. This record will have you and a buddy singing along and rocking out like you are in an emo-core band instantly. As soon as you listen to a song, you won't be changing CDs. It's one of those rare occurrences where you can't just listen to one track; you just HAVE to listen to the entire album. In a way it's something like that. Yeah...I'll stop now.

By the way, their live show is just as good as the album.