A MUST HAVE for any die-hard skateboarder. More realistic than Tony Hawk's Pro Skater. But watch out, casual gamer. This one can be rough for some... 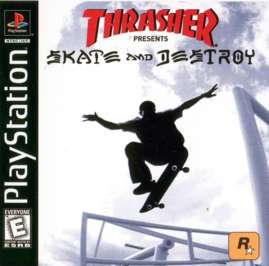 Thrasher: Skate and Destroy is a skateboarding sim. It's style and gameplay however, are completely unlike that found in "Tony Hawk's Pro Skater" series.

In this game you get a choice of 6 different characters that are not yet pro skaters. At the beginning they are not even known outside of their respective hometowns. The object of the game is to get recognized and sponsored. You start out in the first level titled "Hometown: Industrial". Use your somewhat limited arsenal of tricks to beat the high score of 5000 and outrun the cop that starts chasing you by getting to an exit or getting a certain distance away from him.

After the first level you learn the "wallride" which you can then use in the next level. The game conitinues like this until the end, in the sense that each time you beat a level you unlock anywhere from 1-3 tricks. All "areas" have three "levels" within them, with the exception of the first, which has only one. On the third and final level of each area you must win a competition in which different rules apply than those seen in the first two levels of the area. In the competition mode, you lose 500 points for not landing a trick, and there is no one to chase you out at the end of the level. Also, upon successful completion of the competition level, you get the choice of a sponsor. When you choose a sponsor, your character will then be able to wear/use the corresponding product (decks, shoes, shirts). When this mode is beaten you will unlock the special trick for that character.

In the expert difficulty mode, tricks are harder to land as you have to set up earlier for tricks, cannot pop out of grinds as high, and you must press square to land all tricks. Once you have beaten expert mode, you must go back through the levels and beat the high scores in each. After beating an area, you will be allowed to view the replay and take a "snapshot" at any point. This photo will then be pasted on a Thrasher magazine cover. Get all 5 covers and you become skater of the year.

This is a game I am very fond of for one reason: it is the best skateboarding sim out there, hands down. For people who don't skateboard, I imagine this game wouldn't be much fun. In fact, I KNOW it wouldn't (I've tried to get people to play it). The learning curve is just ridiculously steep for the average user and the game isn't all too pretty to look at. But if you're tired of Tony Hawk, and are looking for something a little more realistic, even at the expense of the Tony Hawk polish, you should consider Thrasher. A must play for the hardcore skater fan!
Review Page Hits: 0 today (38 total)
mediahook