Not as heavy as Core or Purple, Tiny Music is a record that all modern rock fans may not love, but can definitely appreciate. 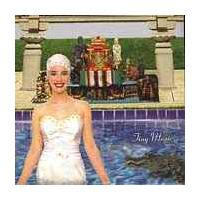 While Stone Temple Pilots' debut album "Core" did nothing more than get them some recognition, it was their second effort, "Purple", which got them fame. In a valiant attempt to prove they were more than one-album wonders, they released their third record, "Tiny Music...Songs from the Vatican Gift Shop".

Looking back on it, this album was actually pretty influential to me. Back in 1996, when Buzz Clips existed and MTV played music videos, STP scored two video hits off this album. The first being "Big Bang Baby". It features, cheesy 80's-esque effects, as well as being shot with a white background, instantly giving it away that it was a music video. As well as video success, the song received heavy rotation on the radio, and is definitely one of the top tracks on Tiny Music. The second video off the album was "Trippin' on a Hole in a Paper Heart". I remember vaguely that video had a home-made feel to it and included vocalist (and heroin addict) Scott Weiland eating a turkey sandwich. None the less, it is by far the highlight of the record. It's upbeat tempo, catchy melodies, and excellent guitar solo make it all the better.

Other highlights include the fabulous intro, "Press Play", as well as "Pop's Love Suicide", a song that sets an overall tone for the album. Like most of the other tracks, its full of plenty of Weiland's scratchy vocals, layers of raunchy guitar tracks, and solid drum beats. "Tumble in the Rough" was also a minor hit for the band, which is an excellent track. Perhaps the biggest hit lies on the Beatles-sounding "Lady Picture Show". It's laid back tempo and catchy chorus made it an instant classic. One of my favorite, non-single/radio tracks is "Art School Girl". It could be because it's a song I could relate to, or perhaps the instantly catchy guitar riff. "Ride the Cliché" also features some seemingly powerful guitar riffs, as well as an excellent solo. The rest of the record is mostly of filler quality, but that's how many songs at most, 4?

Overall, "Tiny Music" is an excellent follow-up to the monster that was "Purple". However, I feel as if STP held something back, it seems conservative, and much lighter than their previous efforts. It lacks the heavy pounding of "Core" and the instantly catchy riffs of "Purple". Regardless, "Tiny Music...Songs From the Vatican Gift Shop" is a record no STP fan should be without.
Review Page Hits: 0 today (86 total)
mediahook