Tomb Raider on the DS! Wait...I'm not that excited. 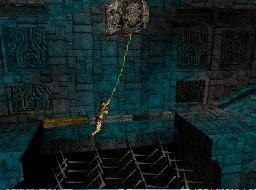 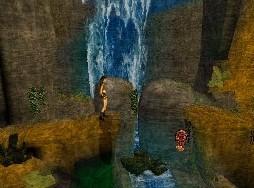 Five months later and Eidos gives us Tomb Raider Legend on the DS. The story is the same from the console versions (just cut down a little). Lara Croft is investigating her own history because she is interested in the disappearance of her mother. During her quest she is taken to a few exotic locations scattered all over the world. This is the story...

The DS version has been delayed when compared to the other releases and you would expect the delay to produce something substantial. However, that is not the case, not even close to the case. The DS version of Legend starts out with a cinematic (one of the few in the game) and you immediately notice that some of the textures and displays are running together. They don't stop in the cinematic. When the game starts it only worsens. Often times you can't distinguish which ledges you can grab or what is actually in the background. Not only that but the grapple feature is horrible! Many times it was telling me to press "X" when I couldn't even see where the grapple was. In one instance after about five minutes I gave up on even finding the grapple spot!

Shooting is another annoyance because they have implemented some kind of shooting mini-game with each enemy (human enemies anyway). When you lock on to an enemy and hit the fire button the bottom screen turns into a type of mini game. The enemy simply slides back and forth and you touch him to fire a shot that makes contact. It is actually extremely easy to shoot them this way which took away from the overall gameplay.

The graphics are not the best and that is due to their attempt at a 2-D/3-D mix. Their fence sitting doesn't add emphasis to gameplay or graphics. It really hinders the overall feel of the game. Often times you find the environments very pixilated and ugly. The ledge hoping was pretty well done (when you can tell what is actually a ledge) but a lot of moves were cut out from the console versions. You will find yourself jumping and jumping...and jumping with little variation except a little swinging here and there. I really expected better execution and implementation seeing that the game took such a long time to be released after the other versions but it just fell short.

Sound is another disappointment. It wasn't the music nor the sound effects themselves that I was unhappy with but the overall loudness of projection. I can usually play DS games on my DS Lite with the TV on but I had to mute the TV to play this title. It was just too low! The shooting sounds and music were actually pretty good when I could hear them. The game had the typical Tomb Raider-type music which wasn't a huge surprise but at least it was done pretty well.

There was one positive with the game and that was the length. If you have the patience to play the game then you have a fairly long action game which tops out at around 8 hours of gameplay. Though the level designs are cut down and rough they are vastly different in each of the nine levels. I also found each level to be decently in-depth and long. There wasn't much room for secrets or for hidden items like I am used to in other games due to a peculiar linear set-up. I have played quite a few Tomb Raider games (on various handhelds) and they all seemed to have more open-ended levels and various ways to reach goals. This particular game lacked those familiar raider qualities.

Another failed version of Tomb Raider. It wasn't because the game lacked the ability to be great but it lacked good implementation. The game belongs in a tomb and isn't lively enough to raid anything. The overall presentation was poor and that is unacceptable noting the time we had to wait for this title to hit the DS. The single player is quite dull and while the N-gage version of Tomb Raider had multiplayer this version does not support it. There are a few ways to convert a decent console game to a handheld system and Eidos chose a different path, a path as clear as the textures in the game they created.
Review Page Hits: 0 today (544 total)
mediahook