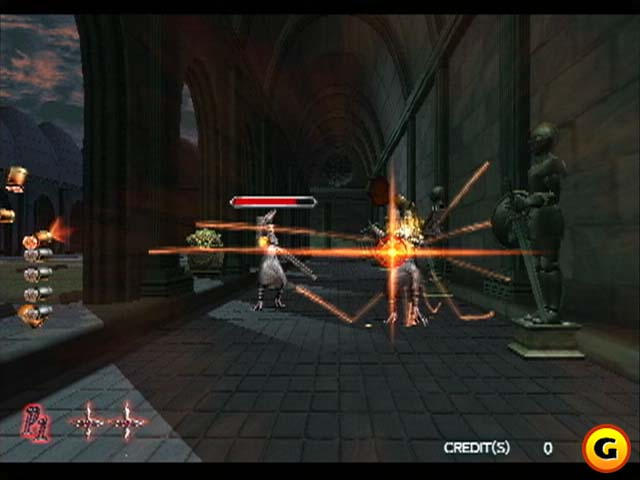 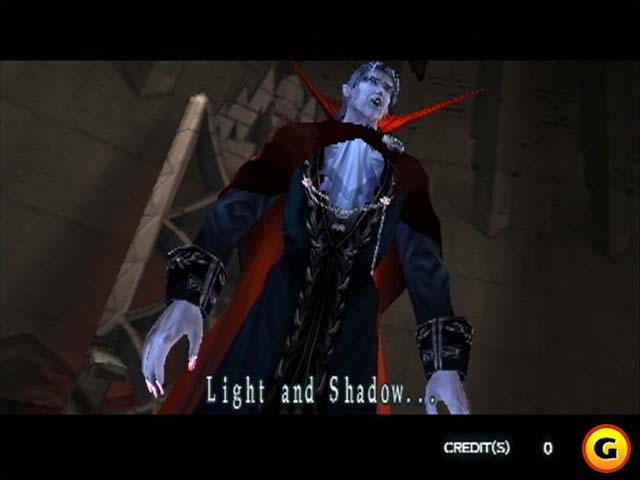 First, let me say that it is hard to believe Vampire Night was released in 2001. It is probably the best game I have played on the PS2. It is basically like playing an arcade game on your home console. The ONLY thing missing is the vibration function on the gun.

When I first started playing the game, my jaw hit the floor as I was amazed at the perfect calibration on the GunCon 2. The graphics blew me away, but more importantly, I was amazed at the overall feel of the game. Granted, I am biased toward goth genres, as my handle suggests, but even if you have no interest in the occult, shooting vampires is fun!

(the voice acting is more stale than a 4-year-old can of weak sauce) and the only real feature of the game is the Arcade mode. Yeah, the Training mode exists, but it isn't half as fun. And the Special mode is the exact same as Arcade with some absurd mini-games thrown in, like "shoot the tree to collect nuts for the villager whilst blasting vamps". (?!)

But really, the game engine is solid, and that is all that matters. I like that, right before a boss battle starts, the game pauses and highlights the enemy's weak spots. Also, you get bonuses for saving villagers from becoming vampires, but I am not good at that. Usually, I only accomplish that by accident.

The game has six stages for the arcade mode, and the special mode repeats the same six stages, but you can use items in the special mode. The items are unlocked in the game's training section by beating the training tests within a set time limit. But again, the main feature of the game is the arcade mode, which takes about two and a half hours to beat. The game is pretty simple: you shoot vampires in different areas, and try to free villagers that are being attacked by vampire parasites, and prevent them from becoming vampires. Fortunately, the game has good replay value.

Vampire Night can be bought at EB Games for $20.24 shipped plus tax if you use the "aff15" coupon code and edge card discount and the coupon code "saver" for free shipping on used games. See my link for the EB Games site. That price was for a used copy sans GunCon. Good luck finding a new copy.