Violette Summer, a woman scorned, a sharp knife, and evil men. As video games so often remind us, in WWII the Germans never stood a chance! This game just painfully reminds us! 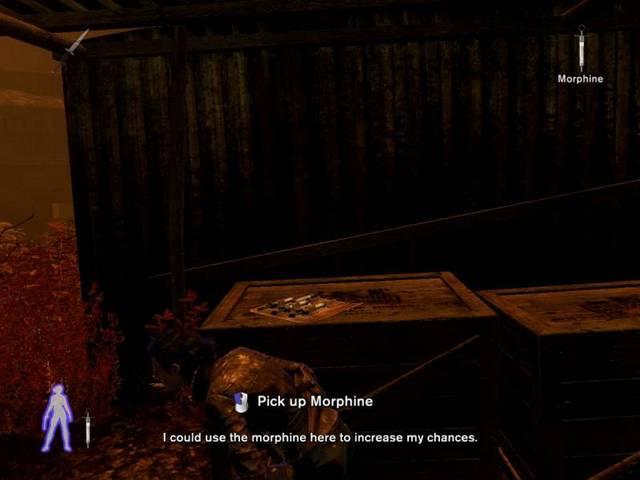 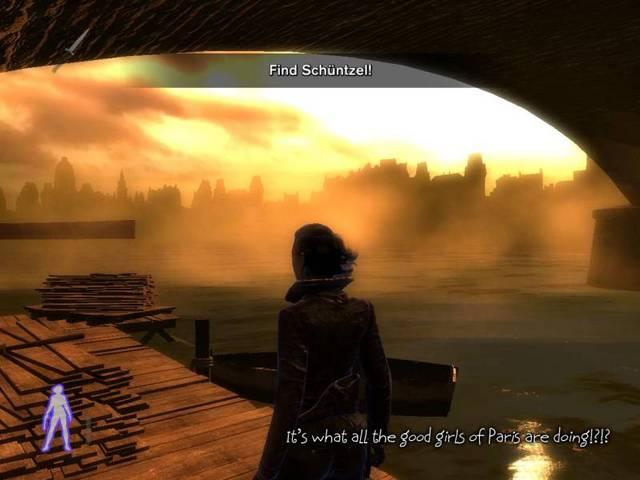 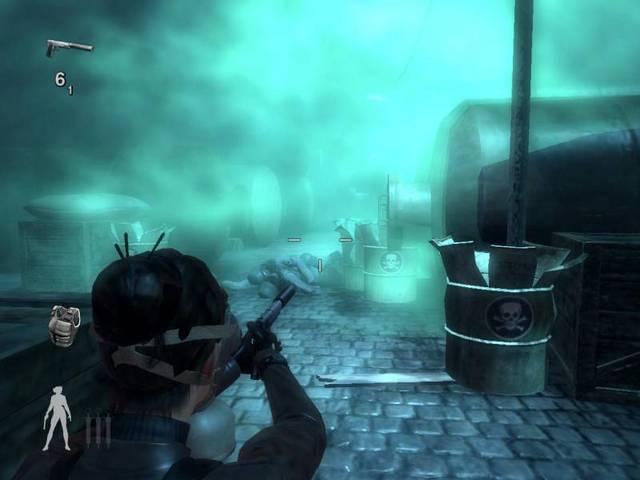 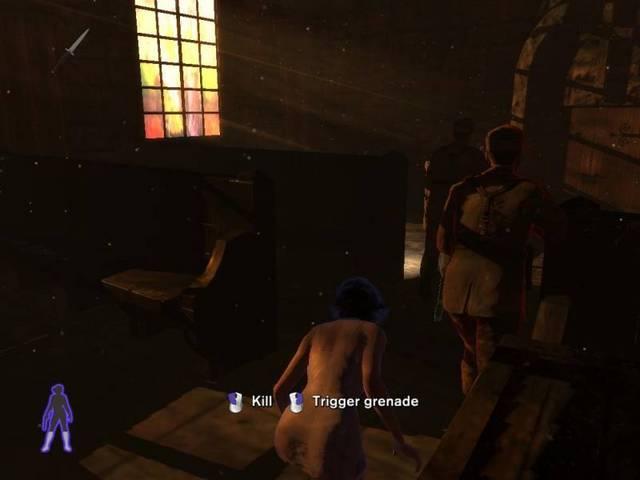 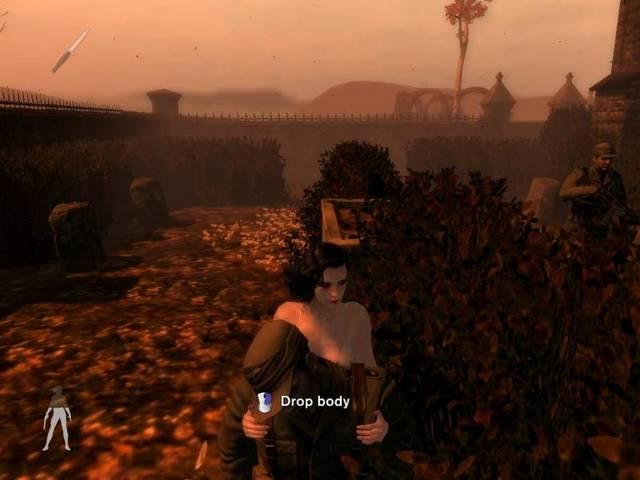 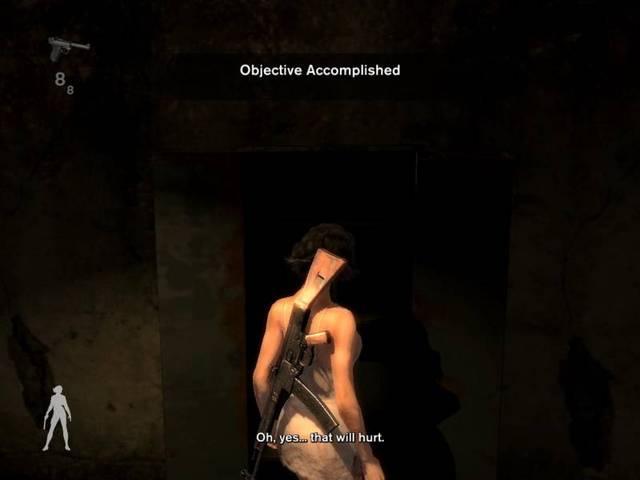 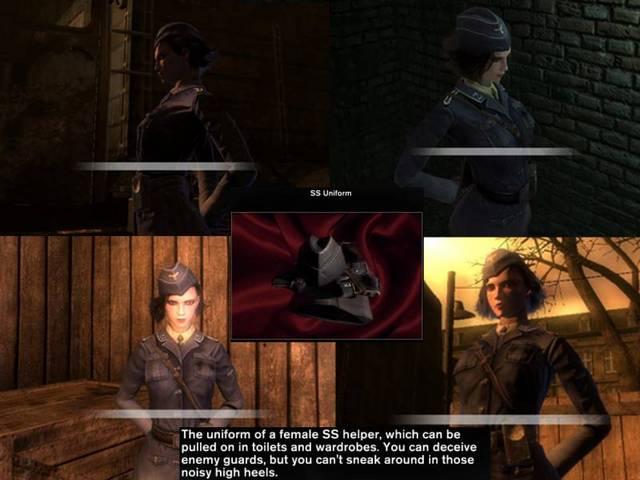 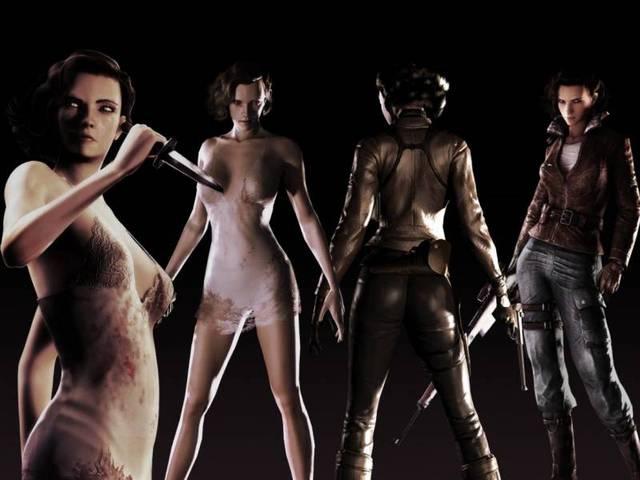 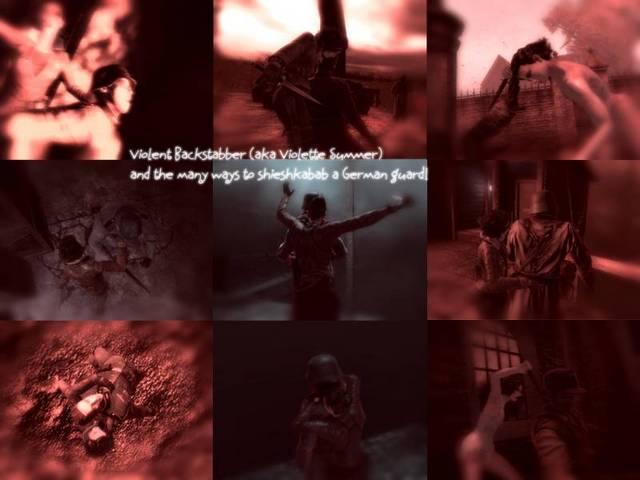 The introduction starts with a story, one the draws you in, and brings you deep into the spy world of World War 2. Fantastic! OK just for me, will you stop playing the game now! Please put it back in the box and never set your eyes on it ever again. However if you are curious, and don't take my advice, boy, are you in for a woeful game.

A game of constant reloads, nasty controls, short comings, and finally ending up wishing you were playing splinter cell. This game if you haven't guessed by now is a take on so many others. You are a British Female (Lara croft) secret agent (Sam Fisher) called Violent Backstabber, erm sorry, that's Violette Summer. You are a British spy in WWII (Commandos 2, or take your pick of any number of games) in an intense stealth action game with surreal visuals (Assassins Creed).

The story starts with you in a hospital bed, reliving your past (Assassins Creed, Dreamfall 2). You appear to be dead or dying (Hitman: Blood Money). You travel through Violette's story to find out how you came to be dressed in lingerie (That's original, if somewhat pandering!)

The control system is particularly nasty (Alone in the Dark 2008), as it tries to be new, and ends up being awkward. By far the worse is switching between normal view and aimed mode, which uses the scroll button. This is unbelievably awkward, and you can't understand the pain I am referring too. Let's just say that when you have to suddenly switch, say if a guard catches you, after awhile you find it easier to reload.

Then there is the lack of help, visual clues, and shadows, all leading to easy mistakes. Of course Violette turns a shade of purple when she is in the shadows, but this isn't as helpful as it sounds. You can be in pitch black, and can still be spotted. It is a case of feeling your way thought, and this means a lot of dying in the process. Especially In the beginning, when you are new to the game.

This is where morphine comes in! Violette is able to pump her lifeless body, which somehow aids the memory of her story. Confused, yeah me too, from her hospital bed she can use morphine to slow down time (Max Payne, F.E.A.R), and avoid/kill enemies. This is an event she has already lived, and is able to affect in the present! But morphine, ammo and items are sparse in a level, which makes Southpeak look stupid as what they give in one hand they take away with the other.

But the biggest qualm I have is the fact that Violette's stealth mode, requires that you must kill targets. "Violent Backstabber" as I've come to know her, is very heavily reliant on the knife (Turok) and silent kills (Sam Fisher). So much so, that when you are discovered, it is really difficult to switch to aimed mode and fight your way out. You can of course use morphine, and run past a whole army of guards, but it's pretty much a once shot deal, as everything is in short supply.

I never thought I would say this, and those fans of Sam Fisher please cover your ears, but silent killing is quite boring. While each time you are rewarded with a little gruesome cut scene, you almost half wish you were Sam Fisher, and at least had the choice of non-lethal. Of course secretly, you always accidentally hit the right mouse button; by accident! But at least it was an accidental choice!?!?

Level enemies are easy, and the AI isn't that clever. Walking patterns are easily discovered, and any helpful objects seem unnecessary. For example, you are able to pick up an SS uniform, which allows you to walk past guards. This is fun, but feels contrived, and you wonder if you could have completed the level without it. There are other ways to kill, while not as silent, through explosive or poisonous barrels, electrocution and fire. These all have their glee factor, but when attached to this game soon wears thinly.

Level designs are very linear too, and a little too easy. In any one room (area), there will be at most 3 enemies, all walking their set paths. In later level this changes to 4 and then 5 or 6 maximum. After a short scan, it's too easy to work out and take down. There is generally only one path, though sometimes there is an extra entrance into a room. While I can't say the game is totally boring, it does become rather passé quickly.

But by far the worst thing about this game is that, at times, there are some really enjoyable moments. Violette is a pretty girl, with a suave British accent, a gripping storyline, some good stealth moments, and good use of the knife kills. The only problem, they've been done before and far better. If you can bear thought the first few missions, and learn the nuances that make this game awkward. There are some good gaming moments to be had, unfortunately by this stage many people will have given up.

For those that had the determination to stick with it. Is there a reward? Afraid not! The story has a bit of an anti-climatic ending. After several levels you find out the true nature of the story, and then understand what this game is all about. Moral Dilemmas, the ending is suppose to test yours, it's supposed to make you think. And not think of the moral dilemmas of trying to return this back to the shop where you bought it from.

This is where most of the interest lies, in the real life human inspiration, that Violette Summer was born from. Violette Szabo, or Louise, or even La P'tite Anglaise, was a WW2 spy, who met an unfortunate end, after her second mission. After reading this, I was a little upset, it just felt a little cheap using this lady, but then I realized that perhaps it was a story that wasn't told well. Perhaps if this had been a better game, perhaps I would feel differently.

Finally, after about the 6th mission, you start to see all the moral choices involved. I remember the moment when my stomach turned. I wondered how Southpeak dare to show this! In one mission, you are making your way through the ghettos, where the Jewish people were housed, until the concentration camps became the rule. As you progress through the level, you are witness to a multitude of dead bodies, men, women and even uni-sex children. This, I felt was wrong, but it wasn't until I was crawling through a hole, when I was confronted by a dead child staring back at me, on its side in a heap. At the time, I didn't know how to feel, but I can tell you this. All the Germans on that level received a much more malicious stabbing.

Perhaps this is Velvet Assassin's point, but it's a point not well made. Personally if you have to show this kind of shock morality through a game, then perhaps Southpeak need some guiding? Using images to provoke rather hateful emotions is a low blow. Don't get me wrong, humans should be responsible, and shouldn't blame a medium, because it's an easy get out clause. As the fundamental essence of a video game or movie, is purely entertainment.

But even the hardest of noses will find this stench hard to bear. It's these games that give Jack Thompson well justified ammunition. While it's not a big deal as you may have read this out to be, sometimes games can take it a step too far, and Southpeak, I feel have jumped it.

Perhaps the most puzzling things, is the way the game portrays the German people! It's a barrage of horrible this; inhumane that, and how could the German people do this kind of thing. That is until you see the final credits and realize that this game was made in Germany, by these inhumane German people. Now either this is some kind of "Look at me, I am Human, I am a double standard", or the people working on this game, must have done so through gritted teeth. Perhaps why this game isn't as good as it could have been. I certainly wouldn't have done my best, referring to Germans as evil, if I was German myself.

As for the ending, I get it, I understand it, but unfortunately it is portrayed badly. In fact the whole last level is a shambles, and the worst being that the game scores on how stealthy you are. So the last mission, all about noisy revenge, you should not expect a high score. It feels messy, sloppy, and just downright lazy. But then again it's a reoccurring theme throughout the whole game. This really isn't what you want from a good stealth game, play Splinter Cell instead. If only Sam Fisher looked as good in leather!
James