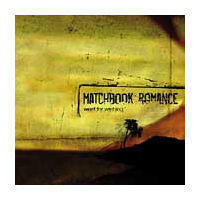 What we have here is another case of a band that is trying to imitate Taking Back Sunday. While Matchbook Romance isn't quite up to the level of the aforementioned band, they do manage to be overly predictable. Matchbook Romance takes the pathetically catchy vocal melodies, guitar riffs, and harmonies of The Starting Line and crosses them with Finch's harder side of double-bass and multi-layered screaming. Essentially this is a good thing right? Not exactly.

Matchbook Romance is everything you would come to expect from the next premiere Drive Thru Records band; yet DTR didn't sign them. Picking Steel Train over these fellas, Epitaph guru Brett Gurewitz quickly nabbed them, signed them, and produced their debut EP, 'West for Wishing'. Formerly known as The Getaway, Matchbook Romance was signed after their demo was downloaded online. Not too shabby for a bunch of kids who had faith in Mp3.com.

"14 Balloons" kicks off the EP with its overproduced mono-to-stereo vocal effects, and a heavy double-bass chorus. As soon as the track really starts moving, it suddenly stops, making the track more of an intro than an actual song. The second track "The Greatest Fall (of All Time)" is the bands first single and certainly has gotten them some recognition, being featured on the Atticus II compilation as well as Punk-O-Rama Volume 8. The sappy vocal harmonies of Andrew Jordan and Judas Depaolo are so pop punk, it almost sounds as if they have Down syndrome. Take a guitar riff that sounds blatantly stolen from The Starting Line, throw in some screaming, and the band attempts to show that they are something more than the typical crybaby emo of the now popular genre. Yet the racket they create is far from hardcore; leaving the band somewhere in between, not really pleasing anyone, except the pop punk kids who want to be tough.

As the disc progresses, the sound becomes more and more cookie-cutter generic. "Farewell to Friends" is an up tempo pop-punk song with lyrics so amateur it makes me want to gag myself. "The stars, they lay across the sky perfectly/It's our last night together". In fact the only thing that saves the song are the crashing guitars at the end. A piano also kicks in during the bridge, and when mixed with the guitar sounds almost like epic metal band Faith No More. In fact, that's the only reason I'll even listen to the song. The second single "Hollywood & Vine", isn't a bad song, but its not exactly good. It can be found on the Vans Warped Tour 2003 compilation. The teaser EP closes with "Save Yourself" another generic up-tempo song with more down syndrome sounding vocal harmonies. I'm sure the pop-punk kids out there will eat up the tempo-changing chorus, but really the only part I enjoy of the song is the instrumental bridge.

So in the end, 4 1/2 songs don't exactly fill you up, especially when only one or two of them are merely above average. The remainder of the disc is painfully generic. Well-timed screams and brash guitars don't make up for sappy songwriting.