The Wonderful 101 (Nintendo Wii U)

Some Kind of Wonderful 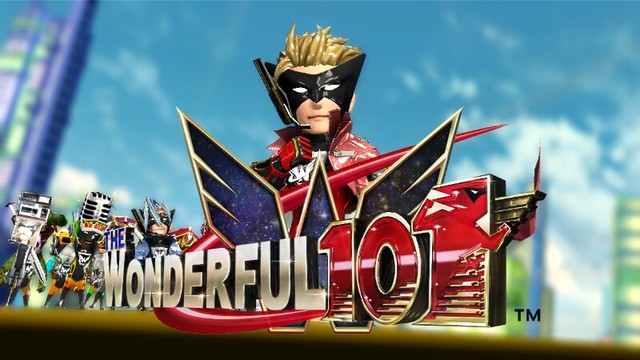 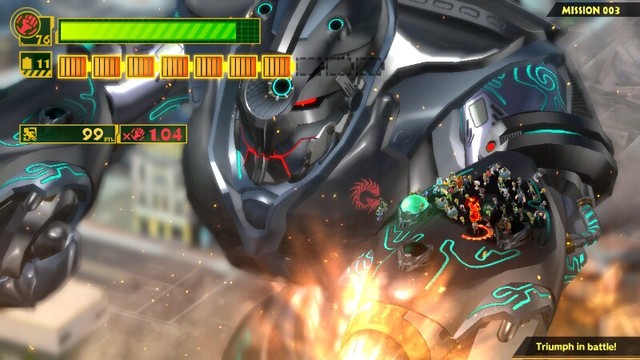 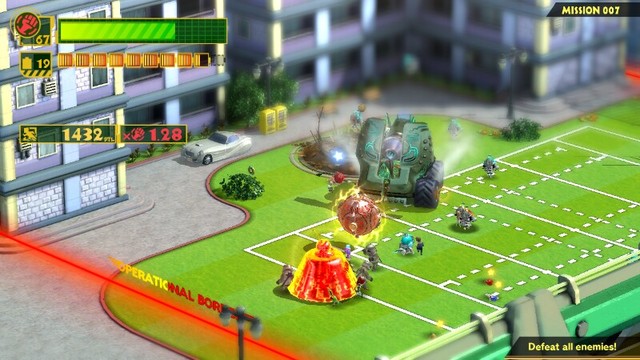 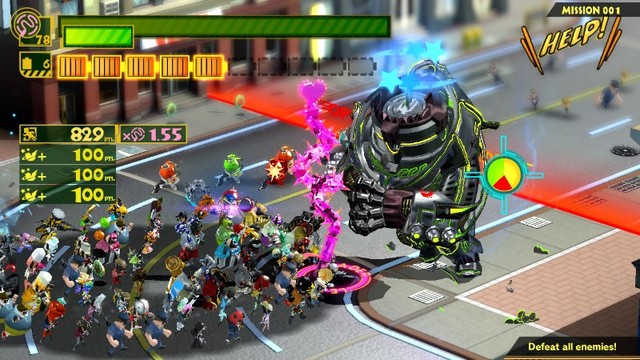 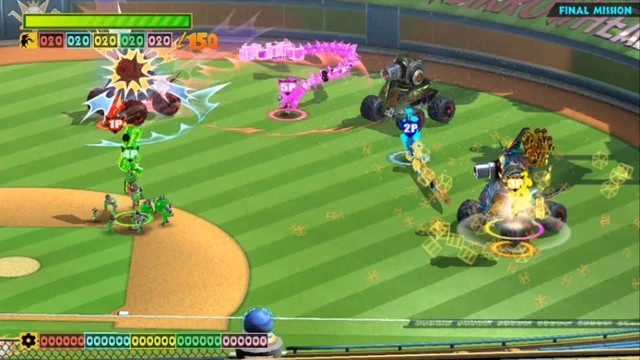 Platinum Games has a solid reputation for coming up with action-packed, manic, usually brutally challenging gaming experiences. When it was announced that Nintendo and Platinum Games were joining forces for two games, many grew excited for the possibilities. While the second game of the partnership won't be released until next year, the Wii U and its owners have gotten a first taste of what Platinum Games is made of with the delightfully wacky The Wonderful 101, which is, without a doubt, inspired by Japanese superhero shows such as Super Sentai. Should Wii U owners unite and purchase this game?

It's been twenty years since the Earth invasion by the forces of GEATHJERK. A group of heroes fought them from the face of the planet. Now it is the present day and an alien invasion has once again hammered Earth. Riding in a school bus with his students, Mr. Wedgewood gets caught right in the middle of the action in Blossom City. Making sure his students stay away from the action, Wedgewood pulls out a necklace with a special insignia hanging from it and transforms into Wonder Red! It's time for the Earth's greatest defense, The Wonderful 100, to team up and take it to the GEATHJERK alien army.

Right from the get-go, The Wonderful 101 is an absolute adrenaline rush. You're constantly thrust into insane moment after insane moment, and each time you ask yourself, "There's no way Platinum can top this moment, is there?" Then they do, and then you just stare in awe at what unfolds in front of you. In my play time with The Wonderful 101, I fought on the arms of a massive robotic menace, I played a Punch-Out!! inspired boxing match with a machine of even more colossal size, I piloted the Virgin Victory, ship of the Wonderful Ones, through a climactic scene of firing lasers and falling buildings, and I flew through an expansive fleet of enemy ships in an ultra-powerful robot. Each moment far outdid the last. Each moment put a stupid smile on my face.

The Wonderful 101 is designated as a mass hero game. As long as there is battery power to work with, you can draw a symbol either on the GamePad touch screen itself, or use the right analog stick to unite with your other heroic brethren to take the form of a myriad of objects. Wonder Red summons a mighty red fist to smash through foes' defenses, while Wonder Blue calls on the power of his Valientium Blade, able to slice and dice through enemies like butter. Each of the main cast of Wonderful Ones has their own special power, and these need to be cycled through to solve puzzles, find enemy weaknesses, and uncover hidden areas. I found myself going back and forth between using the GamePad to draw symbols and using the right stick of the controller. It simply depended on what was easier to do for a given shape. For instance, I can easily do Wonder Pink's whip as it is a simple "S" shape, while Wonder Yellow's hammer is more complicated to draw, and therefore better saved for the touch screen.

The basic flow of The Wonderful 101 is to move from battle area to battle area, where missions primarily take place, while doing some exploration of each level, participating in platforming, and solving environmental puzzles in between these segments. You'll come across places where a circle of citizens cry for help. Drawing a loop around them brings the group to your side as temporary superheroes. Hey, the Wonderful 100 don't discriminate! Alongside hiring new heroes, there are plenty of hidden goodies to collect throughout each level. You can find platinum coins, hidden figurines, data files on Wonderful Ones and enemies, as well as special heroes to join your brigade of bravery.

Additionally, there are segments of the game where you'll enter into special indoor areas and be forced to rely on the GamePad screen to see the action. These segments are an interesting experiment, but the game would decidedly be a bit better off without them.

Outside of exploration, there are the fights-- most of which occur in confined areas, cordoned off by red walls. Battles are vintage Platinum Games. The Wonderful 101 is no button masher. You're free to try that approach, but you'll soon find yourself on the receiving end of a pain sandwich rather quickly. No, The Wonderful 101 is a test of skill first and foremost. Through utilizing Unite Morphs (i.e. Wonderful One's special moves), you can lay the hurt on enemies. You can even assign part of your group of heroes to unleash one or several Unite Morphs while you attack directly with your own, a great approach to a swarm of enemies, or a baddie with a massive amount of health.

Additional abilities can be purchased with in-game currency, such as turning into a mound of gelatin at the last possible moment to deflect a foe's attack. However, that move, Unite Guts, won't work on every attack. For those other kinds of attacks, it's better to simply evade with a press of the R button.

You are graded upon how fast you completed a given mission, how high of a combo you acquired, and how much damage you took. Depending on how well or how poorly you do, you can get anywhere from the best rank, the pure platinum, to the worst rank, the embarrassing consolation prize. As there are five difficulties, each with separate ranks for each level, it is a true test of skill and endurance to get all pure platinum ranks in every mission of every level on every difficulty.

Some of the difficulty of The Wonderful 101 doesn't come from skill-required areas. No, the game can be a little hard due to the sometimes poor camera. While you can zoom in and out with the ZL and ZR buttons most of the time, on some occasions you just can't get close enough or far away enough from the action to either legitimately see what is going on (a problem compounded by all of the flash that goes on during battles), or legitimately have a full view of what dangers lurk around you. There's nothing more frustrating than taking out an enemy close by when suddenly a laser takes you out from clear across the battlefield-- one that the camera was too close in to see.

The Wonderful 101 also suffers from sometimes being too obtuse. This isn't a problem with the small amount of tutorials. In fact, that is a welcomed feature. Instead, it's more that there are situations where I simply didn't know what to do. One such segment had me at a boss fight. What the game wants you to do is to fill the eye of a behemoth robot with your Wonderful Ones. However, after multiple times attempting this and getting nowhere, I had to turn to Miiverse, which is what it's for, for the most part. Turns out I needed 100 heroes to completely fill the eye, and I needed to attack the boss's head to have more heroes get called in. Without the help of some kind folks from Miiverse, I probably would have never figured it out. What's even more annoying is when I didn't know what to do, and I was at a part of the game where I had to do an action quickly or die. I can think of few things worse than having little time to work with and having to figure out what to do just to survive.

Lastly, my other beef with The Wonderful 101 is the length of levels. Now, there are nine operations, most of which have three levels to them. The third level is always a boss encounter. Some levels are just way too long. To my knowledge, there is no option to save your progress mid-mission. This means the game is hardly one you can pick up and play in relatively short bursts. This also makes Pure Platinum runs highly obnoxious, as one mess up usually means you have to restart the entire level. Most players probably won't care about the last one, as they might just play through the game once and call it a day.

Beating The Wonderful 101 will take anywhere between 15-20 hours. There are five difficulties, allowing every skill level to have a good time with the game. In addition to all of the hidden goodies placed in levels to collect, there are also a bevy of achievements to obtain. These unlock the most secret of characters in the game to play as. If you're worried about a shortage of content, don't be. There's much to do and much fun to be had.

The Wonderful 101 is a sensational game to look at most of the time. Areas are colorful, detailed, and have a lot going for them. It's impressive to see a whole host of heroes, enemies, and effects on screen at the same time without much in the way of slowdown. Sometimes, however, this, too, can be a detriment. It can be hard to see your attacker, leading to blindside attacks at times. Things can get a little too busy. Close up, the Wonderful Ones and civilians are rather low poly compared to other objects and enemies within the game. It's only noticeable when zoomed in, and even then, it's serviceable.

The voice work of The Wonderful 101 is deliciously cheesy, without being obnoxiously so. It's the right level of ham, if that makes any sense. On the music side, the blare of heroic brass plays in numerous levels, tense strings play in boss fights, and an awesome Wonderful 100 theme song plays during epic moments of the game. Platinum Games pulled zero punches on the presentation.

The Wonderful 101 isn't a game for everyone. It has a lot of old school sensibilities under that interesting superhero coat of paint. It's a marvelously funny game with a deep and complex fighting system, providing you put the time and effort in to learn it. Yes, it's still a challenging game even then, but those Wonderful 100 certainly put a smile on my face far longer than they gave me any sense of frustration. No doubt a title that is going to be an overlooked gem in the Wii U's steadily more impressive library, The Wonderful 101 is another superb jewel in the crown that Platinum Games wears.
Review Page Hits: 0 today (140 total)
mediahook