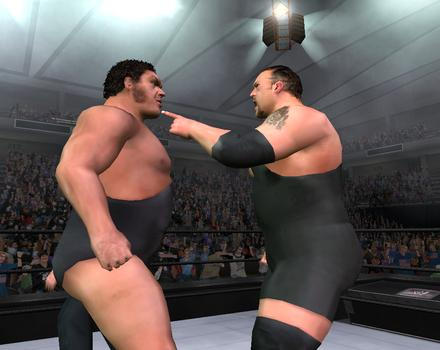 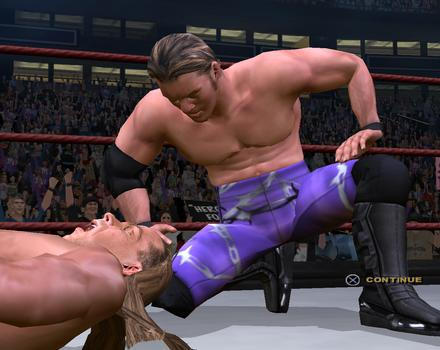 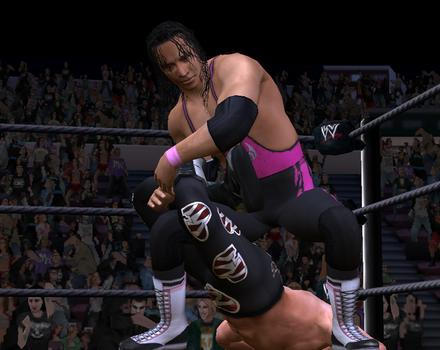 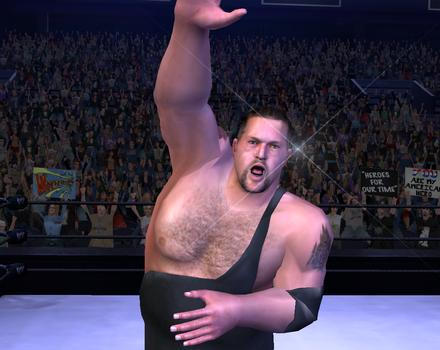 The time is February 2004. This is about when I first heard about the newest game in the Smackdown series: WWE Smackdown vs. Raw(SvR). At the time, I started reflecting on the most recent Smackdown game: Here Comes the Pain (HCtP). HCtP more or less revolutionized the series in terms of gameplay, features, and graphics; the three most important areas of any wrestling game. With such a high bar set by it's predecessor, could SvR really be the 2nd coming it was shaping up to be? In short: no. However, that's not to say it isn't well worth your $50, which it is. It's just not the end-all, be-all it could have been.

Graphically, SvR is stunning, by wrestling standards anyway. According to the developers, the wrestler models have over 40% more polygons than their HCtP counterparts, and it shows. There's really not much else to say here. You can recognize every wrestler present with just a quick glance. It is the best looking wrestling game currently available, bar none.

As usual, the latest iteration of Smackdown is packed to the brim with features, although some are not quite right. Starting with the positive, all your favorite match types from last year have returned, including everyone's favorite: the bra and panties match. The legends have also returned with notable additions like Bret Hart and Mick Foley (as Mankind).

The royal rumble has also made it into this year's game, albeit a bit different than what Smackdown fans are used to. Instead of the ol' rinse and repeat of "throw them over the top and kick 'em," Yukes has implemented the "Ring-out meter." In a nutshell, when you throw someone over the top rope, you can grapple them, and a "tap-war" begins. As you tap, your opponent's ring-out meter begins to decrease. Eventually one of you will win, and either get back into the ring, or fall to the outside, depending on who's tapping faster. The only way to refill your ringout meter is to throw others out of the ring. That may have sounded a bit confusing, but trust me, it makes a lot more sense in practice. The only other way to eliminate someone is to wear them down, then throw them out. If they've been weakened enough, they go right to the floor. The only gripe I have with the ring-out meter is that it makes Rumble matches last an obscenely long time. Whether that's good or bad is up to you.

Season mode has seen the addition of superstar voice-overs, done by the WWE wrestlers themselves, which I thought would make for a great addition. Unfortunately they're all (with the possible exception of Vince McMahon) done in this mono-toned voice, with little to no emotion. The voice-overs are so monotonous across the board that it almost seems as if they weretold to do it that way. From what I've heard, some other features had to be scaled back for the voice overs. In retrospect, that was a mistake, at least for these crappy voice-overs.

The season mode itself has also taken a hit to the non-linearity that was present in last year's game. SvR has nowhere near as many branching story-lines as HCtP had. Also, the ability to walk around the arena has been removed. You are confined to your locker room, which leans toward a much more linear season experience. It's still enjoyable, just expect the story-lines to repeat more than they did in HCtP. The ability to upgrade your star's in-season stats has also been removed, at least I think so. You collect experience points just like last year, and you can upgrade your wrestler's stats, however, this "season mode" version can (as far as I can tell) only be used in modes outside of the season mode. Kinda defeats the purpose, huh?

For some strange reason, the tag, cruiser-weight, and women's titles have been removed altogether. The omission of the 2 latter titles doesn't bother me, but the tag titles being removed really irks me. I still can't come up with a valid reason for them being removed (no tag titles also cuts down on the number of possible story-lines in season mode). So yeah, go figure.

Past those things, season mode is pretty much more of HCtP, which really isn't a bad thing.

Create-A-Belt (CAB) and Create-A-PPV (CAPPV) have both returned for 2004. One triumphantly, the other not-so-triumphantly. CAPPV basically allows you to set up a card of up to 8 matches, anyway you see fit, only limited by the match option present in exhibition mode. You can only defend your CAB belts here, in CAPPV mode. CAB mode is the not-so-triumphant of the two. CAB is packed with different belt styles, centerpieces, jewels, etc. Enough for you to make just about any belt, past or present, and just about any you can think up. The problem is, you have to buy the belts with Smackdown dollars (mainly earned through season mode), and the belts are prohibitively expensive. I went for something basic my first time out: the old-school NWA heavyweight belt that Ric Flair wore for so many years. Total cost in Smackdown dollars: approximately $365,000. No, that's not a typo. The most basic belt you can have, the default one, is around $54,000, and considering the average season mode match nets you $2,000 to $3000, it can take quite some time to have enough cash to buy a spiffy-looking belt for your CAPPV's. The other problem is that the title defense (of a CAB creation) is rather screwy. In a single player match you can't defend your title against the computer. Regardless of who you won your last title defense, the computer controlled wrestler is always the champ, meaning, without a buddy coming over, you can never defend the title. It's extremely stupid, I know.

The Create-a-Wrestler mode is just as in-depth and nigh limitless as it was last year. If you can dream it, odds are you can build it here. Admittedly, I don't spend too much time here, so I wouldn't have noticed any small changes that might have been made to the mode.

The much lauded and much desired online mode is here. However, I'd gladly give it back to Yukes. The online mode is a sham, in my opinion. The only match types available are singles match and Bra and Panties. That's it. No stat-tracking, no nothing. A complete travesty. What is there is done rather nicely though, with a pretty much lag-free affair going on (assuming you have a decent connection speed).

The game comes up roses in the sound department (terrible voice acting aside). Every chop, every slam, every bone-crunching chair shot, and every other wrestling related sound, sounds exactly the way it should. They did go a bit heavy on the Powerman5000, but I don't really mind.

We've finally arrived at the meat of the game: the gameplay. SvR dog-slaps every other wrestling game ever made in this department. It only takes two words to sum up the gameplay: Best. Ever. The game uses what I like to call "a modified Aki system." It's exactly like last year with a subtle, yet effective difference. That difference being, the power-move grapple is a tad slower than the other 3 grapple types, meaning you now have to wear down your opponent a bit before going for a high-impact move. It might not sound like much, but in practice, it makes a big difference.

For the uninformed, the grapple system is a simple, yet deep one. You press O and a direction (up, left, right, or down) to initiate different types of grapples: power, quick, submission, and signature. After grappling your opponent, you press O and a direction (or X for striking attacks, which are the same no matter the grapple) to execute a move. All told , you have approximately 18 front grapple moves.

In standard Smackdown fashion, 99% of the animations are just beautiful. From Rey Mysterio's howl before the 619 to John Cena's "You can't see me," prior to the F-U, they're all here and animated wonderfully. There are a couple questionable animations, however, as I said, 99% are spot-on.

In the end, HCtP threw a perfect lob, yet somehow, SvR managed to miss the easy spike. SvR just seemed to falter in such simple areas, even ones HCtP already had covered. On it's own, SvR is worth the $49.99 price tag, however, it could have been worth well over a $99.99 price tag with some more time.

Final Verdict
Buy it. SvR is head and shoulders above just about any other wrestling game (with the exception of HCtP). It does falter here and there, but comes through where it counts the most: gameplay. As a long time fan of wrestling and wrestling games, I suggest you pick up SvR, and let's all cross our fingers for the godly wrestling game the next Smackdown could be.
Review Page Hits: 0 today (164 total)
mediahook