Official Site of the Game 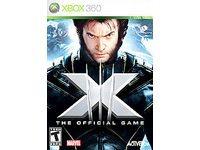 When it comes to the X-Men, I tend to jump on anything that comes down the pipe outside of the comic realm, such as video games, animation, and the movies. After thoroughly enjoying both of the most recent console X-Men games, those being the Legends titles, the taste of mediocre or bad X-men games had dissipated for the meantime. There again was hope.

Then came the announcement of X-Men: The Official Game, which was to fill in the gaps between the last movie, X2, and the new movie, Last Stand. Three playable characters (Iceman, Wolverine and Nightcrawler) with different styles of play, including the crowd favorite Nightcrawler, (who was not going to be in the next (and most likely future) movies due to actor Alan Cummings' distaste of long make-up sessions and even longer amounts of time spent on set (around six months for X2)), most of the movie's cast for voice overs and an original story penned by long-time X-Men comic writer Chris Claremont and movie writer Zack Penn sounds like a recipe for success. Too bad publisher Activision chose developer Z-Axis, developers of crap such as BMX XXX.

From the start, the game feels a bit hokey. Z-Axis went with a comic book style for story telling, with high quality still photos and random "flipping" of scenes like pages to change views or angles, with the text being read by the voice actors. I am not sure if they still make these, but these are exactly like those old Golden Books kid movies in the 80's that follow the same type of set-up and execution. Yet, from the start with Beast talking at a podium surrounded with dead space, this fails to capture really any of the energy or attention that a comic book generally garners. Artwork outside of the characters are minimal at best and the fake attempt at animation is laughable. All I could think of during these was "this is the Xbox 360, not the DS!" Now I am not saying something like this couldn't have worked, but it needed to be handled by people with comic book experience beyond just reading one or two, people who understand the art of comics, not the developer looking for a cheap out for story telling.

But a strong story can at least help ease the pain of a bad story telling implement, right? Yes, but unfortunately, the story drags more than it excels. First off, using most of the original actors to voice over characters was a very important step to take in a game based on a movie, as all three playable characters' are voiced by their respective actors, along with Patrick Stewart (Professor X), Tyler Mane (Sabretooth) and Eric Dane (Multiple Man). All the other characters that have appeared in one of the three movies have been recast, and for the most part, the new actors hold their own in mimicking the original actors. That's not enough though, as dialogue is generally uninspired (though it's more acceptable here than in other places considering the action-movie source material and audience) and the actual voice acting is inconsistent. You know something is wrong when Wolverine says things that don't even sound like Hugh Jackman, even though you know it's him.

The actual story (don't worry, this part is spoiler free) is broken into three story lines, one for each character, that plays out a lot like EA's Lord of the Rings games, as you pick a level for each character as you progress up the chart. Each level moves the story of one of the characters along, though sadly, there is only a little crossover and nothing really in-game between the three. Nightcrawler's story is the most interesting here, as his story is connected heavily to X2 and since he is not in Last Stand, along with the want to find out where his character went. This storyline does not disappoint, as it includes interesting twists and cameos.

Iceman's and Wolverine's both are heavily based around overplayed rivalries (with Pyro and Lady Deathstrike, respectively) and drag accordingly. Iceman mixes it up later, running against the Sentinels, but Wolverine spends too much time with Sabretooth and Lady Deathstrike, not enough time with Silver Samurai. They both have some interesting story moments, but nothing that draws you in like Nightcrawler. But it is just enough to keep an X-fan playing through the whole game, much to my (and probably your) disappointment.

Why disappointed in playing through the whole game? It must have some good points if I finished it, right? Yes and no. Graphics look nice when you look at the main characters and villains of the game, but backgrounds and the waves of baddies lack the same attention. This game was obviously not built for the Xbox 360, it was ported and it suffers from that "just slightly above the original Xbox's graphics" flu. Thank you Microsoft for the ability to play your own music during any game, because there is no reason to listen to anything other than cut scene dialogue.

Game play, just like the story, is broken into three different parts, with a different type of gaming tailored for each character based on their mutant powers. Good idea. Execution, not so good. For starters, all three characters share some of the same elements. Each time you finish a level, depending on the difficulty selected, you earn up to four mutant strains to use to upgrade your characters' skills covering the most obvious of stats: strength, health, and mutant powers. Let me give this piece of advice: wait until you finish through a character's story arc before going back and getting left over strains, it's far less frustrating. The other thing they all share is the collecting of one Weapon X file icon and five purple Sentinel icons in each level. Too bad, other than unlocking Live achievement points, the rewards granted when collecting all the pieces for each character are worthless, being one alternate costume and one Danger Room level that gives nothing back if you play it.

Again, Nightcrawler comes out on top here. Z-Axis found a simple yet effective way to allow players to utilize Nightcrawler's teleportation powers. A small flame serves as a visual symbol to where you can teleport to, so when you push the button to teleport, you are already locked on to the spot you are going to go to. This makes it feel a bit like the web-slinging from the recent Spider-man games. It is extremely easy to get used to and is fun, being able to teleport all over the place. Fighting also utilizes the same teleportation powers, allowing players to teleport behind bad guys, land a few blows, then teleport away, though the second part doesn't work very well. In the middle of a heated battle with multiple enemies, it is extremely hard, if not impossible, to lock-on to a specific guy and bounce around, teleporting and punching. I am not sure it even works unless there are only two guys on the screen, that's how bad it was. I ended up just teleporting behind the same guy, over and over again, throwing down the same combo every time. And they let me, every level, every difficulty. Yawn.

Iceman's levels are played out like an on-rails shooter, sometimes even like Twisted Metal in slowdown (see the city level against Sentinels), and on paper that sounds like a decently fun way to break up the hand-to-hand fighting of Nightcrawler and Wolverine. And at times it is, my favorites being taking down giant Sentinels along a freeway or chasing down Pyro's fire minions as they fly down into the earth to set off a nuclear reactor. But an absolute lack of difficulty, level and goal repetition and a unresponsive lock-on system coupled with two attacks that are essentially the same sucks out any of the fun, making them feel more like a tacked on mini-game than a third story pillar.

Lastly, Wolverine's levels. If you know anything about his character and his role in video games (brute force and ass kicking), then you can know what just about every developer has done with him. Z-Axis is no different, only worse. I don't remember Wolverine doing somersaults in-between beating people up, but that is all you do in this game. To move while blocking causing you to somersault, and with there almost always being a need to block, this gets laughable fast. And when you are blocking, you are letting loose the same one or two combos on the bad guys. Higher difficulty just means the baddies block more often and take off much more life, but their patterns and mannerisms stay the exact same. I could find simple enjoyments with the other characters, but Wolverine's levels began to become chores one has to complete to unlock levels for the other characters.

It's a shame that Activision gave Z-Axis the reins to this game instead of one of their more competent developers, because what we have here is exactly the kind of hit-and-miss, average movie-based title that can be 100% finished in a rental. If you are in the middle of an X-men kick or want to know what happened between the second and third movies, give this a rent on any of the home consoles (the games are essentially the same on PS2, Gamecube and Xbox). For $8, it's not a bad time for fans, but there is absolutely no replayability here, unless playing through the same game with a different costume is your idea of replayability, so avoid buying this at all costs. Non-fans stay far, far away. There is nothing here a non-fan will want to put themselves through. It's embarrassing enough to say I did.
Review Page Hits: 2 today (126 total)
mediahook