A puzzle game that you might want to miss. 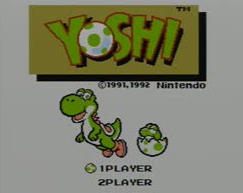 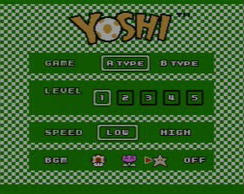 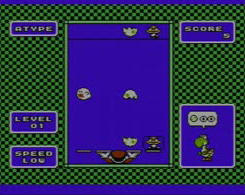 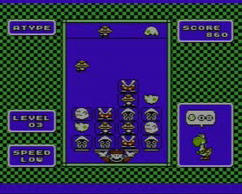 From 1991-1993, Nintendo decided to squeeze what power was left out of the NES and Famicom in order to truly make way for their SNES, which was already out in stores by then. There were many NES games made by that time, such as Wario's Woods, MegaMan 6, Yoshi's Cookie, to name a few. Yoshi the dino just made his claim to fame in Super Mario World, and Nintendo chose to put him in a puzzle game that bears his name, Yoshi. Just plain Yoshi. Also known as Mario and Yoshi (due to the plumber's role) and Yoshi's Egg.

To start, there's no story to this game. No princess-rescuing, no baby-saddling, no such thing of the sort. You get to the title screen, and immediately you set the options to the game. Simple as that. As for the gameplay, you move Mario on the bottom of the screen, catching enemies as they fall. If two of the same enemy stacks on top of the other, they vanish. Sometimes two halves of one egg will appear, and if they unite, a Yoshi will appear. If enemies are between the two halves, a bigger Yoshi will appear. The more enemies stacked, the bigger the Yoshi. Naturally I don't need to tell you what happens if you let the enemies fill to the top. Two players can play this game as well, with Mario and Luigi competing against each other.

The graphics are standard for an NES game, considering that this game doesn't have much. They do appeal to the eye, and are quite impressive compared to earlier NES games. Yoshi looks like his older self, and Mario looks like his Super Mario Bros. 3 incarnation after you get a game over. The music is rather atmospheric, but can hardly offer much, considering that there's three pieces of music (representing power-ups). They do blend well into the game, although they aren't particularly catchy.

If you're looking for a starting game or are literally scraping at the bottom of the barrel, this game might be for you, but if you're looking for a hardcore title, you might make this a pass. There's other games like Puyo Puyo/Pop or Tetris Attack/Puzzle League that may appeal to gamers who want a good challenge or a good story against the computer. A nice game, but mediocre to say the least.
Review Page Hits: 0 today (237 total)
mediahook