The Young and the Hopeless (Good Charlotte)

If you are a MTV watching adolescent, by all means buy this record, otherwise steer clear. 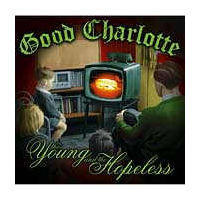 Mest's "Destination Unknown" was met with mixed feelings and Goldfinger's "Open Your Eyes" was definitely better than their previous effort. This brings us to Good Charlotte, the third band in the non-Drive Thru-major label pop-punk clique. "The Young and the Hopeless" however falls short and lands nowhere near their fellow buddy's latest releases. After releasing a strong self-titled debut album, spawning a few radio hits such as "The Little Things" and "The Motivation Proclamation", the future looked promising for Good Charlotte.

While most true punk fans would rant and rave about how terrible this band is, as well as shout profanities at this band whenever they made an appearance live or on television, I actually respected Good Charlotte, regardless if they were ruining punk rock's whole image. The band is almost a contradiction to themselves, dressing in The Casualties t-shirts with mohawks, Dead Kennedy's patches, eye shadow, and piercings. This is what most punk listeners find offensive, the fact that the band attempts to look hardcore punk, yet writes catchy, radio friendly, alternative sounding pop music, far from true punk rock. Even though their intentions were to just write a good rock record, their image immediately turns most listeners off (they even mention it in the liner notes). With the release of an album like "The Young and the Hopeless", I'm beginning to lean toward the side of the "I'm punk rock because I listen to NOFX" fans out there.

The album is nothing more than a few hit singles, and that's it. GC followed the same formula in writing their second album it shows, much more obvious than before. As soon as "The Anthem" kicks in (a song featured in the recent video game Madden 2003, along with bands such as Andrew W.K., Bon Jovi, and Thrice), you pretty much know what to expect. It's a radio friendly song that gives listeners (their target obviously being adolescents) a reason to lash out against parental authority or the growing pains of high school. The next track is the hit single "Lifestyles of the Rich & Famous", which is overly predictable and "borrows" Iggy Pop's classic drum beat from the song "Lust for Life". In fact, the rest of the album is a complete rehash of the first. Once again, lead vocalist Joel seems to be stuck on the subject that his dad left his family when he was a kid. Given the fact that he stressed this enough on the first record, it is even more evident on the new record. On top of that, most songs deal with the typical Simple Plan-esque "I'm stuck in high school and it sucks" cliché, when in fact the band isn't even in high school.

"The Young and the Hopeless" did have one track that did stick out from the others, being "Girls & Boys", easily being one of the worst songs ever. With a record with tracks like these, it's hard not to laugh at these guys. Perhaps the only decent tracks on "The Young and the Hopeless" are the fast-paced ones like "Riot Girl" and the title track, but these songs are few and far between. In fact this record sounds more like something you would hear from Third Eye Blind as opposed to Mest or Goldfinger -- commercial, over-produced, and totally painted-by-numbers. Even getting Josh Freese to do the drum tracks didn't make this a good record. In fact, the only reason I give it two stars is for the bonus material on the disc, which is more entertaining than the album itself. If major label punk is what you are looking for, stick with bands like Green Day or Midtown. They will at least point you in the right direction.