A fairly forgettable action rpg in the vein of The Legend of Zelda series, which ends up being enjoyable after all is said and done 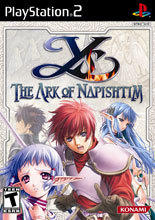 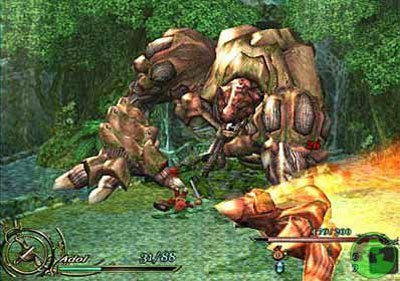 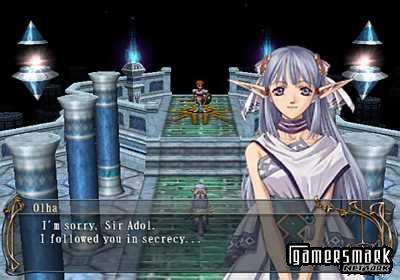 Ys VI: The Ark of Napishtim is a rather unexpected new entry in this long running series, which began in the mid 1980's and its last entry arriving over a decade ago. You play as a castaway pirate named Adol Christian, who finds himself stranded on Canaan Island after his ship is attacked by the Empire. He quickly befriends the dog-like Rheda tribe and is off on his adventure in full fledged RPG-cliché fashion.

Graphics: Considering that Ys VI is the first new game in 10 years the developers had a few options concerning the graphics since things have vastly changed in gaming hardware during that time. They could have gone the full 3D/CG route of popular RPG titles such as Final Fantasy X and Xenosaga or kept the graphics simple as a throwback to the classic Ys titles. The developers obviously chose the latter, even throwing in some decently rendered CG cut scenes. While the animations may not be the best out there, the graphics are very well done and fairly detailed, especially the still character artwork during conversations. While nothing revolutionary graphic-wise Ys VI's graphics are nice to look at and do the series justice, fitting the world of Ys perfectly.

Gameplay: Ys VI proves yet again that even dated gameplay can still provide an enjoyable gaming experience. Nothing too complicated here, Adol has 3 basic attacks: slash, air slash, and jumping down-thrust; as well as three different swords to choose from, each possessing their own magic attacks. By keeping the attack system simple, the gameplay in Ys VI really shines with a quick learning curve and some really fun battles and uses of the different swords.

Sound: Keeping with the "old school" flavor of the graphics and gameplay Konami decided to go with an almost midi-sounding musical score which for the most part is just OK. In this reviewer's opinion, the sound (effects and music) is integral to a positive gaming experience and Ys VI just didn't really cut it in either aspect. The voice acting on the other hand is a mixed bag. Some of the characters are voiced superbly, while others are just horrid and poorly acted. It was nice, however, to see that every line of conversational text in the game is voiced fully.

Controls: Basic, simple, same as above. Extremely easy to learn and master. Why use complicated controls when it wouldn't fit the game?

Fun Factor: When you get down to it, Ys VI is a very fun action RPG. The story is marginally interesting, the gameplay is fun as heck, controls are simple to learn and master, and Ys VI brings back memories of other old school classics, such as Beyond Oasis, Zelda III, and even arcade platformers.

Overall: Ys VI is recommended only if you like an action RPG with a "classic feel". But don't expect an impacting story, interesting characters, or revolutionary gameplay. Ys VI is quite fun, yet a little too easy and much too short (fifteen hours tops). The Island of Canaan is also much too small and you'll find yourself visiting the same areas over and over again with little challenge. A little more variation in enemy types and a more epic feel to the exploration would have been nice, but doesn't make the game any less playable. Not highly recommended, but worth a play through if you're in for some fun boss battles and a quick action RPG fix.
Review Page Hits: 0 today (171 total)
mediahook