Slick Shoes
Side One Dummy Records

Pick this up now. My pick for CD of the summer. 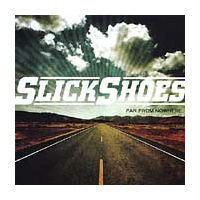 Slick Shoes is a band that needs no introduction, but I might as well introduce them anyway. For the past eight years (since vocalist Ryan Kepke was a mere fourteen years old), the band has been churning out metal influenced, speedy technical melodic punk, in the vein of Strung Out or Bigwig. Having released four full-length CD's on Christian super label Tooth & Nail, along with an EP, and a split EP with Cooter (now known as Autopilot Off) on Fueled By Ramen records, the band never really had a breakthrough hit...until now. 2003 brings a new record label, a new lineup, and a brand new full-length CD. If this CD doesn't get the band some of the recognition they deserve, I don't know what will.

Lineup changes have plagued Slick Shoes for sometime. The original lineup consisted of Ryan Kepke on lead vocals, Joe Nixon on drums, Jackson Mould on guitar, and Jeremiah Brown on bass. The original lineup recorded the self-titled EP in 1997 on Tooth & Nail as well as the band's first full-length 'Rusty' later that year. The next year, Slick Shoes would add Dale Yob as additional guitarist for their next full length 'Burn Out'. With two guitar players, Slick Shoes sound got much more darker and technical.

Two years later brought guitarist Greg Togawa, after the heavily praised Jackson and Yob exited. Having only a single guitarist, it was much harder for the band to write technical songs (yet Jackson did it on 'Rusty' and bands like Sick of Change managed to do it, hmm...). While Togawa was a great songwriter, the next three releases, 2000's split EP with Cooter, 2000's full-length 'Wake Up Screaming', and 2002's self-titled full-length all suffered from being overly poppy. Gone were the crazy guitar solos of the EP and 'Rusty' and the heavy technical riffage of 'Burn Out'. For three years I tried to con myself into liking the new Slick Shoes sound, and while songs like "Angel", "Ten Ways", and "Alone" are great pop punk songs, they just aren't the Slick Shoes that I know and love. All the changed with the release of 'Far From Nowhere', Slick Shoes' brand new full length album.

There are actually three new members since last summer's 2002 self-titled full-length. Jeremiah was the first to go last summer, so in came Kevin Clark. Jonah Peterson of the band Phaeton Lane was brought in as additional guitarist to accompany Greg Togawa, but soon Greg would leave. David Stoltenberg filled the gap at lead guitar. This had Slick Shoes fans asking one question: "Can this new guy shred as much as Jackson?" The answer is yes and David proves worthy with the intense riffs of "Carpenteria" or the soaring guitar solo in "Down Hill". Sure Greg used to be a great guitar player, but he rarely wrote technical riffs or guitar solos. Luckily David fixes that problem. Now you are thinking: "Ok this new guy can shred, but is he as good of a song writer as Jackson?" The answer: yes.

The twelve tracks (thirteen if you include the hidden one) surpass even those of classic 'Burn Out' or 'Rusty' era songs. 'Far From Nowhere' essentially takes the best parts about the old and new Slick Shoes and combines them into one. It takes the heavy technical riffage and metal inspired solos of the Jackson-era and blends them with the pop sensibility and catchiness of the Greg-era. The result is phenomenal. 'Rusty' and 'Burn Out' were both great records, yet they suffered from a bad case of repetitiveness. Since Slick Shoes songwriting has matured over time, this problem no longer plagues the band. Unlike other bands of the ilk who have been releasing slowed down, more matured music, Slick Shoes cranks up the tempo and pounds you from start to finish. Slick Shoes is one of the few bands (Rufio does not count) that still you use the standard new school punk beat (widely known as the "Fat Wreck Chords" beat). Even Strung Out, pioneers of the beat, has stopped using it.

The first track, a single called "Darko", is probably the best example of the new Slick Shoes sound. Fast, pounding, melodic, catchy, technical, and yet not predictable. The tempo quickly changes during breakdowns and come unexpectedly, grabbing the listener by surprise. An excellent way to kick off the record. "Carpenteria", the second track on 'Far From Nowhere' starts off with a Bigwig-styled guitar solo and later moves in to crazy riffs (that I mentioned earlier) that would turn Rufio green with envy. "Always There" is the prime example of the mix of old and new styles. Crazy riffs combined with catchy choruses are present and in control, with a great guitar solo I might add. Three great tracks in a row.

The album's first single "Now's the Time" is the slowest track on the record. Its catchy melody (borderline on annoying) will get stuck in your head for days. Pseudo-metal riffs are the only thing that does it for me in this one. "Sleep In" is a straightforward rocker along with "We Were Young", a song that reflects on growing up. While neither of the tracks standout, both are still good. Originally appearing on the Atticus 2 compilation, "Once Again" was wisely re-recorded for 'Far From Nowhere'. The verse now sound less conflicting with the music and the chorus is still catchy as hell. As far as pop punk goes, this is an excellent song. "Simon's Quest" is another single off the record, but I'm not really sure why it was chosen. Nothing really stands out for me other than a few riffs and the fact that the tempo doesn't soar. "Hope Against Hope", one of the best songs written during the Greg-era, makes its triumphant return on 'Far From Nowhere'. While the gang vocals have been lost in the transition, the song still carries the intensity and anger that filled the original, a great punk rock track.

The cheesiest song (a Slick Shoes album wouldn't be a Slick Shoes album without one cheesy song, I'm still trying to clear my mind from that horrible "Friday Nite" song on the last album) on 'Far From Nowhere' is "Hello Stupid". The lyrics are quite, well, stupid, yet the riffs are insanely catchy in a ridiculous way, and the chorus is second to none. I really like this track for a reason that I can't quite put my finger on. "Down Hill" is technical punk rock played to perfection and David absolutely flies on the tremendous solo. Excellent. "Drive to the End" opens exactly like "Pass Me By", the second track off the bands 2002 release. It often makes me forget which disc I'm actually listening to. Still a great track. The highlight of 'Far From Nowhere' however is the hidden track. The untitled metal track (which starts at 4:20, remember Slick Shoes is no longer Christian) is so over the top and wild is absolutely ridiculous, and I love every second of it. From the Slayer-style death metal, to the metal core breakdowns, to the sky soaring 80's metal guitar solo, this is the ultimate pseudo-metal song. Rufio, eat your heart out. They couldn't do this if they tried, and they did with "The Wrath."

This brings me to the end of the review and now I'm really at a lost for words. Slick Shoes has impressed the hell out of me. Ryan Kepke's vocals have constantly been improving, David Stoltenberg's guitar playing is drop dead astonishing, and Joe Nixon still hasn't missed a beat on drums. Dropping the Christian thing is obviously for the better for this band, as they are sure to reach new heights with 'Far From Nowhere'; and if they don't, someone is going to die.