Stick and Stones is a record no New Found Glory fan should be without. If you aren't a NFG fan, then it's probably not for you. 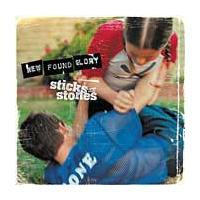 Regardless of what punk enthusiasts may lament, NFG is a good band for many reasons. 1) They pretty much started the whole "whiny" vocals thing, that so many pop-punk bands have used. 2) Their live show is full of unparalleled energy, unmatched by most bands. 3) They have "previous stuff". Unlike genre-mates, Simple Plan, Good Charlotte, and Avril Lavigne, everyone knew about New Found Glory roughly four years ago with the release of "Nothing Gold Can Stay". Since then, even as their popularity sky-rocketed, NFG remained unchanged. They've kept doing what they love to do the most: make music. That's what makes them superior to other mainstream "punk" artists.

The question that plagued my mind was simple. Could NFG release a successful album without the song "Hit or Miss" on it? Both "Nothing Gold Can Stay" and their self-titled follow-up contained the massive radio hit, which made New Found Glory immensely popular. The answer is yes. When I first heard "My Friends Over You" on a Drive Thru sampler I knew that NFG's new record wouldn't disappoint. I was right, for the most part. Joining "My Friends Over You" on the road to radio hits is their second single, "Head on Collision". Personally I don't care for the song, as it's rather slow and uninteresting, but the song even spawned a shirt design, so I guess it can't be that bad, right? Joining those two songs is "Understatement", which kicks off the record with its upbeat tempo and instantly catchy guitar hooks. It could easily be their next radio single. It's a fun song that's full of energy and a great break down.

The third track, "Sonny" starts with an excellent bass riff and non-standard tempo that carries out throughout the entire song. New Found Glory shows their roots by featuring a bundle of guest musicians. Most notably is Mark Hoppus of blink-182, who plays bass on "Something I Call Personality". Why Ian doesn't play it is beyond me, since the bass line doesn't sound overly difficult. However, two different, excellent songwriters will easily overlook this mainstream pop punker. The ballad/rocker "Forget My Name" features both Matt Skiba and Dan Andriano of The Alkaline Trio, which is somewhat shocking, considering the song sounds like it should have been on their previous self-titled released. I'm sure Alk-3 enthusiasts will not be pleased. "Belated", a later track also features Bane and What Feeds the Fire, two hardcore bands (remember one of the members of New Found Glory used to be in Shai Hulud). "It's Been a Summer" and "Never Give Up" are a pair of catchy songs, but it's hard to look at them as nothing more than fillers. "Singled Out" is probably my least favorite song on "Stick and Stones", even if it is filled with hardcore screams in the background.

Overall, "Sticks and Stones" is essentially more of the same. It picks up right where New Found Glory left off, making it no better than that record, or it's predecessor "Nothing Gold Can Stay". New Found Glory may not be able to match their best release, "From the Screen to Your Stereo", but Stick and Stones demolishes their opponents Good Charlotte and Simple Plan for the mainstream radio "punk" title. If you liked the last two records, you will probably like this one.