This is one of the best GH's box collections of Aerosmith that you could ever get. 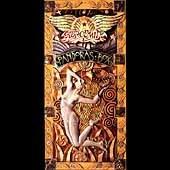 This outstanding box collection chronicles Aerosmith's years with Columbia (1972 -1982).
This 3 CD set has 52 digitally remastered songs, 20 of which are previously-unreleased recordings.

Another example of the unique songs that are included on this box set, is the very first song on the first CD. It is entitled "When I Needed You", and it is a song done by Steven Tyler's first band called Chain Reaction, before he even considered starting Aerosmith.

And as if this was not enough, there is also a great 64 page color booklet included. It has previously-unpublished photos, song-by-song commentary, and an essay by Rolling Stone's David Wild. All of this is put into a very nice box that has some interesting art work on it.

If you listen to these CD's in order (1,2,3), you can get a good idea of Aerosmith's musical growth, and how their music was affected by some of the different line-ups during the years. Also, you cannot discount that some of those years were fraught with severe drug use, and once again, the music reflects that self-abuse. And this is NOT just my opinion, if you read any quotes from the band members themselves, they will agree that the drug use almost destroyed their ability to make good music.

If you know anything about Aerosmith, you know that they have gone through many personnel changes during the years, and there were some points in which it looked like the band may fall apart all together. But once all was said and done, the original line-up got back together during the mid 80's, and they have been together ever since, and still making excellent records.

The type of music that Aerosmith plays is Rock with extreme attitude. They have been making music for over 30 years, and have had numerous hits and multi-million selling albums. Their experience in the music biz, and their longevity speaks for themselves. To quote one of their own song lyrics, they "Let the music do the talking".

I think one of the best compliments I have ever seen given to this band, was from a Rock-N-Roll legend. It went something like this: "Aerosmith is what Rock-N-Roll is all about".
This legend was the one and only Jimmy Page.