Brigandine: The Legend of Forsena (PlayStation)

Just short of a masterpiece. Just shy of failure. Overall, Brigandine: The Legend of Forsena is definitely hit or miss. 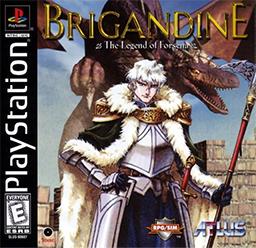 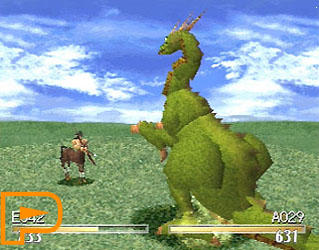 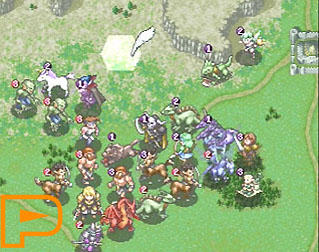 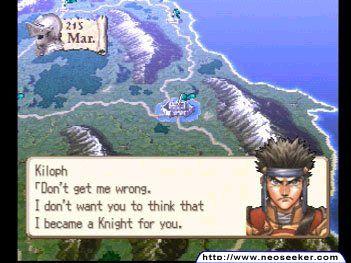 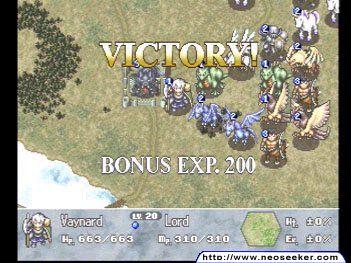 Story
In the land of Forsena a long battle has just been won by Almekia against the other kingdom of Norgard. But soon after, the General of the Almekian army, Zemeckis, is led to throw a coup d'état and throws the entire land into war. Your job is to become one of the leaders of the warring nations and return peace to the kingdom.

Getting Started
When you first start out in Brigandine, you can choose between several different countries. Norgard, Iscalio, New Almekia, Carleon, and Leonia are the selectable nations, along with Esgares if you enter a cheat code. Each country comes with a unique set of Knights and one ruler with different mindsets about why they're trying to restore peace, or to enslave the continent. Whichever country you choose, you're going to notice when you start playing, with all the text boxes, that there's going to be a lot of reading. At times, it's totally OK because the stories do tend to suck you in most of the time. But when your first battle comes up, most people are confused by the starting controls, the rune system, summoning monsters, and the turns system. But with a little experimenting and patience, you'll soon see Brigandine is one great game if you have the time.

Gameplay
This is where the game soars into the realm of greatness. But first, you're gonna want to do is go into settings and turn off the 3D segment. The 3D segments are poor at best, a waste of time, and you're going to enjoy the game much more with the extra minutes of your life that you've gained. Now you have to summon monsters, and in each castle you have different sets of monsters, each with different abilities. The great thing about all these monsters is that they can attain promotions just like knights making even the weakest monsters useful later in the game. The Ghoul, for example, is useless at level 1 and you're going to wonder why you have them but when it levels up to a vampire at level 10 and Vampire Lord at level 20 you're going to be patting yourself on the back. The downfall is that they go up in Rune cost, which each knight has a certain limit and cannot go past the limit, but you can quest your knights out for items which bulks them up a little. The knight system is where the game gets really tricky because some knights just don't stack up to most of the others and I wouldn't waste my time trying to level them up, but I did and they do get stronger than some of your more powerful ones to start out with.

Battles are the part of the game where most will decide if they like it or not. The battlefield is mostly comprised of roads, forests, mountains, lakes, or oceans in some cases, and most monsters have a certain terrain where they excel. If you're smart and understand tactics pretty well, these battles will go much faster, but even if you don't get into tactics you can still just smash into enemies head on and enjoy the game just as much. After each battle you get bonus experience, if you are the victor. If you lose, you will retreat to your nearest castle, and if this is your last castle to fall it's game over. After battles you're given the chance to reposition knights to other castles, quest knights for new items (or new knights in some cases), summon new monsters, and promote units. After each country falls, some knights actually come to you for work, which can be awesome if the knights are beefed up during battles. The only way to win this game is to defeat all the other warring nations and restore the peace, Yeah cliche but this game does have a pretty decent story. I play it all the time and I'm still finding out new things about it.

Visuals
Ok ok ok...I know this game looks like a piece o' crap, especially during the awesome 3D scenes. But the gameplay is where you have to focus. I mean, this is a heavy hitter full of potential and the visuals are just one of the few downfalls it actually has. You will notice that the terrain on the ground is actually pretty nice and you will even start to memorize certain areas of battle and can't wait to fight on certain grounds.

Sound
With a decent soundtrack for its time you will actually like some of the music in this game, with different songs for each nation it tends to mix it up a little bit and sets a different mood for each country. Not a whole lot of sound effects for battles, but just enough to not make you wonder where the sound guy lives so you can ship him a pipe bomb.

Controls
The controls can be a bit tricky at first, wondering what to press and how to navigate, BUT HANG IN THERE FOR YOUR OWN SAKE!!!! This game is worth it.

Overall
Buy this game if you can afford the price tag, but if you can't, then just forget you read this review because it would keep me up at night knowing that I missed out on a great game. So if you can get past the visuals and the confusing controls and gameplay then this game is astounding. If you can't this game is horrible. Its just the way this game was made. But trust in Atlus is all I'm trying to say. They rarely ever let me down when it comes to strategy.