A quick Kirby game to pass the time, but nothing to sneeze over. 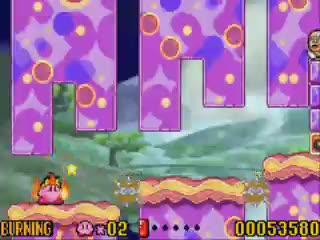 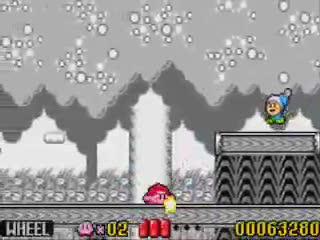 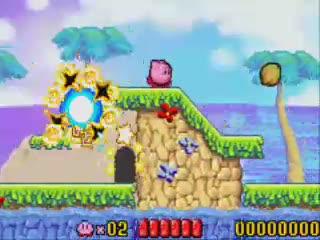 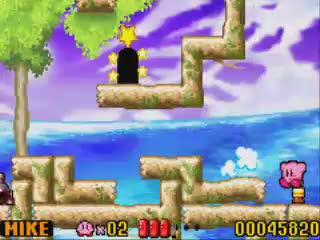 In the beginning there was an anime. This anime, despite mixed reviews, became a cult hit that contained characters that managed to become memorable in our minds. That anime ended up being a tie-in to the recent Kirby games that came out after that. This game is the debut, not only for the "anime-era," but also for the Game Boy Advance.

The story goes that Kirby took a catnap one day but realized he couln't dream. Nobody could dream! Kirby looks into the situation and finds that Dedede's taking a swim in the Fountain of Dreams. To make matters worse, the old bird broke the Star Rod into pieces and sent the parts to his goons. Kirby naturally decides to embark on a journey to find the pieces and restore dreams to Dream Land. Sound familiar? This may interest you to know that this is a remake of Kirby's Adventure for the NES. Nintendo and HAL decided to "test the waters" to see if was good enough. They did rather decent.

The gameplay is rather simple: Go from A to B without losing all your lives and health. Not to mention there's finding secrets along the way. As with other Kirby games, Kirby can inhale enemies, spit them out, and copy their abilities. You can only do one technique per ability, so no fancy moves here. You lose your ability when you either discard it or get hit by a hostile object. On a side note, you can have three of your buddies play on the same adventure with you, provided that you have the proper equipment.

The graphics look rather smooth for a GBA game - the almost one-up the graphics of Kirby Super Star. This game almost looks like it was modeled after the SNES game. Simplistic, yet nice! Although this may be eye candy, the layout of the land doesn't provide much, especially to Kirby's Adventure aficionados.

I have one big axe to grind against this game, and that's the music. I'm not saying that the music itself is bad, but I don't like the quality of the music. Either somebody at HAL decided to have a viewpoint to keep it "simple and clean" or they forgot to turn up the volume. This area is one spot that is praised in this game. I mean no offense, but I believe that those who praised that area must have forgotten the music of Kirby Super Star, Kirby's Dream Land 3, and Kirby 64, or never have played or even heard of the mentioned three games. The music sounds better in Kirby's Adventure than in this game. The little yelps Kirby makes are amusing, but offer very little comfort in the sound department.

A promising start to the anime-era Kirby games, this game may be a cater to the longtime Kirby fans. The fun may last for a little while, yet the music and the fact that it's a remake may fizzle out the fun. A cute little game, just flawed, yet enjoyable.
Review Page Hits: 2 today (468 total)
mediahook