A very solid WWII Real Time Strategy game that is overall, a stunning and lasting experience 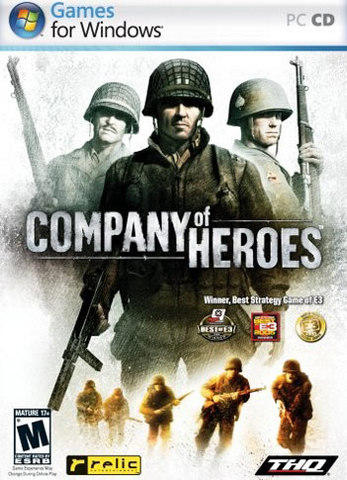 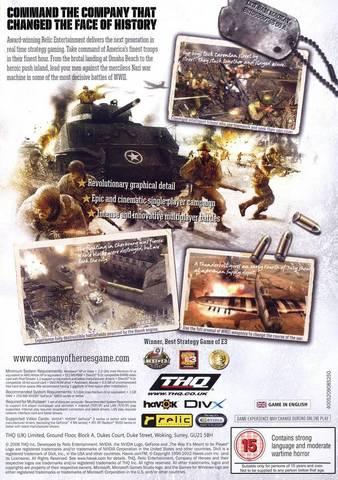 Sitting on the cliffs of the famed Point Du Hoc my MG42 crew scours the beach below for enemies while my pioneers begin construction of a bunker which will serve as an aid station for wounded men. Back at base Grenadiers are being fitted with Panzershrecks and my Panzer Command churns out the mighty Panther tank all amidst an eerie peacefulness on the shores of Western France. Out of the mist I hear the MG42 rip through the quiet air as enemy rifleman squads rush toward my position supported by an M8 Greyhound. The MG's keep the enemies pinned while my grenadiers blow the M8 sky high but just then an enemy sniper puts a bullet between the eyes of the guy on my MG42. Stunned as enemy infantry pour into my defensive lines I watch in horror as my Panther tank gets ripped apart by sticky bombs and directed howitzer fire. As I click the retreat button and watch my men come back to base I start to prepare for the next of many more skirmishes.

This is Company of Heroes.

As daunting as the concept of Real Time Strategy games may seem, with Company of Heroes you just can't go wrong. Having played games like the Age of Empires, Red Alert, and Starcraft series, I can tell you that yes, learning curves can be a real drag with these games sometimes. But for CoH (Company of Heroes from now on) you can either fight head on with a wide array of weaponry that isn't very hard to use or use things like smoke mortar shells and scout cars that have more advanced tactical features to effectively fight and grab resources from your enemy.

This brings us to the resourcing and territory system . With Red Alert their was the classic Ore Truck and Ore Refinery. With AoE you had villagers gather many different resources. CoH is like both combined and then simplfied. In CoH you need to take territory to gain resources. No villagers, no ore trucks. There are three main types of resources: Manpower, Munitions, and Fuel. While manpower can be gained by capping certain points and gaining more territory their is a steady supply from your HQ. The main ones to focus on are Munitions and Fuel. Munitions will let you purchase weapon upgrades for certain units like the Panzershreck and the MP40 while fuel is essential for putting out tanks and other vehicles. Each territory is a certain sector (marked for the resource it provides) that must be captured by standing next to it's flag for about 15-20 seconds. As you gain these territories you gain the very valuable resources. Let me make a quick point, you will almost never have a surplus of resources in this game. This is such an important part of the game that you must learn to work in harmony with it and with micro management of battles. The amount and reinforcements of units you can deploy on the battlefield all depend on having a stable supply line.

And so that brings us to the battles. You will love the fun in trying to outwit your opponent, watching him run in to your defensive line (or the proverbial meat grinder as I like to call it), and countering his attacks with something up your own sleeve, the system that CoH uses will keep everything simple and easy. CoH uses the principle of cover as the driving force in a battle. There's three types: Light Cover, Heavy Cover, and Garrisons in buildings. And utilizing cover couldn't be easier. Just select a unit and as you scroll for a spot to move you will see yellow and green dots. These are the spots in which soldiers in that squad will stand with yellow dots being light cover and green being heavy cover. Still not happy with a position? Just hold the right mouse button and drag where you want the unit to face. Presto! a squad facing the enemy in heavy cover all in under a second. Vehicles are easy to manuver as well. The great thing in CoH's battles is being able to counter a superior enemy emplacement. It's a vicious cycle and when it ends the one who is in control usually wins the skirmish. it's like a giant food chain. For instance if i'm being pinned by an MG I can have a sniper take it out, but then an enemy bike or jeep can hunt down my sniper. Still, that jeep or bike can't stand up to the power of a Puma armored car. Yet that puma can be easily slayed by a mighty Sherman tank. Countering enemy units and Countering Counter-Attacks (hehe) is essential to winning the battle. One last thing that you will love is the doctrine system. It is a certain set of upgrades you pick at the games start that tailor to specific types of units or attacks. You get these upgrades as you fight in combat and build structures. For instance you can pick the infantry doctrine for the Americans which gives you things like rangers (6 men with bazookas and SMG's) and howitzers you can build on map. Other doctrines like Armor and Airbourne can be selected as well.

I won't really go into multiplayer very much but CoH utilizes relic online which is much like steam. All the expansions are added into the system by product key and gives you access to certain campaigns and featues (more on that at the end of the review). There are friends lists, chat rooms, lobbies, private messages, and matchmaking all in one sleek package that requires no extra programs or loading.

So when all is said and done CoH just has that flare that can really draw you into game that happens to be an RTS no less. Should you buy this game? YES. YES. YES. I don't care if you like Real Time Strategy or not. You will find yourself playing this game for at least a little while. Even though it may not come easy, stick with it and you will be very happy with the outcome.

Let me also say that I highly recommend the Opposing Front's expansion because the two new armies are awesome. If you're looking to jump right into multiplayer action get the Tales of Valor Expansion. You get all the features of the first two games (CoH and CoH:OF) without the single player campaigns. This includes armies, weapons, everything. Not half bad at all considering single player isn't even close to the whole CoH experience.
Review Page Hits: 0 today (178 total)
mediahook