Perfect game for Star Wars fans but you'll enjoy it a lot even if you aren't one!!!! 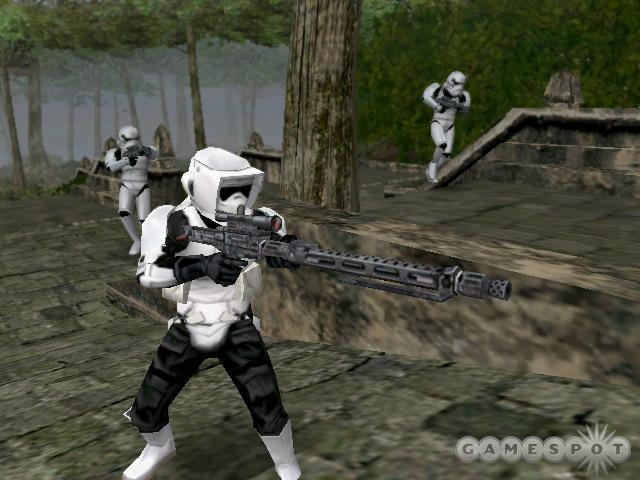 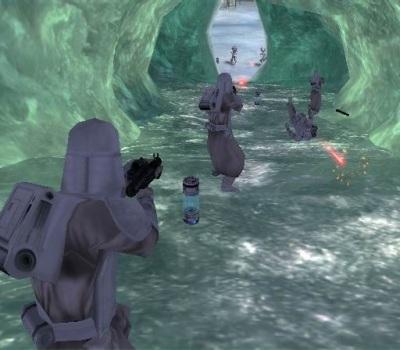 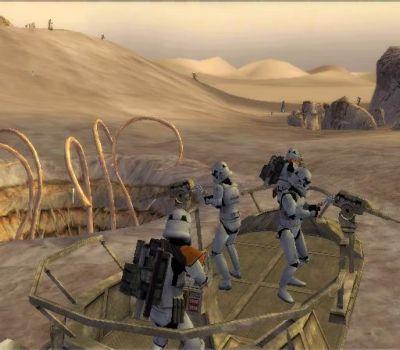 Trying to rate a 5 year old game can be a challenge. One may be biased because of all the high end, current-gen games on the market now. Problem is that many games nowadays don't have the best single-player campaigns and it can really be boring playing by yourself. Not on Star Wars Battlefront!! You'll never be bored of any of the maps or the first-player storyline as you will find yourself playing this addictive game over and over again! From all the weapons, to all the vehicles and maps, you'll be finding yourself coming back to your PS2 time and time again.

When you first start playing Star Wars Battlefront you'll realize it has similarities and differences to other First Person Shooters (or Third Person Shooters if you have that option turned on at the options menu) that you have played. All battles start out with each side having a certain number of reinforcements (usually between 150 and 250 but you can set it yourself). There are two ways you can win a battle. The first way is to capture all of your opponents "command posts." This can be a very tedious task because a command post is also a respawn point for your opponents forces, but it is doable. The second way, and the way most battles will end, is you running down your opponents forces to zero.

Inside this game there are 4 different factions you can play as. The Empire, Rebels, Republic, and the Trade Federation. There are usually five different types of foot soldiers to choose from when you are on the battlefront. They are: Soldier, Heavy Weapons, Engineer/Pilot, Sniper, Special OPS. The Soldier is the most evened out class in this game and is best equipped for frontal assaults. They are equipped with a heavy duty Blaster Rifle, Thermal Detonators, Concussion Grenades, and a low-powered blaster pistol. The Heavy Weapons class is best for taking out large groups of enemies and/or vehicles. They are equipped with a Rocket Launcher, which is effective against vehicles and enemies and is a favorite online. The Engineer/Pilot class is best designed for fixing/repairing tanks and health/ammunition droids. Their equipment varies from group to group. Droid class gets a Radiation Launcher, and the standard for all Engineers/Pilots Fusion cutter and Health packs. The Rebel Pilot gets a Shotgun. The Clone Pilot gets a Bolt Caster. The Imperial pilot gets a Grenade Launcher. The Sniper classes are the same for all types and are most effective from high points to pick off soldiers. The Sniper class gets a high powered Sniper Rifle and a Recon Droid that can be used to scout and call in an air assault! The special ops are special for all 4 factions. For the Empire they get a Dark Trooper who carries a Shotgun and a Jump-pack that can be used to travel around the battlefront at incredible speeds. The Rebel faction gets a Wookie Warrior with a Bow-caster, Grenade Launcher, and a devastating time bomb. The Republic gets the Jet Trooper who is equipped with an EMP Launcher and a Jet Pack that can be used to get around the Battlefront easily and get to super high points, and a Commando Pistol. The Trade Federation gets a DroidEka which has a shield and a very high-powered blaster built into it.

This game is unique in that every level has certain vehicles that are available for use. Within the 16 maps available inside Battlefront, which are spread out over 10 different planets from the Star Wars universe, most have at least 1 vehicle of some kind. All vehicles are usually specially adapted to the certain terrain of the map. There are tons of vehicles to be used on the battlefront. Another neat feature is that you are able to steal your opponents vehicles if you are able to get to one of their command posts without being annihilated. Some levels even have space vehicles that you can fly around the levels picking off foot soldiers with high powered energy torpedoes and blaster cannons. Turrets are also available in the game to take out troops or vehicles.

The online gameplay for Star Wars Battlefront is still as fun as ever. Now remember, this isn't XBL we're talking about, it's all free so it's not the best online multiplayer you're gonna find, but it isn't half bad. It supports headsets which is a plus. A few things make the online a little crappy. First of all, the online AI are stupid as crap. They usually just stand there and take 5 shots before even retaliating. The second thing is that the servers aren't very high powered. This means that there can be some serious lagging if you don't have a superstrong connection. The third and last thing to complain about is that the graphics of online games can be very, very bad at times. Mostly because it is very pixelated and sometimes you won't even know you are being shot at or hit for that matter.


Overall here's what I think:

The graphics for first-player modes get an A-. They are beautiful and the ability to snipe someone from totally across the map is unbelievable. Graphics for online get a C for reasons given above.

The sound gets an A+. The music is your favorite Star Wars themes you love from the movies. Also the surround sound is beautiful and you will be able to hear from which direction shots are coming from and even hear the hum of a recon droid.

The gameplay gets an A+ as well. I wish there was an A++ because that is what this game deserves. You will find yourself playing it over and over again because of Lucasarts unique way they made the gameplay.

Replay Value gets an A+ also. This is one of those games that never gets old and every battle will and can be fought in a different way.

For the learning curve I give it an A. The game is very easy to get accustomed to, the controls are pretty simple and are similar to almost all PS2 shooters.

That's it and from all I have to say about this game is GO PICK IT UP!!