Being one of the best multiplayers in the gaming industry today, Super Smash Bros. Melee can hold on its own against nearly every game, multiplayer or single player. 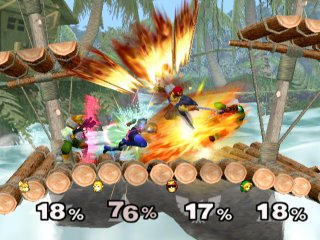 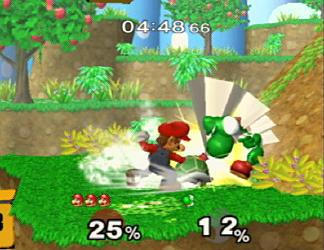 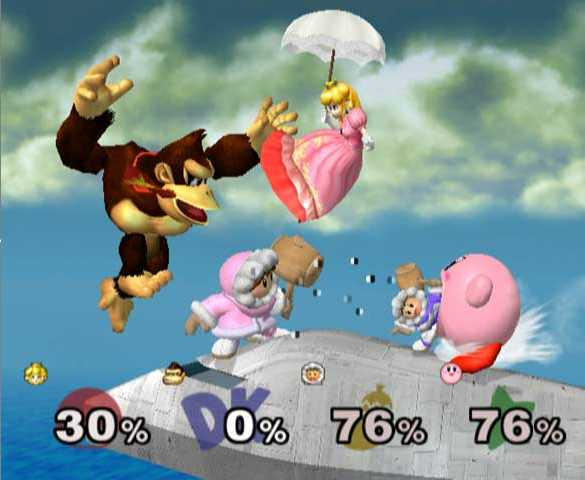 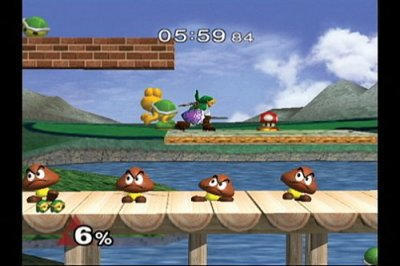 Primarily a multiplayer game, "Super Smash Bros. Melee" has a ton of variety, different Nintendo character styles, and hectic gameplay. Just imagine all your favorite Nintendo characters start walloping each other around like there is no tomorrow. You can also use well-known Nintendo items such as a Mr. Saturn (the small character in Earthbound with a gigantic nose), Super Scope, and even a fire flower. While the game is, at its best, played multiplayer, those who plan on playing single player still have tons of things to unlock: hundreds of trophies, new items at your disposal, characters, stages, and more gameplay modes.

With gorgeous character models and refreshingly pretty stages, Super Smash Bros. Melee doesn't disappoint with its graphics. Each character model is beautifully rendered, has plenty of detail, and captures the character's image with near perfection: Link's big, bulging eyes, the way the characters' eyes blink during battle, the way you can even zoom in when you pause it and see the scales on the reptilian beast, Bowser. The amount of detail each character has, especially when zoomed in, is remarkable. It's almost indescribable how each character varies.

The stages are also very detailed, almost as much as the characters. The ship in Fox's stage, Cornelia, has rust you can notice on it, and the way you can see the Arwings in the background zooming in, shooting at you; this is really a huge accomplishment. Each stage really captures the essence of the game it's depicting. The way some of the blocks in the classic Mario stage are breakable and being able to read the billboard signs in the Onett stage (famous town from the game Earthbound) is truly astonishing. One of the downfalls of the graphics is occasionally you will notice something in the background, while zoomed in, is flat and jagged. Other than that little problem with the game's look, the rest is really shocking.

Each of the stage's music really does capture the stage it's representing in a unique way. Mario has his classic Mario melody in the classic Mario stage, Fox has an orchestra playing in an upbeat style, and Onett even has the theme played in Ness' house in Earthbound. One downside to the game's sound is the way it gets repetitious after hearing it every time you play it. Other than that, the music is without flaw.

The gameplay is pretty simplistic. You basically beat your opponent lifeless, jumping around the stages. The higher your opponent's percentage goes up, the easier he is able to be knocked out of the arena. However, one thing I do love is that there are enough characters in the game that can adjust to your fighting style. Whether it is Sheik's juggling capabilities, Bowser's brute strength, or Fox's speed, there are more than enough fighting styles to suit your needs.

There are so many moves in this wonderful game, it's almost hard to keep track of all the characters. While some people like mastering one character, others like to master them all. This adds hours of replay value to Super Smash Bros. Melee. Basically, there are many different types of moves that you can do. They are broken up into two main categories: smash attacks (there are weaker attacks, and mid-strength attacks along with the smash attacks) and special attacks (varies from character to character). Weight plays a role in these hectic brawls as well. Depending on your weight, it can improve the odds of you not getting annihilated or get knocked into space (literally).

Each stage has its own gimmick. Fox's stage has Arwings that will blast their lasers at you. Ness' stage has speeding cars and frail platforms that will fall under pressure. And Kirby's stage has a tree that will blow you off the side. There are a total of 14 default characters that you will start with.

There is a story mode which is broken up into two parts (one being unlockable), which are called "Regular Match" and "Event Match." Regular Match is broken up into two sections (another is unlockable) called "Classic" and "Adventure." Of course, you are able to adjust the difficulty and the amount of lives you get from the start. With Classic, you basically just fight a series of battles and occasionally will have a mini-game in between matches. Adventure Mode is easily one of the best parts of the single player game. It's not entirely matches only. There will be stages where you run and crush goombas, or stages where you go through a maze and fight Redeads and evil Links. What would a stage be without a boss at the end? Depending in whose stage you are in, you will have to fight the character that is from the same game as the stage. Of course, after beating these, you are rewarded with a trophy.

The primarily multiplayer-based versus mode is also open to the single player experience. Up to four players can be supported in versus mode. Being able to adjust the computer control difficulty just adds to the replay value. There are several different types of melee settings to choose from. Time is when you fight until the time runs out. Coin is when you get coins from pummeling your enemy and collecting the coins that come from them. Then there is my favorite, the stock battles. After setting a lives limit, all the characters fight and whoever is the last to have some lives left wins.

Complete with many different modes, the experience is strengthened. There is giant mode which is when all the characters participating in battle are giant sized, and there is stamina mode where each character has a number, and each attack will do damage to them and take off their hit points. There is a training mode and homerun mode aside from versus mode, event match, and regular match. In training mode, you can basically take control of one character and set the artificial intelligence of the Nintendo character you are going to pummel. In Homerun mode, you basically have to use any of your characters moves, or pick up the baseball bat and hit it one good time and watch it get air. Don't have a friend to come over in the middle of the night? Play this excellent single player, because it will keep you busy for hours.

The multiplayer mode is obviously the focus of Super Smash Bros. Melee. With versus mode complete with all things mentioned above, it is hard to be disappointed. One of the best parts about the multiplayer is the tournament mode. Basically, a number of characters are set to participate and a bracket is formed with all the character's icons on it. Being able to set rules, regulations, and stages for each battle really adds a sense of customization to the game. With four characters in a melee, things can get very hectic and action-packed.

I'd definitely say Super Smash Bros. Melee gets all the credit it deserves. It's a fun in single player or multiplayer, contains excellent gameplay, and has near infinite replay value. If you haven't picked this up, even without friends, I suggest picking up this great game.

This title gets my thumbs up.