You'll probably want to avoid this shallow platformer unless you want to introduce a toddler to platforming games. 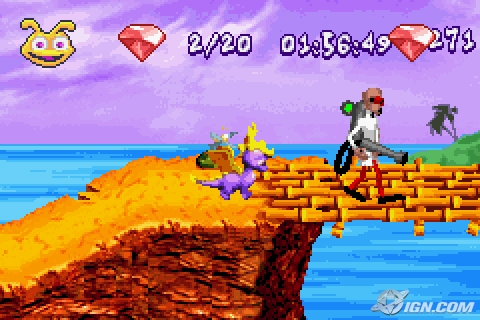 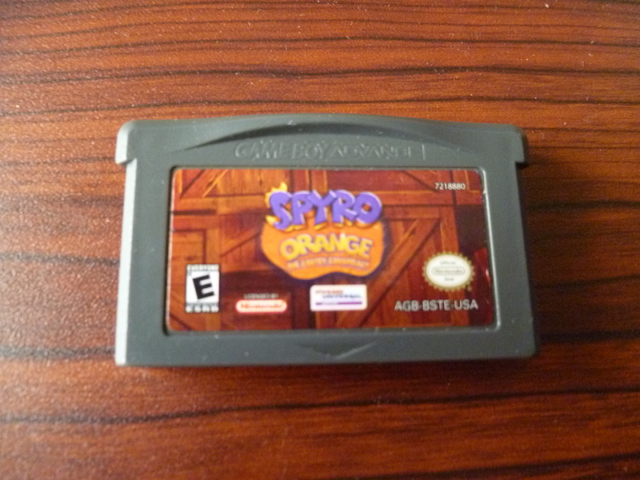 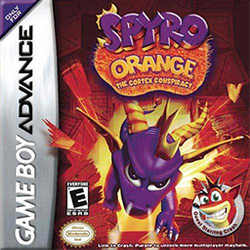 Spyro Orange is a mindless assortment of mini-games disguised as a solid platformer. The gimmick with this game is that it's a crossover with the Crash Bandicoot series of games - hence the "Orange". The companion game, Crash Purple, is a much better game - but we'll have to look at that one some other time. Spyro Orange's gameplay and levels leave much to be desired. Each level feels repetitive and the game's added mini-games are too shallow to provide any real entertainment. This overly-easy game will turn away most gamers - even casual ones. However, it would be well-suited to a child with a low attention span and low dexterity skills (due to the game's low entry level). I'm not saying this to put down anyone who enjoys the game. Little kids need games just like the rest of us and this is probably a little kid game.. that's all I mean.

The point of the game is to progress through the worlds. This is done by collecting red floating crystals to open up portals. Each portal gives you the chance to play a mini-game. Complete five mini-games to progress to the next world. The mini-games are basically rip-offs of classic games - such as Breakout/Arkanoid, Metal Storm (which is actually decent), and space shooters. If this was an arcade assortment I wouldn't mind, but because this is sold as a Spyro game I expected way more platforming than I got. I really feel the mini-games are just filler and (as mentioned) perhaps there to make the game more enjoyable for kids.

Graphically this game is pretty good for a GBA game. It sort of reminds me of Donkey Kong Country for SNES in its look. Sprites are large (great for a handheld) and animation is fluid for the most part. The game is cheery and colorful - although the palette is a bit faded at times. The landscapes are varied - ranging from ice caves, lava fields, and generic castle levels. For the most part the scenery keeps your interest, but it does seem overly generic. Spyro, despite the low resolution, seems to correctly represent a cartoon dragon (although it looks like he has on a blond wig instead of horns). The fire effects from the little guy are also done well, considering the game resolution.

Control is not exactly tight, but isn't a total pain either. Spyro feels a little floaty on the platforming sections. Of course this isn't really a problem because the game is ridiculously easy. Spyro can jump, hover, and breathes fire - which seems to kill most if not all opponents in one hit. Given the GBA only has two front buttons like the NES, the control scheme is simplistic and only requires minimum effort to master. Everything is nice and slow (and too easy) in the mini-games. That's the problem really: there's no real challenge to meet, no gameplay skill-set to develop. I don't enjoy constantly dying in a game and having to memorize levels, but this game is way too easy. Some re-playability was attempted by collecting cards in the game (167 of them), but this just makes the game feel more like a chore. Once you play a couple of levels, you'll basically want to put down this game and pick something else.

If you find this for a couple of bucks, you might give it a shot, but don't pay any more. This is a very mediocre game and will not keep you interested for long.
Review Page Hits: 0 today (169 total)
mediahook