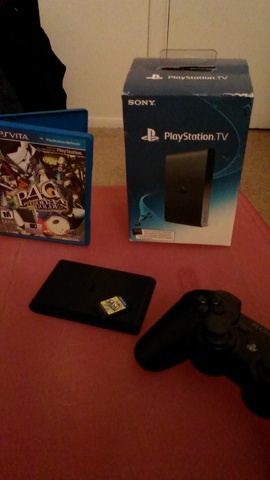 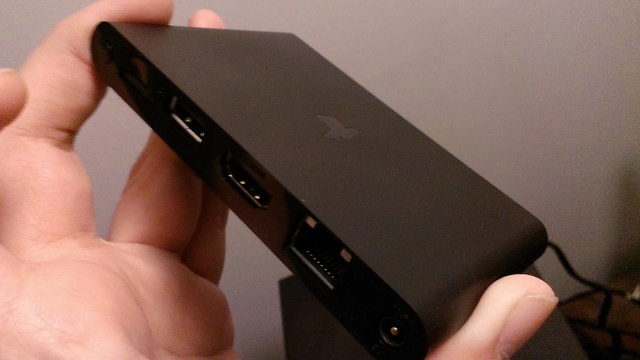 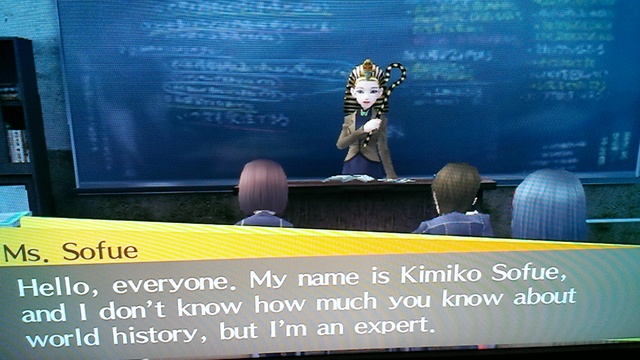 I bought the Playstation TV with the hope that it would be an acceptable PSOne Classic replacement (piggybacking off the PSN's excellent selection of downloadable titles) with the added benefit of not only being able to play Vita titles, but play them on the big screen, in effect becoming a significantly smaller PS3 with a nice spread of exclusive titles that couldn't be played on the PS3. In that aspect, it succeeds somewhat, but fails too often.

Aesthetically, it's very pleasing (before you plug it in) and compact. It's a little black box that's smaller than... a bread box, a wireless PS3 controller, my cellphone, my wallet, and a retail Vita game case. Vita game cases are very, very small. Pray this thing never falls in the back of a dark media cabinet. The system, with the HDMI and power cords sticking out of it, throws the console off-balance, and upsets the visual style. In fact, it's likely in many set-ups the cords will actually be too heavy for the console to sit upright, instead tipping gently upward as if looking at an interesting pattern on your ceiling. You need to give the cords some room to breathe.

The system's limited to 720p, I'm assuming due to the source console. It's not ugly, but it's definitely ..."big"; the UI doesn't scale well on a 32'' HDTV and it looks chunky when compared to the Playstation 3 user interface. It's got big buttons that aren't nearly as intuitive to navigate with a wireless controller as they would be on the touch-screen Vita counterpart. The online shop doesn't fare much better, as the limited purchasing options and navigation lend themselves much more to the limited constraints of a four-inch screen than a living-room TV set. The visual presentation always feels off, something you're likely to be more aware of if you decide to get a PSTV because you don't like how portable units "work" and feel. Slapping a PS3 wireless controller on top of it doesn't improve that, and doesn't do the UI any favors.

Compatibility seems to be the system's primary sin; one would think when releasing hardware presumably to transfer the mobile market games to the console crowd, this is an important step to get right. It stumbles significantly.

The Vita compatibility list on the website is woefully outdated, so you'll be doing some guesswork as to which titles play and which don't and, if a title doesn't play, if it ever gets patched to be compatible. There's a good list up on Wikipedia that gets updated often, but one has to wonder why the official site list isn't kept up properly. This is further complicated by the fact that, when you walk into Gamestop's Vita section and browse cases, there are a few games with "Playstation TV" stickers that are, in fact, lying to you. Ys: Memories of Celceta is not Playstation TV-compatible, thank you very much. Maybe a case was re-used with other artwork and the sticker was accidentally left on. Maybe absolutely nobody knows what's going on with the system. If I can't trust one display case, I can't trust any.

The Ys game's an interesting case, actually; in Japan, the game works on the Playstation TV (albeit with a few bugs) but for some reason it never hit the US compatibility list. This case isn't unique. This may be some sort of licensing issue where you have to re-certify a game every time you release it in another territory, but if Falcom isn't willing to throw XSEED a bone and get it re-certified, that leaves a potential Vita game sale to a PSTV owner a no-go. It certainly points to a flaw in the system if it's this difficult to get a game "compatible" with it.

I tested out Ragnarok Odyssey Ace and Persona 4 Golden. P4G looks fine on the Playstation TV, but again, due to the resolution restraints, it looks more "bulky" in comparison. Jaggies are present on polygon models, though 2D artwork, text, and borders all look fine, if not slightly "cheap" on the television; it's hard to explain. It almost looks like an indie title on the PSTV as opposed to a fully-fledged 100 hour-plus JRPG from the PS2. Cutscenes look like 720p cutscenes would on an HDTV: Acceptable, but with noticeable graphical artifacting/pixelation during motion-heavy sequences. Ragnarok Odyssey Ace suffers from the same issues; if you've played RO on the PS3, you'd be happy to be playing it on that instead. The game looks chunky when scaled up.

In general, an average TV looks stuffed with Vita games on them. However, if you've got an issue reading text on a small screen, this will definitely make you happy! It's very easy to tell what's going on, and text pops out and reads very well.

Obviously with the PSP titles, you're limited to what you can download off the store, similar to the PSP Go without the UMD drive. There are lots of compatible titles, but the two I tested with (Half-Minute Hero and Final Fantasy: Dissidia, the latter I purchased specifically to play on the Playstation TV) have a strange, murky mask shadowing the entire screen that you can't get rid of. This was much less visible on the PSP's screen, but it makes games that would otherwise look perfectly at home awkwardly out of place (even pixel-based games have some strange sort of artifacting going on). There was no option to sharpen the edges, so you're left with graphics that remind me more of a cloudy Playstation One than a Playstation 2. It's sub-optimal and jarring. The games, at least, seemed to play alright; Dissidia controls worked well on the PS3 Sixaxis controller.

The PSOne compatibility is questionable as well. There may be some sort of similar certification issue even with PSX games, as you'll find several games do not show up in the downloadable list at all, and odd ones to boot. Castlevania: Symphony of the Night is compatible, but Castlevania Chronicles (a much simpler Castlevania title) is not. Newer Capcom releases such as Mega Man X4 and X5, even Strider, are missing in action as well, but the large bulk of my PSX library downloaded without a hitch. I did have an issue with Symphony of the Night locking up with the "Fast Load" option causing the game to hang within the first seven minutes of the game. Turning it off allowed me to progress; one would think higher profile titles like that would have been tested more fully and option-breaking compatibility would have been disabled, but instead you're left to play more guessing games.

So the question becomes: Why does the Playstation TV exist? If it's to bring mobile games to a console crowd, there are a lot of holes that need to be filled with compatibility to bring it up to the level it's currently enjoying in Japan, and the games not being designed for a television does the PSTV absolutely no favors. With the lack of urgency in patching compatibility issues, if you don't see a game you want to play in the "okay" list on Wikipedia, there's no reason to expect it ever will be patched, and no reason to buy this. A large majority of the games on the Vita are ports of titles already available on the PS3, and are cheaper and play better on that anyways. When you add the cost of Vita memory cards to expand the system's storage capacity, the price of a Playstation TV comes dangerously close to the market price for a PS3 anyways, and with the system storage clocking in at a bit less than a gigabyte of usable space on boot-up, you'll be needing one of those $26 8 GB, $40 16 GB or $70 32 GB memory cards sooner than you'd like.

As a package, the Playstation TV falls short in a handful of critical areas. If you can confirm a game you absolutely need to play on the TV works with the system, that's still a tall order and a high price for a system that has fundamental flaws at its base and it's hard to recommend outside of that specific case. If you're looking for a new console platform, you should keep looking. Sony doesn't appear to be throwing its weight behind this, at least not in this territory. In the end, it's a system that enjoys none of the benefits of the Vita's portability, yet hampers itself with compatibility, presentation, and practical application. You'll be looking hard to find value in the asking price.

If you're looking to play Vita games on the TV and have no desire to go mobile, this may do if your desired games are supported. If you're looking for a cheap Vita alternative, keep in mind you're getting what you pay for. I can't help but think I would have been better off getting a Vita in the first place.
Review Page Hits: 1 today (1,456 total)
mediahook