Super Mario Sunshine is an interesting follow-up to Super Mario 64, but sadly has not passed the test of time. 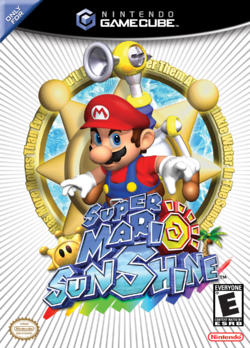 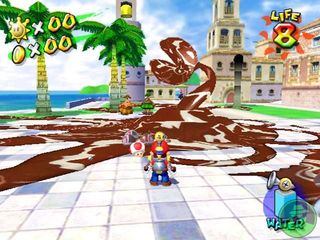 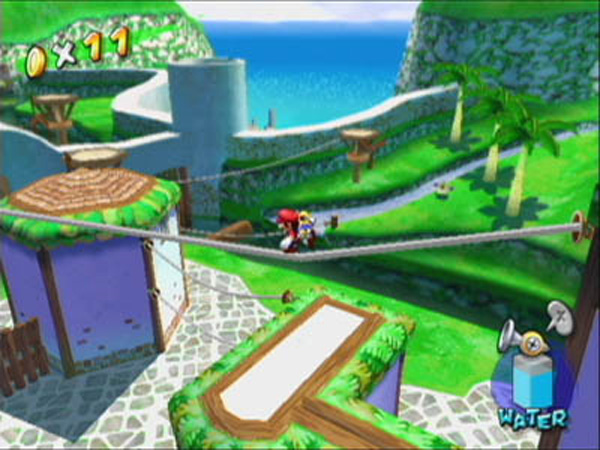 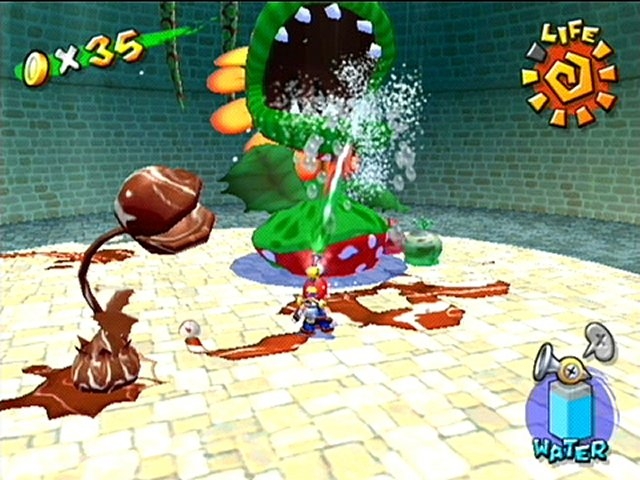 Super Mario Sunshine was released for GameCube in 2002. I did not play it for a considerable amount of time until 2017, so keep that in mind as you read this review.

Super Mario Sunshine takes place on Delfino Island, where Mario, Peach, and other characters have flown for a vacation. They quickly discover that the island is partially covered by large amounts of goop (also known as grafitti), which is a thick, slimy substance. Mario acquires F.L.U.D.D., a water-spraying contraption that he wears on his back, and begins using it to clean up the goop. Mario learns that the goop has caused the island's Shine Sprites to all flee. A mysterious Mario-like character (Shadow Mario) appears and attempts to kidnap Peach. Although Mario stops him, Shadow Mario uses a special brush to paint a rainbow M, which he escapes into. This is actually a portal to Bianco Hills, one of the various worlds in Super Mario Sunshine. Delfino Island acts as a hub (similar to the castle in Super Mario 64), and Mario must use these portals to visit each world and collect all of the missing Shine Sprites.

Super Mario Sunshine had the potential to be a solid 3D Mario game, but too many annoyances distract the player from ever truly enjoying it. Right off the bat, the controls and camera have issues. Nintendo forced inverted controls (for spraying water and looking around in first-person mode), and there's no way to change them. If you're like me and prefer non-inverted, you're going to find this very frustrating in the beginning. Controlling Mario is mostly fine, but sometimes you just can't seem to get him to do what you need him to do. This becomes a big problem when trying to navigate the levels, which I'll touch on later. There's not much to say about the camera; it's awkward and often won't get in the position you need.

The main gimmick of Super Mario Sunshine is F.L.U.D.D., a water-shooting device that Mario wears on his back. Mario can spray water to attack enemies, and also to clean up the sludge that is located throughout the levels. F.L.U.D.D. also has some special abilities, such as spraying water downward which allows Mario to hover, or shooting a strong jet of water downward which blasts Mario high into the air. When you're using it for platforming, it's pretty cool, and creates some unique/interesting platforming not found in other 3D Mario games. The rest of the time it's just an unnecessary annoyance. So much of the game requires you to stand around spraying things. Not only is this boring, it's extra annoying due to the inverted controls. Even once I got used to the inverted controls, the water just wasn't very intuitive to aim. I could have done without having to spray water at all. The worst part was one of the boss fights in the first world. If you want to have any chance at all, you have to go through the main area and clear out all of the goop before the boss fight. There's a TON of it, so it takes a while, and then if you die at the boss you have to do it all over again! Tedious sections like this distract too much from the enjoyable moments in the game.

The level design and gameplay in Super Mario Sunshine leave much to be desired. The worlds are designed in such a way that it's often not clear how you're supposed to get around. Most of the time, I felt like I "cheesed" an area, or just threw together some crazy sequence of moves to get to where I wanted to go. In these situations, I couldn't help but wonder if that was the intended route, because it never felt fluid or natural. Much of the gameplay is just dealing with these frustrating platforming sections and trying to figure out how to get where you need to go. In Mario, the difficulty should be in executing the platforming, not figuring out what you even need to do.

The level layouts are very unforgiving. Small mistakes often result in you being set back tremendously, then having to do a ton of back-tracking just to reach the place where the mistake was made. This is where the issues with controlling Mario start to become more evident. Sometimes a wall jump just wouldn't work, or Mario wouldn't grab onto a ledge like he should. If you miss a wall-jump and just have to land and try again, it's not a big deal. But if you miss a wall-jump and are punished by 3 minutes of back-tracking, it's really frustrating. Once you get to your objective, it's usually pretty fun, but getting there is such a pain that it's rarely worth it. In some sections, the Shadow Mario character steals F.L.U.D.D from you, and you then have to clear a pure platforming section. I had the most fun in these sections, although, the platforming still wasn't as fun as any you would find in either of the Super Mario Galaxy games or Super Mario 3D World.

Had I played this game back when it was new, right after Super Mario 64, I believe I would have liked it more. I can see how it would have been an interesting follow-up to Super Mario 64. But the 3D Mario games released since then have improved the genre so much that this game just doesn't hold up well today.
Review Page Hits: 2 today (1,269 total)
mediahook