Awesome Back to the Future Site

Back to the Future (DVD)

Michael J. Fox's finest. This movie stars a young Michael who travels back in time by using a 1982 DeLorean that has been converted into a time machine. 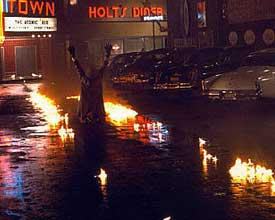 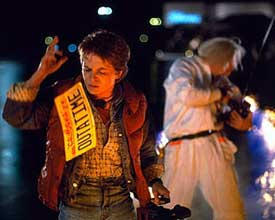 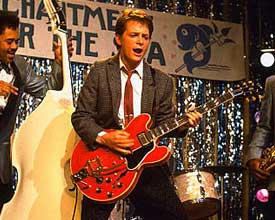 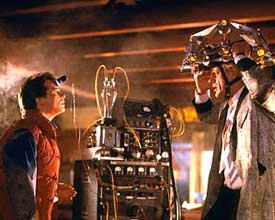 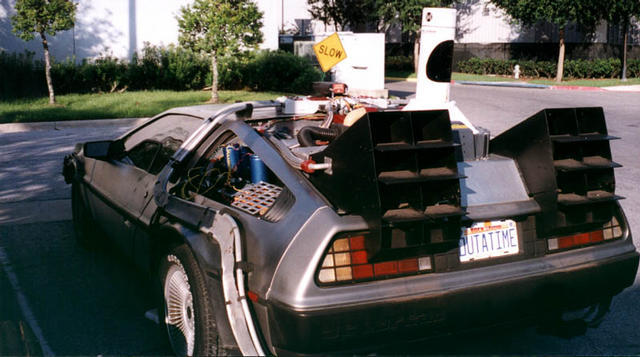 Director Robert Zemeckis deserved major respect for directing such a great movie. This movie is definitely one of the best movies to ever hit the big screen. This movie not only did something for Michael J. Fox, it gave the car manufacturer (DMC) a whole new marketing campaign as well.

This movie, directed in 1985, stars a young Michael J. Fox as the lead character and Christopher Lloyd as his whacky best friend who is a rocket scientist. It also stars Lea Thompson, Crispin Glover, Thomas F. Wilson, and Claudia Wells. Marty (Michael J. Fox) is sent back in time using a souped-up, plutonium-energized DeLorean time machine. He is on a mission to fix the past. As he encounters his parents in the 1950's he has created a new path of existence which could cause him to be erased from it permanently. With the help of his good friend DOC they journey out to rewrite history and get Marty back to 1985 where he belongs

The effects were polished up in the DVD version of course...they remastered it. But even if you watch the original one in VHS you will see that they did a nice job, especially with the delorean travelling through time. There is one part where the delorean is struck by lightning and leaves a fire-trail of skid marks which you can tell is fake. There is not a lot of special effects in this movie. If you want special effects then watch Back to the Future Part II. You will be amazed at their rendition of what the year 2015 looks like. But, come on now, it was 1985 when this film was released so you can only expect so much. Of course some of the stunts that were done were pretty good too. There is a scene where Marty is being chased and takes what looks to be a 1955 model of a wooden razor scooter (only think I could think of), only it has 4 wheels and is made out of wood. Anyways, he transforms it into a skateboard by removing the handles and skates through town while being chase by Biff in his car. Some nice stunt work was done here as they run amuck in the streets and Biff ends up hitting the crapper....literally.

The acting was really good. Everyone played their part really well. Crispin Glover was the high school geek. I couldn't get over that, but he really made the audience believe that he actually was a nerd. Michael J. Fox really shined in this movie. Even though he was really young, he played his part as though he had been acting his whole life. The only disappointment for me was Biff. I didn't like his character too much. He was lame and very dry at times. He was just a push over from the start, and just annoyed the heck out of you. I think they could have cast someone else for this part with a little more energy and charisma. I just thought that he was laid back a bit much for the character to really shine.

Steven Spielberg really pulled this off and it is a classic. Nice script work, and a nice plot made this movie worth while. It was even such a hit that they have a Back to the Future ride at Universal Studios in Florida. This movie gets an A+++ in my book. It's a classic and is definitely something you can watch over and over again, and come on, the DeLorean is featured in this movie. Who doesn't love the gull-wing doors? I can't really think of anything I would have liked to have seen in this movie. I really enjoyed it, and thought that the actors (minus Biff), the script, the plot, and the effects really made this movie a sci-fi classic. Now only if those rumors were true about a part IV