This game paved the way for many gaming systems. The 8-bit technology has really come a long way since then. 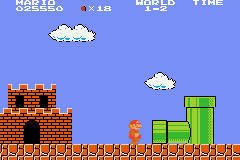 Super Mario Bros. has to be one of the best games of all time. I mean, what plumbers in their right mind could fight off a fire breathing dragon, killer turtles, and Goombas. Well, Mario and Luigi did indeed do just that. They took the whole gaming scene to the next level.

Graphics:
The graphics were good in its day and age. We had never seen graphics like this until the NES hit the scene. Although it was not 3D and all, I was amazed at how fun this game was. The graphics amazed me. They would have amazed you too if you were used to playing Pong.

This game is your basic side scroller and one of the pioneers of the video game world. Although Mario is a bit choppy and if you look closely you can see the squares that compile this guy into a cartoon character.

Sounds:
No one can ever forget the soundtrack to Super Mario Bros. There weren't many different tracks that went with this game. There were the fun themes for the entertaining levels and more dramatic tracks for the boss levels. But I'm sure any true gamer can hum the tune to the original Super Mario Bros.

Game Play:
Anybody can play this game. I'm sure a 3-year-old could pick up the controller and play along. You have the directional pad and A and B, that's it. So it's easy to play. The key to the game is to make it through all eight levels and defeat the evil Bowser, while dodging Goombas, Koopas, Flying Fish, and a spiked-shell-hurling Lakitu. Each level has four sub-levels (i.e., 1-1, 1-2, 1-3, and 1-4). Set out on an epic journey and try to beat your way through all 8 levels. You will find yourself jumping on top of owl heads, turtle heads, guys who float around in the air in a cloud while throwing spiked shells at you, bullet shaped tough guys who are fired from cannons, flying fish, and hammer wielding hammer brothers. The key is not to get touched or hit by any of these guys or objects. You also can beef up your Mario by obtaining a mushroom, which allows you to grow twice his size so when you do get hit you wont die. You will just shrink back to little-mario. You can also turn into the fire-wielding fire-power Mario by picking up a fire-flower found in the item boxes. Theseitem boxes are marked with ? marks. You stand underneath of them and hit them to find one of the following objects. A 1-up, mushroom, fire-flower or a coin box. Collect 100 coins and you will receive an extra man. At the end of each level you jump onto the castle pole and slide down it for extra points. The higher you jump on the pole the higher your score will be. Your ultimate goal is to defeat the evil Bowser and rescue Princess Peach from his evil clutches. If you can handle this task, the Mushroom Kingdom shall be yours.

Extras:
This game paved the way for Mario games to come. First big game to hit a platform period. You could buy the NES and get this game with the system. Most of you all probably bought the package and got the bonus Duck Hunt that came on the same cart. as Super Mario Bros. This game pitted you against flying ducks and UFO's and you had to use a zapper/lightgun to shoot them. Kind of like a hunting game to see who could get the most kills each round. Very entertaining game and a great bonus to the Mario cart.

Overall:
This game gets an A+ in my book.....there is always room for Mario Bros.
Review Page Hits: 0 today (1,233 total)
mediahook