WarioWare: Touched! is one of the best, craziest DS games out. A MUST for any car ride. 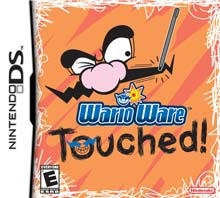 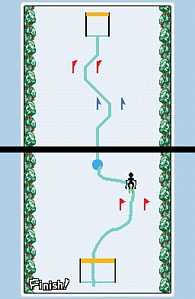 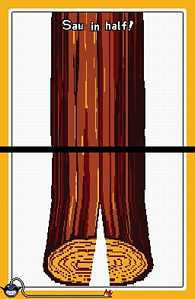 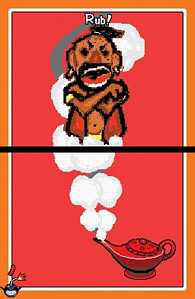 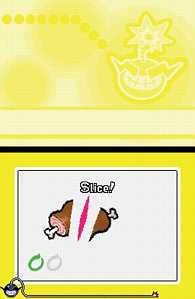 Let's get one thing out in the open first. WarioWare: Touched! has 180 "microgames" which are about 2-5 second mini-games in a randomized order. The order IS randomized, so it's different every time. Not only that, but as you progress, it speeds up. There are also boss levels which typically take longer than the normal microgame. Microgames usually are crazy games where you have to unroll toilet paper, pee on a fire to put it out, slice fruit, snip snot, throw ninja stars, and even blow on the DS to fog up the screen. It has a lot of freaky-weird stuff such as this. I won't spoil any more of them for you though. That about sums up the gameplay.

There is the main screen where you will touch the character whose game you wish to play. Each character will have a different gimmick to their microgames. Wario has tapping, that afro-guy Jimmy has you rubbing, there's a microphone rocking robot, plus many more in addition to those few.. One lame part about starting a new character's games is that you can't skip the cutscenes (although I figured out a way to do it -- just cut the game off during the cutscene and cut it back on), but that's not a big problem. WarioWare: Touched! is the PERFECT road trip game. You can complete it fairly quickly, though it will still last a while. Suck at WarioWare? Worry not. You can practice the games you suck at in the album mode, where microgames are saved.

One of my favorite additions is the "Toy Room." Upon completing a certain amount of microgames, or finishing a character's story, you'll unlock a toy (which vary in lameness). A few are just really simple and pointless such as blowing on a fan to make it go. Others are even more crazy such as juggling, scribbling, and even Wario Paint (guess what that ripped off). Cool addition to the series.

The graphics aren't the best, but hey, WarioWare has never been about serious graphics, has it? The audio is...well...weird.. It's a bit hard to describe, so I'll leave it up to you to decide for yourself.

WarioWare: Touched! is a fun GREAT game. Some may see it as short, but it's the type of game you can pick up at any time and jam at it. Best DS game out as of now. A MUST-HAVE for any DS owner.