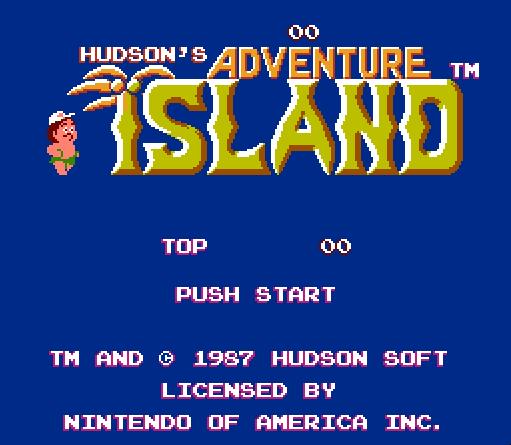 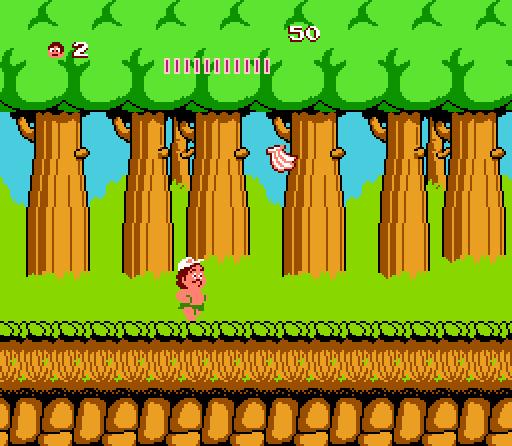 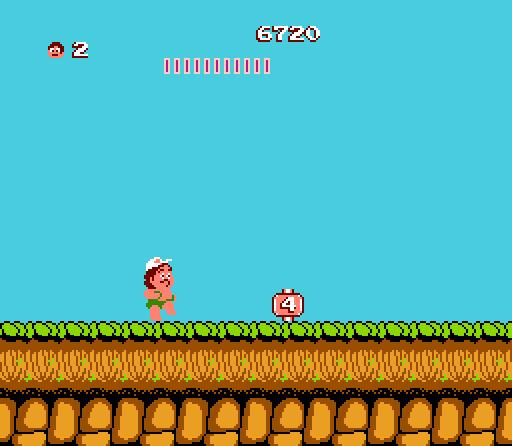 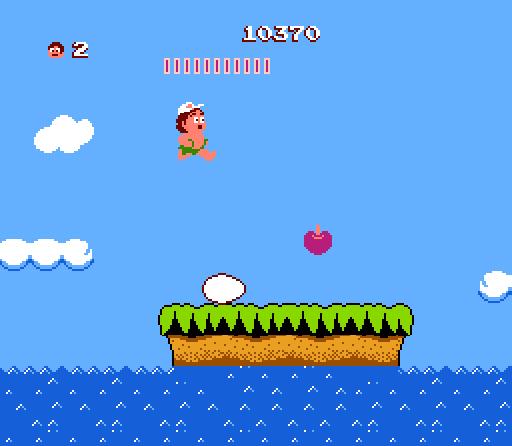 For those of you who are old enough to remember, there was once a game called Wonder Boy. Sega made a decent hit out of this game but ran into some problems when Escape, the developer of the game, wanted to localize the game for the NES. The two companies had to split, with Sega having the characters, and Escape having the scenario. What was Escape to do? Join up with Hudson and come up with a new character. Enter Master Higgins, a pudgy dude you might find in New York, dressed with a hula skirt and a white (sometimes red) hat with the Hudson Bee on it. Higgins is known in Japan as Takahashi Meijin, named after one of the developers who claims he can tap a button at 16 times a second!

Some idiot witch doctor kidnapped Higgins' girlfriend. Whoop-dee-do. What else is new? And take a wild guess who gonna fetch her. What you do is simple: Go from A to B without losing all your lives. As for the controls, you move left or right, hop with the A button, and run and toss items with the B button (which, for some strange reason, allows you to jump higher and farther). Along the way, you'll encounter enemies, obstacles (such as fire, rocks, boulders, and tricky platforms), eggs, and fruit to keep the bar near the top of the screen from getting depleted. What's in the eggs may be anyone's guess; it could be an enemy-killing axe, fireballs that can destroy things that an axe can't, a skateboard which allows you to sustain one hit, a honey girl who gives you temporary invincibility, energy-restoring milk, an occasional pot that doubles your total bar score, or an eggplant which depletes said bar faster than usual. You lose a life if you get hit by an enemy or other hazardous obstacles, fall into a pit, or letting the bar go empty. All this will really make your palms sweat; the only defense you have is an axe or fireball, and the skateboard can't stop or go reverse, making platform-hopping much harder. Adventure Island is not at all forgiving! Even a hardcore gamer will find this game very challenging, and the enemies and traps are designed for sheer annoyance! One wrong move and it's the pits for you and probably the trashcan for your controller after you've smashed it. It's that hard! And let's just say that the ending is not worth all the pain.

Compared to Wonder Boy, the graphics are goofier and more NES-like. My favorite animation is when Higgins runs like his butt's on fire and is too stupid to care! Of course, you got the forests, little islands, caves, dark forests, and all the enemies, too! But since this is an early platforming game, you'll be seeing a lot of the same things. There's not that much variety in the little rascals that you're dodging, and the levels can get a little bland after a while. Even the bosses (yeah, bosses!) are basically the same dude with different heads! How uncreative can you get?

The sounds and tunes fit the game very well, like the game's expecting you to do the Goofy Holler after you fall into a pit. The music has a daffy and islandish feel to it, although, like the graphics, can get bland after playing this game for a while. There's even a splash effect after Higgins falls into the ocean!

The gamer who can beat this game easily deserves to be saluted! It's very hard, and this game is probably NOT a good game to use to introduce someone to the NES. Despite the daffy music and crazy characters, this game will most likely end up in the bargain bin. The sequels are more forgiving and deserve a try. This game is only for those who are experts or those who like getting their head handed to them. This game is an early example of how rough the NES can get!
Review Page Hits: 0 today (644 total)
mediahook