The greatest 2D Castlevania ever. This game has stunning graphics for its time. The music is excellent with many remade music tracks from classic Castlevania games like "Vampire Killer". Only released on the Turbo CD in Japan. 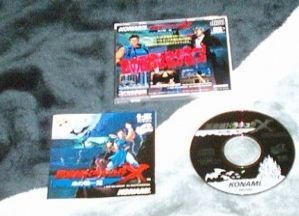 Almost every gamer at some point in his life has seen, heard of, or played a Castlevania game. Sadly, this is one of the only Castlevania games that is not well known. Only released on the Turbo CD in Japan back in the early 90's, this Super CD game boasted great graphics and music for its time, not to mention one of the only great side scrolling action games on the Turbo CD. In this game, you take the role of Richter Belmont. The story is all in Japanese, but what I can get from the cutscenes is that Richter's town was attacked by Dracula and four maidens from his town were kidnapped. Speaking of the cutscenes, they are very nicely drawn in an anime style and the voice actors are great. You can search online and find translations of the script if you'd like, though.

There are 8 stages to play before reaching Dracula, but most levels branch off into two paths giving you nearly 15 total stages to play. The gameplay is very good for a two button controller, simple but with some depth. The game plays out like any classic Castlevania game, as you wield a whip and a sub-weapon of your choice. But, this game introduced the item crash to the Castlevania series, which is a special sub-weapon attack. Another addition to the game is the backflip, which helps you to dodge enemy attacks. The gameplay, in general, is easy. Once you figure out the bosses patterns, the game will become very easy. Some fans of the series will be turned off by this, as the older Castlevania games are very difficult. Regardless of this, the game is still very fun.

One thing that really makes this a great game, outside of the gameplay, is the music. Most of the tracks are classic Castlevania songs remade with CD quality sound. I found myself playing certain stages just to hear the music! Now you might be thinking, "Why would you play a stage for the music? What about the gameplay!?" To me, music can make or break a game. But in the case of a game that is already great without the music, it only makes it that much better. In this case, the music truly helps make this Castlevania experience a masterpiece. Some of the tracks can be a bit annoying, but overall I found the music to be spectacular.

There is only one major drawback to this game, and that is the price tag. If you are lucky, you'll be able to find this game for as low as $90, but look to spend more like $120 for it. Another problem is the system that it is on. The game was released on the Turbo CD, which requires you to use a Super System Card 3.0 to play the game. Together, it would run you about $150. Your other option is to buy a Turbo Duo, which has more ram than the Turbo CD, allowing you to play any Super CD game without the Super System Card. Is the game worth the money? It really depends on how big of a fan you are. Personally, I love the game and think it was worth every penny, but I'd only recommend it to hardcore fans. It's a shame that this classic game was released only in Japan on a system that failed in America.
Review Page Hits: 1 today (396 total)
mediahook