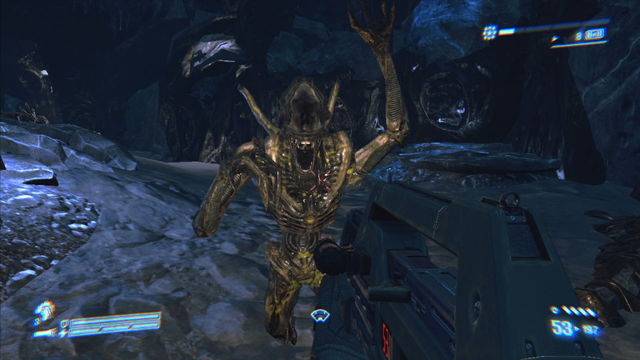 After following the development of Aliens: Colonial Marines for years, it was extremely disheartening to see the final product. It was found that the demos, images and videos represented a far superior and gorgeous product. What was actually delivered was a travesty and a prime example of a bait and switch. A:CM launched with prolific bugs, missing content and a lot of disappointed Aliens fans.

Graphically, A:CM looks like an almost finished console shooter from 2008. The screen tearing is extremely noticeable throughout the entire game and the only thing consistent about the textures is they always fail to load properly until you are almost on top of them. Design wise, there is a lot to like though. The new Colonial Marine weapons look like they would have been imagined by the original design team for the film. They have a nice functional and powerful appearance. The rest of the gear is mostly authentic to the movies and well done, sans the M41-A pulse rifle, which will annoy purists greatly. The locations from the film are fairly well done also, minus a few differences from the films such as layout, orientation and scale.

The sound department did an excellent job with the score and most of the effects. Placement of the original James Horner pieces are appropriate and can really get your pulse racing at times. A pleasant surprise is the new music created for the game. They are well orchestrated and fit seamlessly with the original movie soundtrack. The sound effects do a great job of setting the atmosphere with the constant tick of the motion tracker, straining steel and loud bursts of gunfire. The aliens don't sound particularly threatening, and some of the sounds don't really fit with the movies. The alien hiss is a let down.

Control wise, everything fits really well and aiming is easy(the PS3 version, not so much). If the weapons didn't seem to spray fire so wildly even when firing single shots, it would have made a big improvement to the game. Aliens in multiplayer are a little less precise and you can find yourself turned around the wrong way when climbing walls and ceilings. During the campaign, there is a boss battle where the player gets to drive the iconic powerloader, but the controls are unforgivably clunky and the attacks have terrible hit detection.

Multiplayer and Bug Hunt are the saving grace of this game for Aliens fans. Team Deathmatch, Survivor, Escape and Extermination are the four original modes, while Bug Hunt was added as DLC. Team Deathmatch is pretty self explanatory, but forces players to play one round as a marine, and one as an alien. Survivor had some interesting elements where a team of aliens try to eliminate the marines as they either dig in at a defensible position by welding doors and strategically placing sentry guns. Escape was a lot of fun as a marine team had to progress through a level by activating certain levers and switches as they make their way to an evacuation point. Extermination had a team of aliens defending their egg caches from the marines. Points are scored by standing inside a control zone until the eggs were destroyed. Bug Hunt is only playable as marines, but puts you in some well designed maps that require you to progress through them like Escape, but ends with you setting up a defensive position and trying to survive 30 waves of aliens and Wey-Yu mercenaries. Each wave of enemies becomes more powerful and harder to kill than the previous one, making for some epic battles. Money is earned for kills and allows marines to buy back in on death, get more ammunition, heal and pick up powerful special weapons such as the Smart Gun or Sentry Gun. Unfortunately, the modes don't allow for any customization of game options, and as of summer of 2014, only Team Deathmatch games are still active. The queues for the other modes never fill up.

There are three Alien classes. The Soldier is a melee heavy class with the ability to withstand a lot of punishment. The Lurker is best played by using it's extremely long distance and lightning quick Aimed Leap ability in order to confuse and get behind marines and land powerful instant kills. The Spitter is a fun ranged class that hurls deadly acid spit across the map. As you level up your aliens, you unlock new abilities and traits allowing players to customize the classes. For instance, one can upgrade their Spitter into a viable melee class by increasing it's movement speed and giving it the ability to spray instant kill acid in an area of effect attack when killed. All of the aliens have instant kill fatality attacks that are insanely brutal and well animated. They are balanced out by requiring a three second wind up that is accomplished by holding down the fatality button, which gives the marine a chance to dodge it and land a fatal burst of gunfire.

Overall, Aliens: Colonial Marines failed for trying to be a Call of Duty clone with an Aliens skin. Had Gearbox put the amount of polish into A:CM as Activision does with CoD, they could have been onto something exceptional. There are moments where a really good game shine through, but are quickly crushed under the weight of a too short development time, bad decisions, poor performance and corridors full of targets that run blindly into your gunfire.
Review Page Hits: 0 today (638 total)
mediahook