Five ordinary kids are given the power to change into animals in order to fight an alien race taking over Earth. 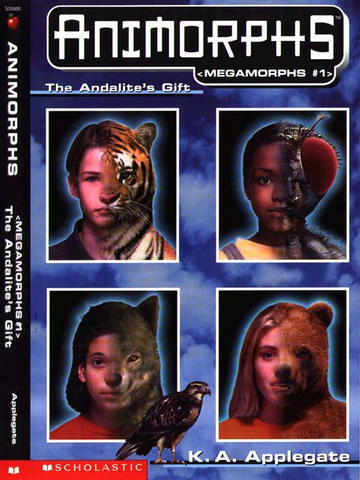 This is by far one of the best book series I have ever read. This series is sure to keep your attention. I would recommend it to any parent for their children.

It all begins when five teenagers are walking home late at night. As they take a shortcut through an adandoned construction site, a spaceship crashes and they meet an Andalite prince who tells them Earth is being invaded. The invaders are a race of parasitic slugs called Yeerks that crawl into human minds and control their every action. The teenagers are then given the power to change into any animal they touch. But every gift has it's curse... never stay in morph longer than two hours or you stay forever. Throughout their many adventures, the Animorphs discover a young alien cadet who is the brother of the one that gave them their powers. Together, they combat the evil Yeerk overlord Visser Three, who is the only Yeerk to ever gain an Andalite host, making him their most powerful adversary. Danger lurks around every turn and you're not sure who you can trust, because anyone could be the enemy, even your relatives or closest friend. Will they win the war and free the human race from slavery? Or will they themselves become slaves within their own minds? We may never know....
Review Page Hits: 0 today (884 total)
mediahook