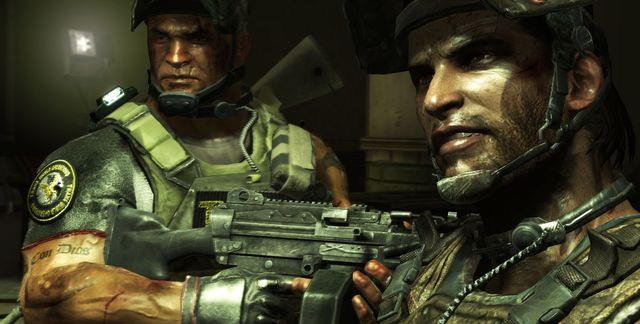 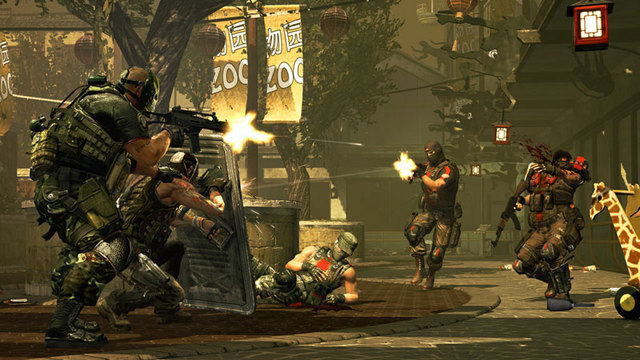 Ah Army of Two... I am in love with this series. Be sure to check out my review of the first Army of Two game here if you want the full experience of the series. This game picks up not very long after the first one ends, with the duo of Salem and Rios back at it again, this time in Shanghai. The game begins with a simple mission, but it never quite stays that way, does it? Everything quickly takes a turn for the worse, and before you know it you are in a crumbling city fighting off all kinds of mercenaries just to stay alive.


Gameplay - 10/10
The gameplay in The 40th Day has been greatly improved since the first game. The aggro system from the first game is still in place, so one teammate can take all the attention while the other player uses stealth to take out enemies silently. The biggest new addition is the morality co-op choices. At certain points the players will be prompted to make a moral decision, and depending on your choice you may be rewarded or punished. Following each choice are neat scenes drawn in a comic book style that show the consequence of your actions. Another cool addition is the "mock surrender" which allows you to trick enemies into thinking that they have you beaten, only to shoot them when the opportunity presents itself.

There are new enemies in the game that go beyond the challenge of the grunts found in the original. Heavy Soldiers will come at you with mini-guns, grenade launchers, flamethrowers, and shotguns, with the Shotgunner Heavy mini-bosses usually being the most difficult to dispatch. Weapons are still customizable like in the first game, but there are now many more options to make your weapon truly your own. Be on the lookout for hidden weapon parts in brown mailing envelopes throughout the game.

Your navigation system is updated as well, allowing you to see enemy ranks. Good players will use this to hold officers hostage and take out soldiers under their command easier. Another new addition to the game is civilians. Scripted parts give you the opportunity to save civilians from mercenaries, and these sequences play into the increased freedom of choice that players wield in the game. Whether you choose to save the civilians or let them be killed will effect you in the short and long run.

Sound - 8/10
There isn't much to say about this category. The guns sound realistic and crisp. All of the character and NPC voices are well done and sound pretty convincing (except for the random mercs with accents). The game offers 5.1 Dolby Surround which is nice. There isn't much music in the game, but there are a few intense melodies during some firefights. The only complaint I have is that you cannot adjust the music and sound effects separately.

Graphics - 7/10
Just like the first game, The 40th Day runs on a modified version of the Unreal 3 engine. Faces and shadowing look a bit dated but do not detract from the experience at all for me. The areas all look pretty nice, but there are a few textures that detract from the otherwise polished look of the game. Keep in mind, though, that this is a big game and always has a massive amount of action happening on-screen, so you'll hardly notice any graphical issues. I was a bit upset with the two-minute load times I encountered in some areas. The aggro looks like blue or red flames covering your body, which is one of the cooler graphical effects.

Replayability - 10/10
In a word, the replayability of this game is massive. When I beat this game I almost immediately played it again using new weapons and costumes. A second play through the game will also allow you to make all the other morality choices that you didn't get a chance to the first time. For example the first time through I was a hero and the second time I was a nefarious villian. There is also new downloadable content that can extend the life of your experience with The 40th Day.

Learning Curve - 10/10
Anyone that has played the first game will feel right at home in The 40th Day. Shoot and aim where changed from R2 and L2 to R1 and L1 which makes life a lot better for the PS3 controller.

End notes
This review was written assuming you played the first game. This game delivers everything you would want from an Army of Two sequel: bromance, weapons, huge enemies, moral choices, and local co-op. I would also add that my enjoyment of this game was helped by the fact that I got a good deal on it, so if you liked the original, pick up the 40th day and be prepared for a great time.
Review Page Hits: 0 today (152 total)
mediahook