Throne of Bhaal brings conclusion to one of the most challenging and enjoyable RPGs. 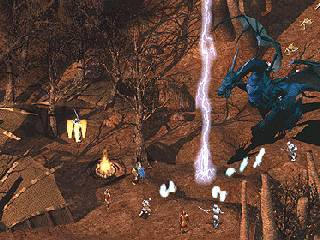 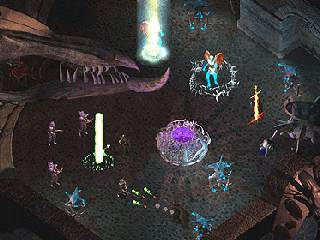 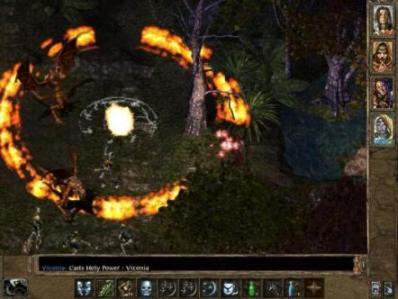 Baldur's Gate II: Throne of Bhaal is the conclusion to one of the most challenging and entertaining RPGs to date.

At the end of Shadows of Amn, you find that your character is a 'Child of Bhaal', the 'Lord of Murder', and that there are several other children.

As Baldur's Gate II: Throne of Bhaal begins, you find that the other children have begun a wave of destruction upon the Sword Coast, in an attempt to gain control of the 'Throne of Bhaal'. You set out to confront the other Bhaal spawn, and this starts an adventure through new lands and epic battles against new foes. The story climaxes to an end in which you have the opportunity to either become the next Lord of Murder, or destroy the Throne for good.

Baldur's Gate II: Throne of Bhaal also offers a brand new dungeon called 'Watcher's Keep', which has a Demogorgon to battle and defeat, which is known as the 'Prince of Demons'.

There is also a new character class that can be chosen from, which is called the wild mage. This class is the same as any other mage class, with a VERY notable difference. Anytime this mage casts a spell, there is a random chance that the spell will NOT do what is expected, and at times this could be directed at the target, or even directed onto the caster. Sometimes the effects are harmless, (outright FUNNY a few times, like birds appearing out of thin air) while other times they can be VERY dangerous; but this is a very entertaining character to play, and is HIGHLY recommended that you try this character at least once.

Some other changes within Throne of Bhaal that make it a VERY good game are the new class abilities, and the impish blacksmith that you have access to later in the game. The new abilities are divided into separate pools for each class, and you must reach a certain level of experience before you can choose from them. Examples of these abilities include the 'Deathblow' and 'Critical Strike' received in the warrior pool, or the 'Alchemy' and 'Magic Flute' that can be received in the bard pool.

Later in the game, you earn a stronghold within HELL, which once accessed, gives access to an imp named Cespenar, who is a VERY talented blacksmith. Cespenar can take the new items you find throughout the game and use them to upgrade your existing weapons, ammo, armor or staffs. These new item types are found within Shadows of Amn or within Throne of Bhaal. This is a VERY COOL new feature, and can be used for your advantage during your adventure. Some examples of these items include gems, rogue stones, dragon scales, Eye of Tyr and liquid mercury.

There are two ways that you can play Baldur's Gate II: Throne of Bhaal, and either way requires that the original Shadows of Amn be loaded onto your system. The difference is that you can either start a NEW Shadows game from the very beginning and play it through the end, and Throne of Bhaal will start RIGHT after Shadows ends -- or you can just play Throne without playing Shadows of Amn. I would HIGHLY recommend that you play both of them and begin a new Shadows game. The new character class and the wild mage will be available to you during character creation. You can also explore the new dungeon 'Watcher's Keep', which can be explored during chapters two, three or six during the Shadows of Amn campaign.

Another advantage of playing both games is that the experience cap has been enhanced with the addition of Throne. Before loading Throne, the experience cap is only 2,900,000. Once the expansion pack is loaded, your character can reach an experience cap of up to 8,000,000, which means that he or she can work all the way up to level forty.

The graphics are excellent. There is so much detail to the environments that it makes you feel as if you are truly part of an epic world.

The sound is excellent, with very distinct ambient sounds, and a music score that brings every battle and place you visit to life.

The game play and interface are VERY easy to use, with everything being a mouse-click away. The screen is setup the same way the prequels were, in that everything you need to access is conveniently placed on the gaming screen.

Replay value is VERY high, just for the fact that you can always go back and play the game as a different character class, seeing how different the game can really be.

The ONLY thing I did not like about this game was that some of the monsters were EXTREMELY hard to defeat -- even when adjusting the difficulty level. It is hard to enjoy a game that requires most of the time spent killing my foes or constantly loading saved games.

In conclusion, I would HIGHLY recommend that you play this game, and find out how the Baldur's Gate saga ends.